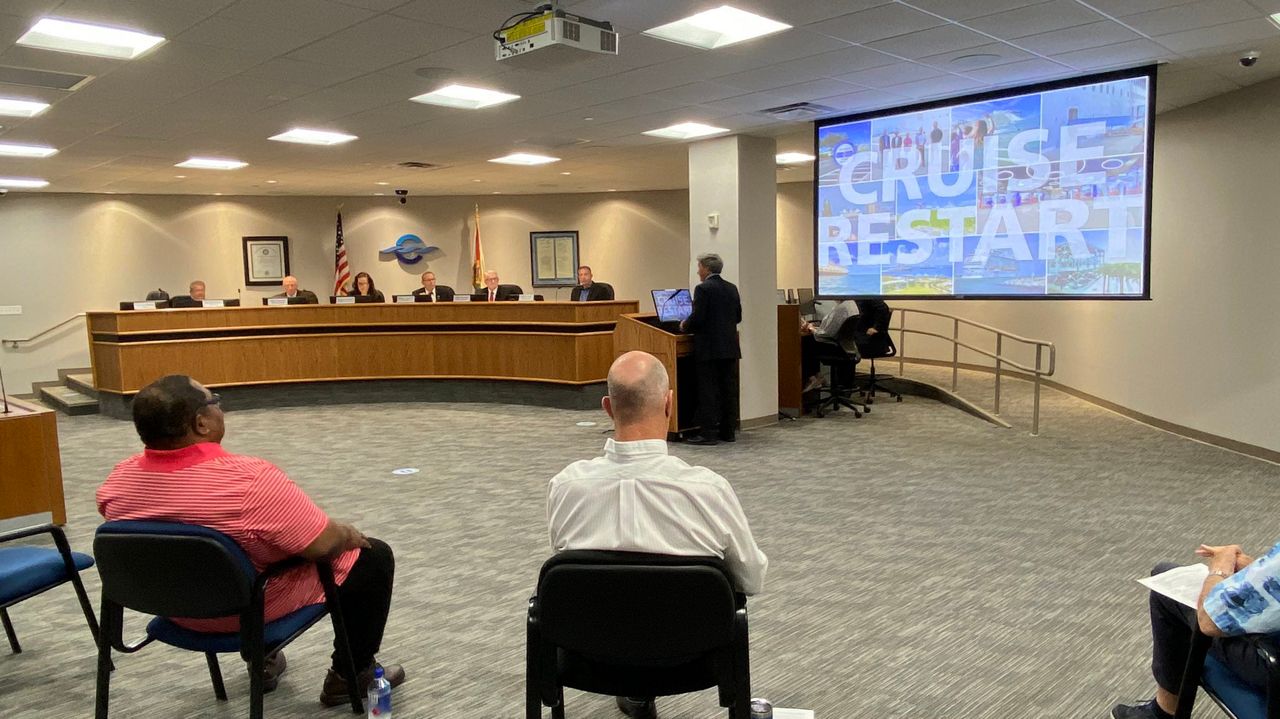 Capt. John Murray speaking to the Port Authority Commission on May 26, 2021. (Spectrum News 13/ Will Robinson-Smith)

Port Canaveral could start test cruises by next month

PORT CANAVERAL, Fla. – Test cruises will be the path forward for cruising out of Port Canaveral and those may not be too far off now.

​Port director Captain John Murray said test cruises for some of the cruise lines could come as soon as June.

“Everything seems to be on a fast track right now. And if you can get approval from the CDC on the simulated cruises, the next step is to actually get it going,” Murray said on Wednesday.

Murray's comments about the potential test cruises came after Wednesday’s meeting of the Port Authority Commission.

During his presentation, Murray discussed the paths that Port Canaveral and the cruise lines would have to take in order to resume paid cruises. One route involves having a ship confirm that 98% of its crew and 95% of its passengers are fully vaccinated prior to sailing. The other requires a simulated sailing with oversight by the Centers for Disease Control and Prevention (CDC). That CDC oversight could be done either in person or remotely.

Murray said because Port Canaveral caters to a family market and not just adults, the simulated cruises are their path forward.

“I’ve always said Port Canaveral would be one of the first cruise ports to get started, we may be a little behind others because of the vaccination issue with children. You can’t have a fully vaccinated ship if you’re sailing out of Port Canaveral,” Murray said. “Families are our market. We’re not an adult market, we’re a family market.”

As of Wednesday morning, Murray said that three cruise lines had finalized their agreements with Port Canaveral and submitted their plans to the CDC for approval. He said a fourth was finishing on Wednesday.

Murray said those documents are very detailed, noting that one of them was about 103 pages.

He confirmed that Disney, Royal Caribbean, Carnival and MSC Cruises were the four that had submitted to the CDC. Murray said Norwegian Cruise Line won’t start back up at Port Canaveral until November since he said they are not planning on doing a trial cruise out of Port Canaveral.

Several who were in attendance at Wednesday’s commission meeting were excited to hear some of the updates.

“It’s an important time. It’s like getting there close to Christmas, you know, and anticipating rushing out on Christmas morning and opening that big present,” said Paul Kellem, the assistant business agent for the International Longshoremen’s Association, Local 1359-1860.

“We’re ready to go. Our people are tired of just waiting, but waiting builds patience.”

Those connected to the industry have been painfully waiting for this time as well. Cynthia Anderson runs a travel agency that has since dried up with the loss of cruising. She had the double whammy last year of losing her father to COVID.

She and many others have been eagerly watching openings for test cruises and said the pent up energy will hopefully mean a surging recovery for the industry.

“People are ready to get back out there. And I think with the vaccines and with what everything’s doing and the cases are going down, there are thousands of people who applied for these test cruises,” Anderson said.

Another one of those eagerly waiting the return of cruising is Ed Patterson. The cruising enthusiast has cruised for more than 1,799 days with Carnival Cruise Line and applied to be among those on a test cruise, but hasn’t heard if that will happen.

Patterson said that he will be on one of the first passenger cruises on the Carnival Horizon out of Port Miami. Patterson received paperwork that stated it will be tentatively sailing starting on July 4.

“Of course, nothing is final until we actually get on the ship. I’ve lost like 80 cruises in the last year and a half, so I’m used to being turned off at the last moment. So, I’m just hoping that this goes through,” he said.

Back at Port Canaveral, workers are continuing to do what they can to prepare. They are scheduled to issue another 5,000 vaccine doses over the next few weeks and accommodate the crews of about 9 more cruise ships.