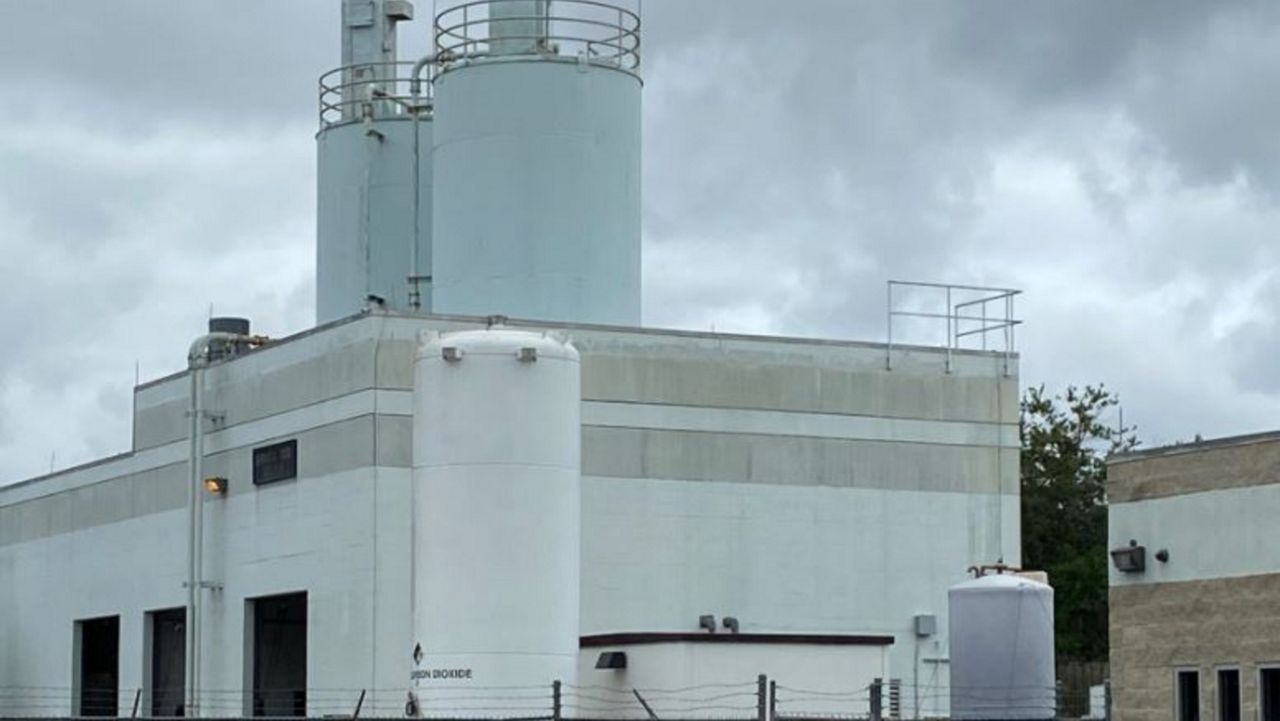 As of 1 p.m. Thursday, May 13, Brevard County stopped providing water fluoridation for the water supply in Mims. (Spectrum News/Will Robinson-Smith)

Brevard cuts off flow of fluoride to water supply in Mims

MIMS, Fla. — Brevard County Utilities stopped adding fluoride to the water supply in Mims indefinitely on Thursday, about 10 days after the Brevard County Commission voted to do so.


The process, called community water fluoridation, is recommended by health-care groups such as the Centers for Disease Control and Prevention and the American Dental Association as highly effective in improving oral health.

The action came after Brevard County Commission Chairperson Rita Pritchett, the district one commissioner who oversees Mims and northern Brevard County, questioned the practice during the discussion portion of the commission meeting, saying that fluoride was “terrible for us.”

While the meeting itself was advertised ahead of time, along with its six-page agenda, community water fluoridation (CWF) was not explicitly mentioned so the community didn’t have advance notice that the issue would be taken up by commissioners.

Melbourne-based attorney Joe Colombo, who is well-versed in municipal law, said that is not the normal practice.

“To bring it up under commissioners’ reports, at literally the last minute of the meeting — with no notice, nothing on the agenda — that’s very, very unusual,” Colombo said.

No public comments were able to weigh in on the decision because it occurred during the board reports portion of the meeting.

District 2 Commissioner Bryan Lober, who made the motion for the vote on May 4, said Thursday that he thought at the time the vote was to approve staff to look over the options for removing fluoride, but not going forward with the removal itself.

“First, fully I admit that I was incorrect in that assumption,” Lober said. “But I will say as well that even had we had everyone on the same page with respect to what the vote was, to actually take it out, I still would’ve voted the same way.”

According to the Brevard County Commission charter, the section describing public meetings states in part that they “shall contain an agenda of all matters to be acted upon.”

Lober said that because the fluoride issue didn’t change a county ordinance or a county code, it didn’t need to be explicitly advertised.

“I understand that that’s an argument to make, (but) I’m not aware of any case law that holds that we can’t take action on administrative or policy matters during a duly noticed board meeting,” Lober said.

He also noted that no one came to the following commission meeting, one regarding zoning, to voice a complaint about the commission’s actions on fluoride.

“If someone really felt that strongly, certainly they could’ve come to the next meeting, which I believe was a mere two days after the first meeting, 48 hours on the dot, to say, ‘Hey, why don’t you guys rethink this?’ “ Lober said.  “But I don’t recall us having a single individual.”

The commission did hear from some residents in Brevard County shortly after the vote, however.

Maria Stahl, the Brevard County health officer, sent an email to all five commissioners on May 5 stating her objections to the decision to stop CWF and provided a long list of organizations that support the practice, along with health advice from the Florida Department of Health and the CDC.

“One of the greatest health needs in Brevard County is access to dental care; so much so there is currently a task force specifically working on access issues for both children and adults,” Stahl wrote in her email. “Without CFW, the need for dental care will increase.”

Dr. Angela McNeight, the president of the Brevard County Dental Society, told Spectrum News 13 on Thursday that her organization had sent letters to the county commissioners and reached out several times over the past week but have not heard back on their requests to allow fluoridation to continue and for there to be a public discussion.

Lober said he did reply to Stahl ‘s email, explaining that Pritchett should be able to act on behalf of her constituents with the support of the commission if the matter only affects her district.

“To me, this is less of a science or medical issue than it is a question of local rule, of home rule and having the commissioner in whose district 100 percent of the benefit or 100 percent of the detriment, if there is any, will be felt,” Lober said.

“Being given that level of deference that frankly, if we start withholding from other commissioners, it creates massive issues or has the potential to create massive issues in getting things done in our respective districts.”

Colombo said that is the wrong way to look at the issue, considering how passionately some people feel about adding fluoride to the water.

“Respectfully, I differ with that opinion that if it’s not in my district, I don’t care about it,” Colombo said. “This is five commissioners working in unison on issues that affect the entire county. It’s not fragmented. It shouldn’t be.

“They should care what happens in other districts, and I think the community needs to be given the opportunity to comment on these issues and bring in experts and let’s see if this is a good idea or not.”

The discussion over community water fluoridation comes less than two years after the City of Melbourne grappled with the same issue in 2019. Melbourne residents brought up CWF at a number of city council meetings at the time, leading officials to study the issue and bring in public and expert input over a few months, city spokesperson Cheryl Mall said.

McNeight was among the chorus of voices who weighed in on the issue and said she was surprised to see how quickly the process moved in northern Brevard County.

“We had over 50 dentists attend those meetings, and each one of them stood up and said their beliefs on community water fluoridation and why we should keep fluoride in Melbourne’s city water at that point,” McNeight said. “And those conversations went on for such a long time that the Brevard County Dental Society was surprised at how fast this change happened and that we weren’t involved in any of those discussions.”

According to Brevard periodontist Dr. James Antoon, Pritchett was asked on May 7 what data she was considered when making the decision to call for ending CWF and pointed to some studies that have been refuted by substantially more scientific research.

He was part of the medical community members who originally helped educate voters when water fluoridation was put in place in Mims decades ago. In an email sent to commissioners on Thursday morning, he said, “Nearly 7,000 peer review studies have been conducted on this public health measure. Credible systematic reviews of this work find fluoridation to be absolutely safe and effective.”

He also addressed comments made about CWF in India that were during the May 4 meeting and said the two countries are not comparable:

“The groundwater fluoride levels in India range between 1.5 to 48 ppm (parts per million),” Antoon wrote in his email.  “This is roughly 70 times the levels recommended for drinking water in the United States. There are no adverse health effects at 1.5 ppm or lower. A reasonable comparison might be one glass of water being good for hydration, while 70 times that amount might cause problems. There are no credible scientific articles to suggest any relation to aging. There is an active Indian American Medical Association in Brevard County. They support CWF.”

Over time, the lack of CWF in Mims will have a negative impact on the health of children and adults, McNeight said.

“Research has shown that for cities that remove fluoride from the water and cease community water fluoridation, cavity rates increased from 50 to 146 percent over a three- to 5-year period,” she said.

Beyond stories in the local media, the county said affected residents will receive notice of the change on their water bills. The information will also be posted to the county’s utility website and emailed to customers for whom they have a valid email address.

According to the Florida First Amendment Foundation, the move to vote during the board reports phase of the commission meeting might not be illegal per the state’s Sunshine Law, but it disagreed with the method.

“The Government-in-the-Sunshine Law requires that meetings be open to the public and noticed,” the Florida First Amendment Foundation said in an email to the Brevard County Commission. “The Sunshine Law does not require commissions to provide notice of each agenda item. The failure to provide notice and lack of opportunity for comment will not likely invalidate the decision under the Sunshine Law.

“Nonetheless, it is concerning that the public had no advance notice and was not able to meaningfully participate. It is contrary to the spirit of the law and frustrates the purpose of open government.”

Sunshine law may not have been violated, but legal action may still be forthcoming nonetheless, Colombo said.

“’I’m not involved in any manner in this dispute, but I could see, I could see a lawsuit emanating from this. It impacts Mims residents’ day-to- day lives,” Colombo said.

The Brevard County Dental Society said it is still determining what it can do to bring back fluoride to the water in Mims, but McNeight said she hopes residents reach out to commissioners and that they, in turn, bring it back up for a broader discussion.

“At the end of the day, the only people that it’s going to hurt are residents of the Mims community who are not going to have this additional fluoride in the water,” McNeight said. “And for some of these children especially, this may be the only preventative health measure that they have.”

The county said equipment that adds fluoride to the water will remain at the Mims facility, in case minds are changed down the road.