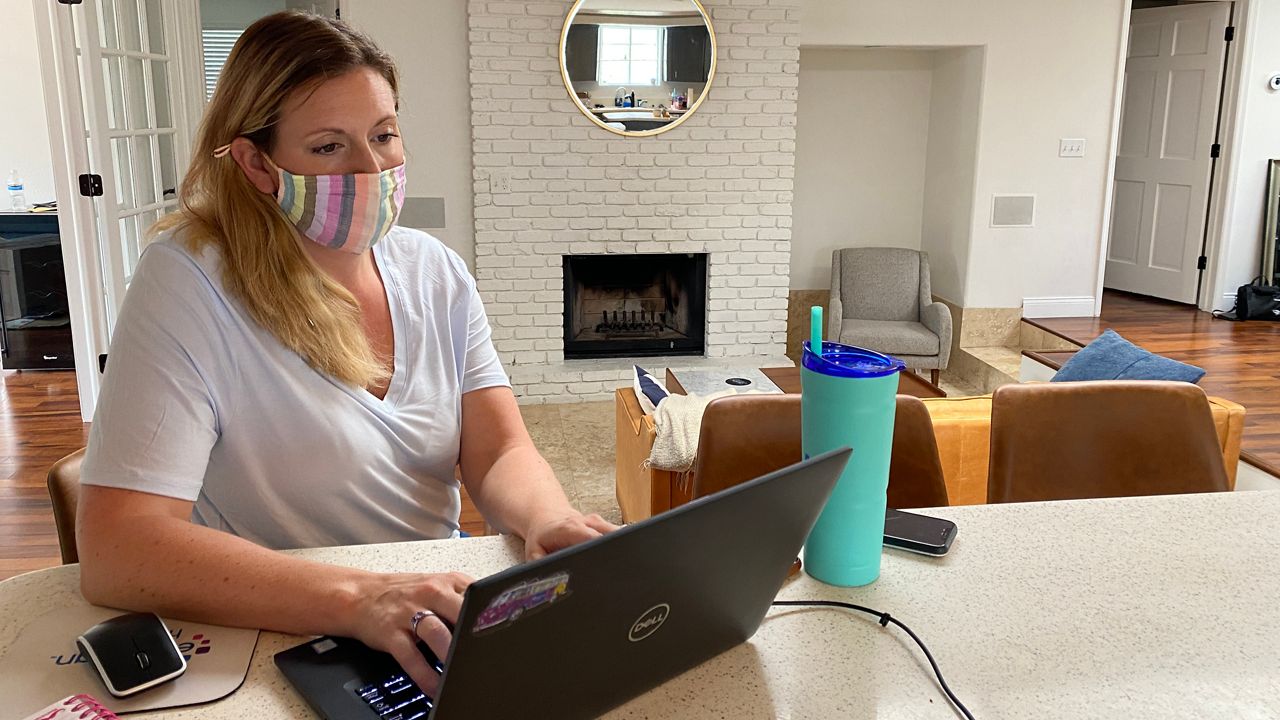 Charlotte Nowakhtar recently purchased a new home, but said because there are so few houses available to buy, it was difficult finding the perfect place to live. (Spectrum News 13/Molly Duerig)

MAITLAND, Fla. — Charlotte Nowakhtar said her family’s thrilled with the new home they just moved into a couple weeks ago. But with home inventory at an all-time low, finding and securing the house for themselves wasn’t an easy process.

“It was challenging, because everything was flying on and off the market so quickly,” Nowakhtar said.

Back in January, Nowakhtar said she and her husband found a different home, immediately falling in love with it at the first open house. They made a bid that same day, even offering to pay up to $20,000 more than the asking price. But the Nowakhtars were bid out by someone who offered to pay $700,000 in cash and waive the home inspection.

“There was just no way that the owner would say no to that, or that any other buyer looking to do financing could compete with it,” Nowakhtar said. “It was on and off the market before anyone could blink.”

Their story is a common one among would-be homebuyers right now, locally in Central Florida and on a national scale. The country’s inventory of homes available for sale fell to historic lows last year, even dropping below 700,000 for the first time on record, according to Realtor.com.

Here in Central Florida, Orlando Regional REALTOR Association President Natalie Arrowsmith said that as of April 19, there were fewer than 3,000 houses for sale regionally. In a healthy real estate market, it would take about six months to sell all the available homes, Arrowsmith said. In a “seller’s market,” it would take three months.

“If we sold every house we have on the market, we'd be out of houses in three weeks,” Arrowsmith said. “That's not even really a seller's market. That's just insane.”

Other local real estate agents agree the state of the market is unprecedented, with many people apparently wanting to hold onto their homes longer amid a global pandemic.

“Some sellers don't even want to put their house on the market, because even if they sell, where are they gonna go?” said Chris Bright, owner of Best Orlando Property Management.

At the same time, Bright said he’s noted an influx of more people moving to Central Florida from other states. New York and New Jersey transplants are nothing new, but now more Californians than ever appear to be moving to the area, Bright said.

“Now you’re seeing a lot more coming from San Francisco,” Bright said. “Four hundred thousand [dollars] is nothing to them. They’re coming and outbidding a lot of people.”

Another contributing factor may be the length of time many Americans have spent in their homes throughout the coronavirus pandemic. Annetta LaPointe, a local realtor with Wemert Group Realty, said what was once a small annoyance may now become a bigger deal for some homeowners.

“People who would have been OK with plastic countertops, or a community pool, now they're not OK, because they've spent 90 hours a week in their homes,” LaPointe said.

“In the bubble, people were using their homes as ATMs. Just cashing out the equity and buying things with it,” Arrowsmith said.  “These days, that's not what we're seeing. We're seeing people sitting on the house and holding onto it.”

While it’s tough to fully predict the market’s future, Arrowsmith said she thinks mortgage rates will begin to rise again soon, and with that we may see a buying frenzy.

For her part, Nowakhtar is grateful her family was able to find a home they love. But to other would-be homebuyers, she advises: Wait.

“If you can wait, do,” Nowakhtar said. “I mean, the interest rates are so low right now that it's tempting, but if you're not in a rush, I definitely would say wait a year, just because it's so stressful, because it's so competitive.”

If you must buy now, Nowakhtar said the key is to not delay once you find a home you like.

“Be ready to jump and don't hesitate. If you want something, make an offer right away,” she said.

TONIGHT @MyNews13... I explore how Central Floridians are reacting to a national shortage of homes for sale. New Maitland homeowner Charlotte Nowakhtar has this advice for would-be homebuyers: "If you can wait, do."