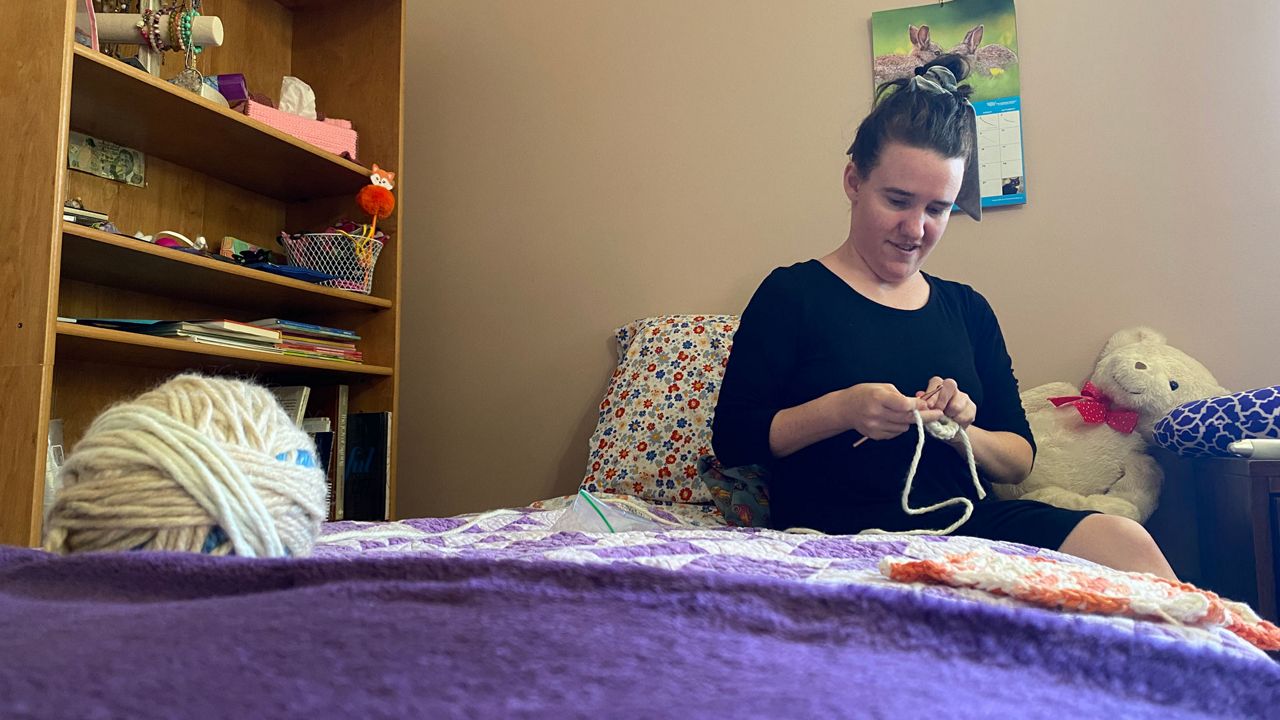 Since moving to this assisted living facility nearly a year ago, Emma has learned how to crochet. She said she makes gifts for family members and friends from her bedroom at the ALF. (Molly Duerig, Spectrum News)

ORMOND BEACH, Fla. — Today, Emma lives on structure. But before she moved into an assisted living facility (ALF) about a year ago, keeping up with daily tasks was a bit of a struggle.

“I was kind of having issues … remembering to take my medication, and all that,” said Emma, who requested Spectrum News only use her first name to protect her privacy.

The bubbly 32-year-old lives with grand mal seizures, a condition she’s learned how to better manage since moving into the ALF.

“It’s like having a whole big family,” Emma said of the staff and residents at her new home.

Martha Blumenauer owns the ALF where Emma lives with 10 other residents, a mix of seniors and people with disabilities who need varying levels of assistance. Blumenauer said she works to foster a supportive family environment, where residents still feel they have some agency over their own lives.

“The big picture challenge would be to find the best ways for everybody to be as independent as possible, but still have some guidance and assistance,” Blumenauer said.

It’s a pervasive challenge for housing providers who serve people with disabilities — particularly in Florida, where funding to support the population is strained.

“We are so slim on the housing,” Blumenauer said.

Down in the Orlando area, another unique living community attempts to address a housing shortage for people with disabilities. Quest Village is a 48-unit apartment community where residents live independently, with access to supportive services they can opt into if they choose.

For Yee, who lives with Asperger’s, daily walks with friends to the nearby shopping center have become a favorite routine. Yee plays Rummy on the sun porch, takes care of his personal finances and drives his car to his part-time job: he lives just like “normal people” do, in Yee’s own words.

“It is a community where everybody looks out for each other,” Yee said.

But Florida lawmakers recently passed legislation to permanently redirect a chunk of the state’s Sadowski trust funds away from the very affordable housing projects the fund was designed to support.

If signed into law by the governor as expected, Senate Bill 2512 will allocate some of the tax revenues coming into the state’s housing trust fund to wastewater grants and efforts to combat sea level rise. Housing advocates agree, those environmental projects are crucial for Florida to address – but not at the expense of the much-needed, often-harvested Sadowski funds.

“Really, persons with disabilities have some of the biggest barriers to finding an affordable place to live,” Nazworth said.

“There's no way you're going to find an apartment at that rate, plus buy all the other things like food, clothes and medicine that you need to do to sustain yourself,” Nazworth said.

Access to housing is a national issue. But the data is clear: Florida struggles particularly to provide its residents with enough safe, affordable housing. About 70% of Florida’s low-income households are cost-burdened, meaning more than 30% of their income is spent on housing and utilities, according to the National Low Income Housing Coalition.

Trey Price, executive director of the Florida Housing Finance Corporation, said in October that Florida’s affordable housing portfolio is essentially at “99 and a half percent” capacity.

Money from Florida’s state’s housing trust fund supports the creation of new affordable housing stock, as well as the restoration and preservation of existing buildings. Under the fund’s existing formula, more than $423 million was projected to go toward affordable housing for the upcoming fiscal year.

But under SB 2512, only $200 million is projected to remain, cutting the fund’s available monies for affordable housing by more than half.

Supporters of SB 2512 point out the bill prohibits the Florida Legislature from re-allocating any of the housing trust fund’s monies to other purposes going forward — essentially a state tradition at this point, as lawmakers juggle competing needs each year to balance the budget. Since fiscal year 2001-02, Florida legislators have swept more than $2 billion from the housing trust funds, per an economic analysis of the funds released by the Florida Association of Local Housing Finance Authorities in January.

“When you think of Central Florida and you think of how our region is built, if there isn't affordable housing… it's difficult to live here, and it's difficult for everyone to participate,” Gill said. “That's even more true for our population, for people with developmental disabilities, or any disabilities. To have appropriate housing and appropriate supports is a challenge.”

Back in Ormond Beach, Emma thrives in her supportive, yet independent living environment. With a job at the nearby ARC of Volusia County, she picks up a paycheck and makes new friends.

Emma’s only lived at the ALF for just under a year, so she’s still getting adjusted. She said she isn’t sure if she’ll ever live completely independently — although the option’s on the table.

“Some people might not think they’ll ever live independently and four years down the road, they're preparing to,” Blumenauer, the ALF director, said. “So they need their choices, they need to be loved, know that they're cared about, have a self-worth and feel safe.”