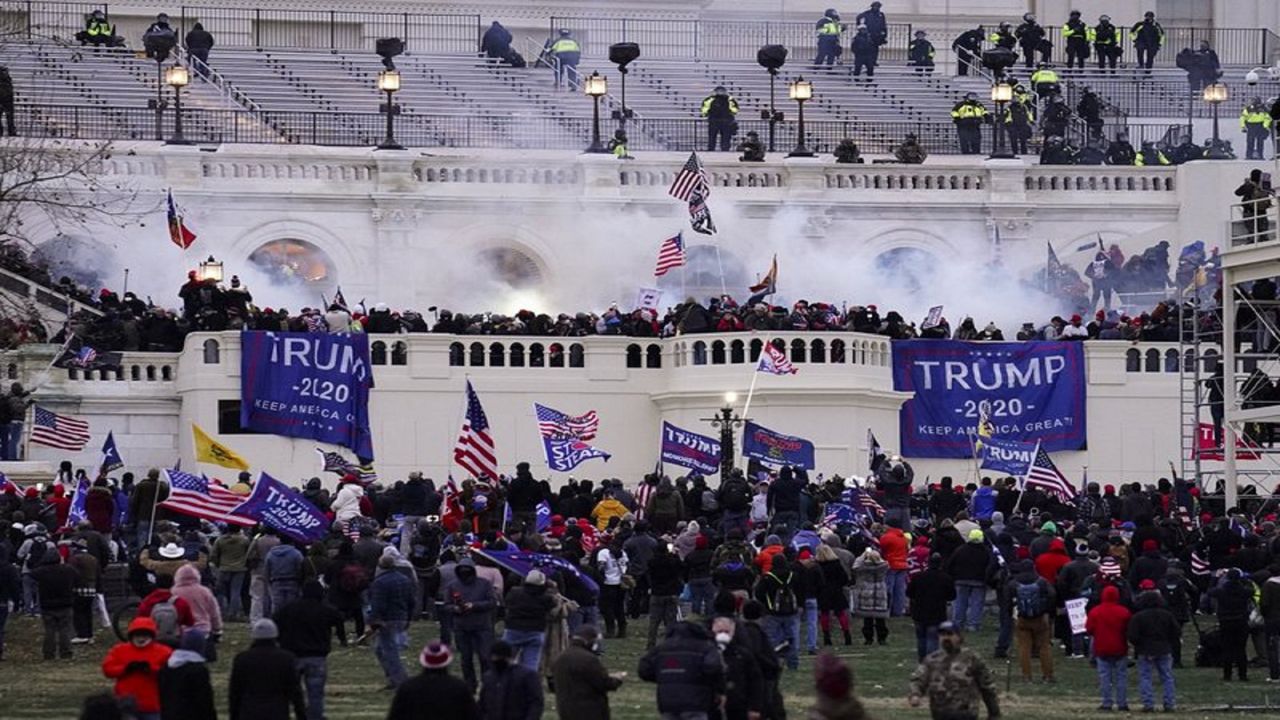 ORLANDO, Fla. — A 30-year-old Orange County man accused of participating in the January attack on the U.S. Capitol as a member of the Proud Boys, wore a T-shirt promoting the group to federal court on Tuesday in Orlando.

Arthur Jackman, 30, was released on a $25,000 unsecured bond and other conditions, including staying away from his wife's guns.

He ignored reporters' questions and remained silent after Tuesday’s hearing.

He had turned his black T-shirt turned inside out, hiding the lettering, for his brisk walk from the courthouse to an SUV that pulled over on West Central Boulevard to pick him up.

Earlier, when Jackman — shackled at his ankles and wrists — walked into the courtroom wearing the shirt, the words on the front, “Proud Boys did nothing wrong!” were visible.

The back was also visible during his 20-minute hearing before U.S. Magistrate Judge Daniel Irick at the George C. Young Federal Courthouse Annex.

It said: “I am a Western chauvinist, and I refuse to apologize for creating the modern world.”

The back also had an image of George Washington and a character giving an OK hand gesture — a suspected “white power” symbol.

In a criminal complaint filed by federal prosecutors in the District of Columbia, Jackman is accused of obstruction of an official proceeding, a felony punishable by up to 10 years in prison.

He is also accused of knowingly entering or remaining in any restricted building or grounds without lawful authority and engaging in disruptive and disorderly conduct. Someone convicted of that crime, which is a misdemeanor, could be imprisoned for up to a year.

Jackman will eventually have to travel to a federal court in D.C.

He also will have a pretrial hearing in Orlando, but a date wasn’t set Tuesday.

Federal prosecutors did not ask Irick to hold Jackman until his trial.

Instead, the judge imposed release conditions recommended by prosecutors, including taking his passport and restricting his travel to the Middle District of Florida and the District of Columbia.

He is allowed to travel between those destinations for court appearances.

Jackman is the latest in a string of Florida suspects tied to the Proud Boys accused of storming the U.S. Capitol on January 6 in an attempt to overturn the results of the presidential general election. Other Florida suspects include alleged attackers from another far-right group, The Oath Keepers.

In all, more than 300 people, many supporters of former President Donald Trump, have been charged in the siege.

The FBI got a tip about Jackman from an unidentified person described as a childhood friend.

Jackman texted a photo of himself inside the Capitol while wearing a mask and giving the OK hand gesture, agents allege.

Agents said in a document Jackman photographed and videotaped wearing a red plaid shirt in the U.S. Capitol.

The FBI interviewed him on January 19, when he reportedly told them he joined Proud Boys in 2016 to support Trump.

He thinks the election “was stolen,” according to a court document which states Jackman and “other Proud Boys were not there to infiltrate the Capitol as it was not a sanctioned Proud Boys event ..."

Federal investigators obtained Google records of Jackman’s phone and say he entered the Capitol at around 2:14 p.m.

He was inside various locations, including the northern end of the Capitol and inside the Senate chamber, federal officials allege.

When agents asked if he was in the Capitol or if photos would show him there, Jackman had “no comment,” the agents said.

Agents said Jackman was spotted with Joseph Randall Biggs of Ormond Beach, another accused member of the Proud Boys, before and after the Capitol attack.

Biggs, Jackman and others were captured on video marching on Constitution Avenue while chanting “Whose streets? Our streets!” and expletives.

Biggs was later captured on video inside the Capitol, according to the affidavit.

"In the video, a voice off camera says, 'Hey Biggs, what do you gotta say?' The person depicted below smiles broadly and replies, 'This is awesome!' before pulling his gaiter up to cover his face," a probable cause affidavit from the FBI said.

The video was live streamed on the Parler social-media site, the FBI said.

Biggs and other alleged members of the Proud Boys in the U.S. Capitol attack were equipped with “walkie-talkie style communication devices” on their chests, the FBI alleges.