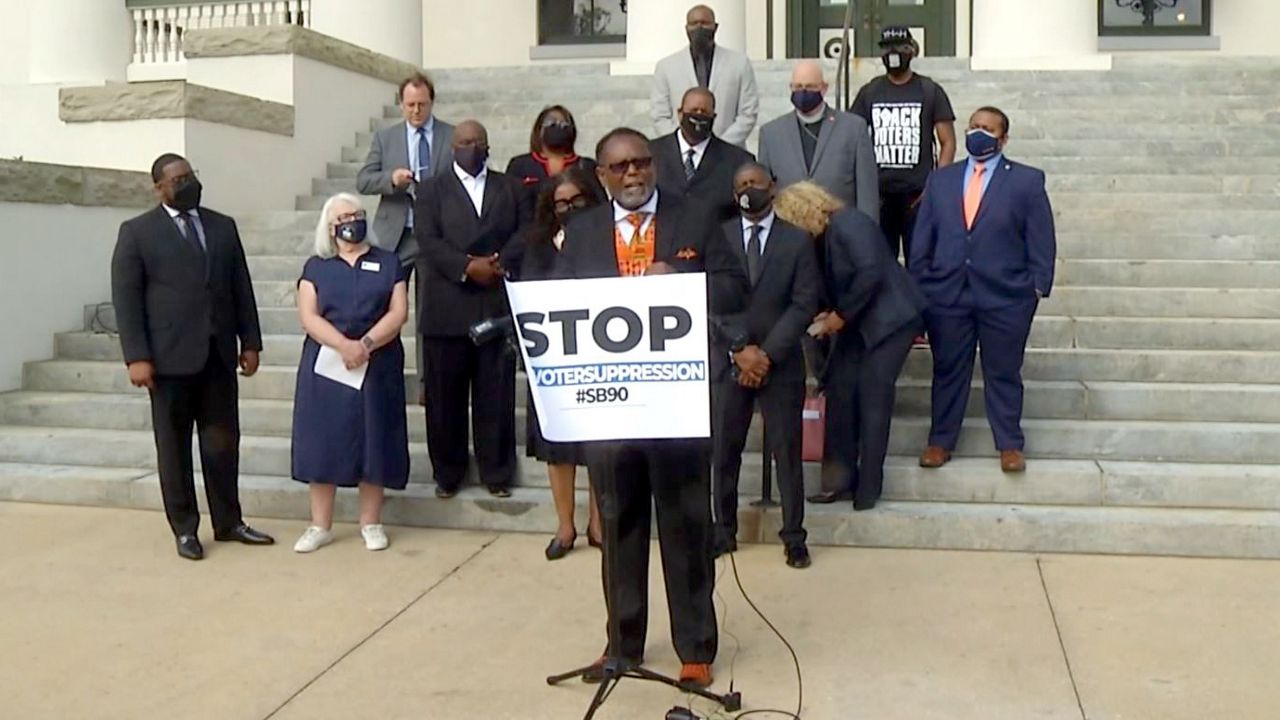 A coalition of Black pastors is calling for the Florida Legislature to reject Senate Bill 90, which would tighten the state's mail-in voting procedures. (Spectrum News 13)

TALLAHASSEE, Fla. — As legislation to tighten Florida's mail-in voting procedures speeds toward the Senate floor, a coalition of Black pastors is calling on the bill's Republican sponsor to reverse course — or be judged harshly in the eyes of God.

Gathering on the steps of Florida's Old Capitol this week, the pastors derided the legislation by Sen. Dennis Baxley (R-Ocala) as a shameless example of voter suppression grounded in systemic racism.

"Senator Baxley, you're hearing us, but you're not listening to us. But you will listen to God," declared the coalition's chairman, the Rev. Reginald Gundy. "Because you say you're a man of faith, and when you get to that point where you've got to stand up and be accountable for the decisions that you made, you'll have to answer for putting a bill forward that suppressed voters in this state."

​The measure, SB 90, would eliminate ballot drop boxes and require voters who wish to vote by mail to submit a request each general election cycle. Currently, one request ensures a voter receives mail-in ballots for two cycles.

Floridians voted by mail in record numbers in 2020, largely as a result of the coronavirus pandemic. With the extraordinary circumstances surrounding the election unlikely to repeat in 2022 and beyond, Baxley has argued it's time to reform the system.

"Some people say 'Why?' and I say why not? Let's try it," he said during a recent committee hearing on the bill. "We can always do it different next week or next month or next year, but why not try this? It may actually invigorate participation instead of it being so uninvolved."

Baxley has also argued that tightening vote by mail procedures will make Florida's elections more secure. State and local election officials have found no evidence that the integrity of 2020 election was compromised by the increased mail-in balloting.

The senator's critics, however, are dismissing his stated rationale for filing the legislation as utterly hollow. They contend his real aim is to restrict access to voting in a swing state with a rapidly diversifying electorate.

"We ask that you would touch his heart, touch his mind, stare up his soul, that he would pull this bill back," Gundy prayed during this week's gathering.

The bill has one more committee stop before it can reach the Senate floor: the powerful Rules Committee. Voting rights groups are preparing to mount a forceful denunciation of the measure there in hopes of defeating or significantly weakening it.