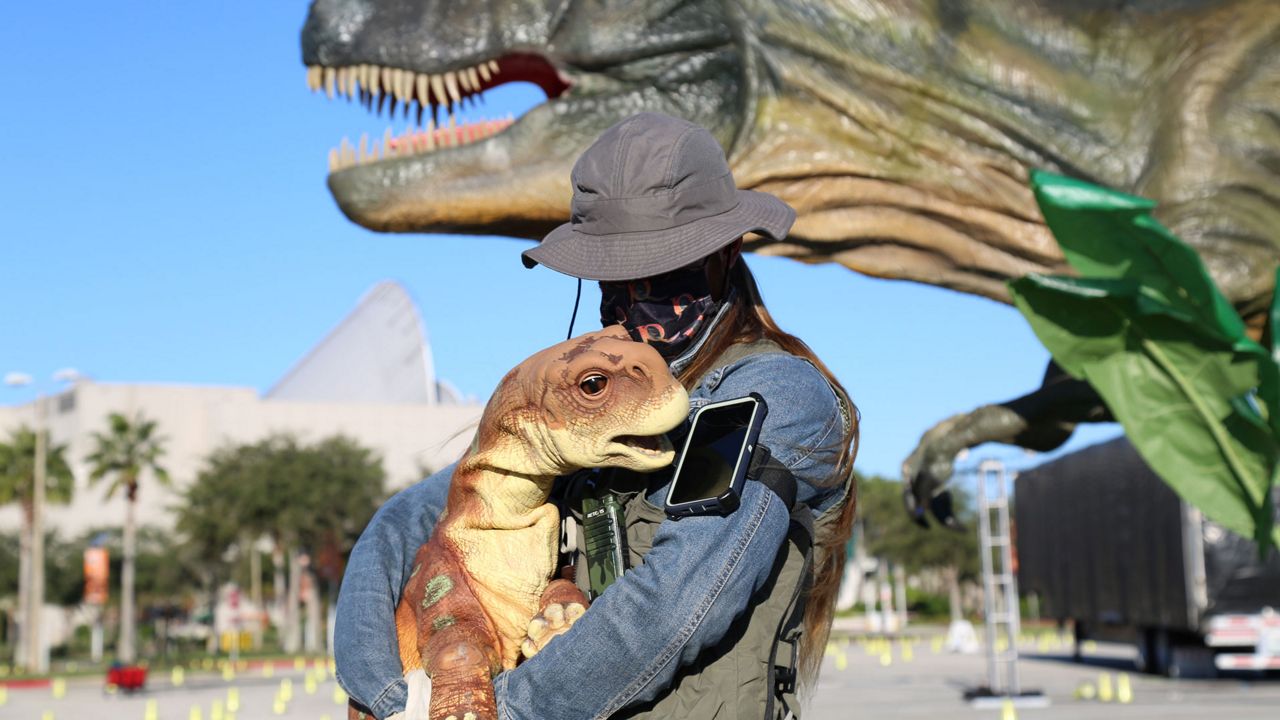 NOTE: This story is the second part of Rebound Ready, a three-part series looking at the pandemic’s economic and employment impact of the Orange County Convention Center and efforts to rebound.

ORLANDO, Fla. — Never before had the Orange County Convention Center gambled on an opportunity to let dinosaurs roam wild in their sprawling parking lot. But it was a move made not necessarily out of brilliance, but out of hope.

“The dinosaur folks approached us, and we said, ‘Hey, why not? We have an empty parking lot out there. Let’s give it a go,'” said Ray Walls, chief financial officer of the Convention Center.

“The interesting thing about the pandemic is, we’ve pivoted and gone to look at different kind of events than we normally would.”

The Jurassic Quest Drive-Thru experience ran for nine days in January and February. But for months before that, the Convention Center’s parking lots were empty, their meeting spaces bare and unused. Silence echoed through the halls that were normally filled with the hustle and bustle of packed trade shows and conventions.

Early in the pandemic, when shutdowns started to roll out, Orange County Mayor Jerry Demings revealed that canceled shows would cost the Convention Center, which is operated by the county, more than $600 million in lost revenue.

The sudden closures and canceled shows have been described as someone turning off a water faucet.

The impact for Orange County has been significant. Central Florida has the third most convention center space in the nation, behind Las Vegas and Chicago.

Through early February, those cities remained shut down, giving the Orange County Convention Center a leg up on building a comeback.

“Orlando has a tremendous reputation as a clean city and a safe city, and that’s been an advantage for us,” said Mark Tester, the Convention Center's executive director. “Another advantage is that we’re an outdoor city, and you can do that all year long.”

Tester said the Orange County Convention Center has drawn interest — and more importantly, contracts — from shows and events often held elsewhere that are now looking at Central Florida because of the center’s ability to host events.

“People that came weren’t there to kick the tires, they were there to buy, so the exhibitors that were there made sales. Their expectations coming in is numbers will be down, but the amount of sales they got covered their costs and then some,” Tester said.

The reactions so far, Tester said, have been positive, with sales shows making money for organizers and interest growing.

Among the first events to return in July 2020 was a modified junior national volleyball championship tournament. There have been a variety of expos since then, but all, Tester said, had a focus on keeping pandemic safeguards in place.

Tester said Convention Center capacity is still limited to 50% to respect social distancing guidelines. Officials have also placed up to 3,000 signs throughout the center to remind visitors about social distancing and mask-wearing, and have added hand-washing stations.

The shows themselves are still far from the size of normal times, when a single show could draw a crowd of nearly 100,000.

Tester said the biggest influence on trade shows and events returning en mass is widespread distribution of a COVID-19 vaccine.

“The vaccine is certainly a game-changer,” Tester said. “For what we’re doing right now, we really are targeting June, July for events to really start coming back in earnest, and we think that will be the time frame. We’re looking forward to a great fall. Our calendar for fall 2021 is packed. We literally have a lot of events slide to later in the year, cancel and move later, so as long as the vaccine continues and people feel comfortable, that’s what we’re targeting."

The thaw of the pandemic freeze is bringing hope for several reasons. Not just a return to "normal," but the more on the Convention Center schedule means more opportunities for those laid off to return to work, not just at the center itself, but throughout the area.

It's estimated the Orange County Convention Center supports, directly and indirectly, jobs for 20,000-30,000 people. Those roles include caters, show builders, and those employed at area restaurants and resorts.

“At the end of the day, we’re looking to get as many people to come here as possible, because the more hotel rooms are sold, the more people eating in restaurants, the more people out and about means more economic impacts for our community,” said Walls.

He said each attendee at the convention center creates an economic impact of at least $2,000, not to mention the collective millions of dollars in sales tax dollars that go to fund local government services and programs. That’s more than $1.4 billion economic impact in fiscal year 2019-2020, and more than $3 billion the year before that.

Walls said the revenue generated from events and economic impact have gone on to support not only government programs, but efforts such as Amway Center, Dr. Phillips Center for the Performing Arts, and other initiatives.

With show producers making commitments, and vaccines predicted to be distributed widespread, those like Walls and Tester are holding hope that a big picture rebound could be quickly approaching.