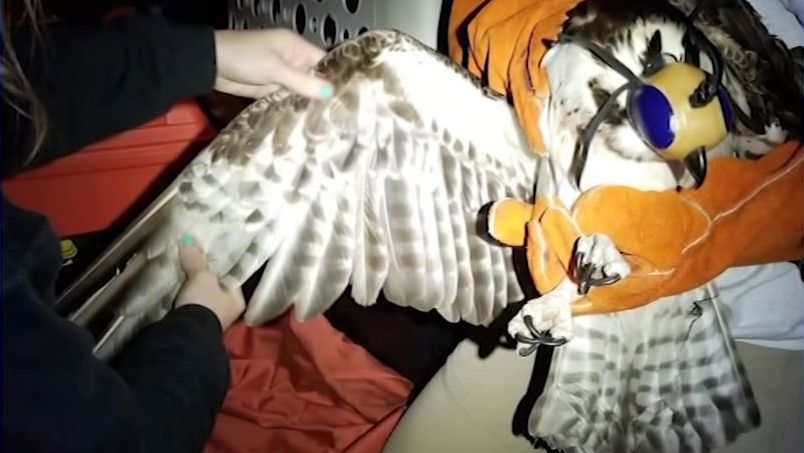 After being tangled in a tarp atop a 45-foot boat mast for an estimated two days, an osprey is rescued in Merritt Island Monday night. (Photo Courtesy of Wild Florida Rescue​s)

Upside Down and Trapped, Osprey Rescued from Boat Mast in Merritt Island

MERRITT ISLAND, Fla. — For one osprey, it was a perch that turned into a pickle.

But one rescue group went to new heights to help a bird in distress.

But her latest job was about to be "high" on her to-do list.

"The bird was stuck at the top of the mast," Prokop said.

The Melbourne based non-profit got a call late Monday night about an osprey stuck atop a 45 foot sailboat mast at Cape Crossing Marina in Merritt Island.

"He's up there on top, and this time it got snagged and couldn't get away from it," said Cape Crossing Marina​ Manager Capt. Mike Young, who reported the trapped bird.

The bird had been hanging upside down, possibly for two days, stuck and entangled in a piece of black tarp.

"He's up there on top, and this time it got snagged and couldn't get away from it," Young said.

PERCH PREDICAMENT: @rescue_wild goes to new heights to save osprey entangled in shredded tarp atop 45 foot tall sailboat mast at #MerrittIsland #Florida marina. Team effort to get bird down, cut him lose and see him fly away! Story tonight @MyNews13 #News13Brevard @Jon_Shaban pic.twitter.com/nanovvPl35

Once the situation was reported, an effort to save the bird quickly started.

"She's small, so it was easier for us to get her up there," said Young.

Prokop was hoisted up the mast in a bosun seat, kind of a swing, to get to the osprey.

"I'm not a big fan of heights, so with it swinging and swaying, it was a little bit nerve-wracking," Prokop said. "He was really tangled up, it was hard."

Once on the ground the team cut most of the tarp off the bird, checked him out, and let him fly away.

"They were great," said Young.

"Was just thinking, trust the sail, get the bird, don't look down," Prokop said with a laugh.