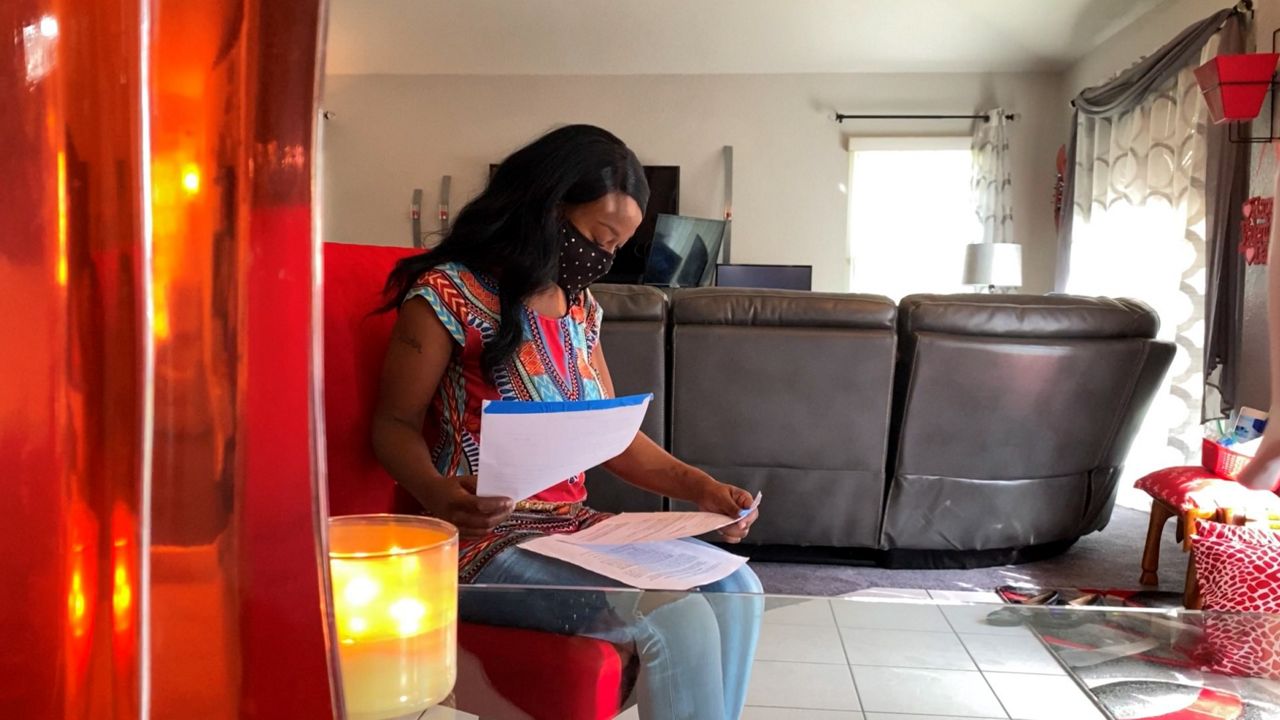 “I am having a hard time being heard, and I know what to do and I understand and I can ... go on the computer,” Sherita Harris of Polk County said. “I can do all these things, and it’s hard for me. So I can imagine [what it’s like for] someone who’s not.”(Molly Duerig/Spectrum News)

POLK COUNTY, Fla. — When Sherita Harris first learned her landlord was trying to evict her from her Polk County apartment in December, she assumed what many renters across the country and Central Florida believe to be true: that a federal eviction moratorium, put in place to curb the spread of coronavirus, would protect her.


But soon enough, Harris found out that wasn’t the case. She wound up being evicted from the apartment she shared with her two children, ages 15 and 20. And Harris believes that’s at least partly due to a lack of information she had about the eviction moratorium created by the Centers For Disease Control and Prevention on Sept. 4.

“It appears that our local courts are ... interpreting this law like how they want to,” Harris said. “They’re not properly providing people with the instructions to follow in order to be protected by the moratorium.”

It wasn’t until Harris’s case moved forward, and she was served with a 24-hour-notice from the court, that she said she learned the CDC moratorium may have been able to help her stay in her home.

Harris said after receiving that 24-hour-notice, she went to the Polk County Courthouse to file an emergency motion to halt her eviction in person. Harris then learned for the first time of steps she could have taken to seek protection under the CDC moratorium.

“[The court staff] asked me if I was aware of the CDC addendum, and I said no, and they said that this paper should have been attached to my eviction, which it was not,” Harris said. “And at that time, that’s when they handed me the paper.” The paper in question: an addendum to the court’s usual eviction summons paperwork, briefly explaining the existence of the CDC order and how to seek protection under it. It’s an attachment that Polk County Court is currently required to provide to all defendants in residential eviction cases, per an administrative order passed by the 10th Judicial Circuit Court.

Polk County Court’s public relations manager, Taylor Carson, told Spectrum News the court serves defendants their eviction summonses twice: in the mail and in person. If the defendant isn’t home at the time of service, paperwork is taped to the door. For the mailed notices, staff fold the required CDC addendum into an envelope along with the summons, Carson said.

Harris insisted that she never received information about the CDC moratorium in any of the paperwork she received from Polk County Court.

A thick filing folder of paperwork Harris has collected to document her eviction case includes the initial summons she received on her door, with a strip of blue paper tape still attached to the top. There’s no tape attached to the CDC addendum, an unfolded piece of paper Harris said she only received after going to the court in person.

By the time Harris filed her request for an emergency motion to halt her eviction and mentioned how COVID-19 had impacted her, it was too late. Court records show her request was filed at 3:17pm on January 21. At 4:45pm that same day — just more than an hour later — a judge denied her request.

Polk County Court maintains that to the best of their knowledge, they did attach the required information about the CDC moratorium to Harris’s summons.

“Everything that we looked into indicates that it was attached,” Carson told Spectrum News.

“Clear instructions need to be made, people who are facing evictions, on what needs to be done,” Harris said.

No Clarity, No Enforcement

Clarity is exactly what the CDC moratorium is lacking in order to be fully effective, according to housing advocates like Diane Yentel, president of the National Low Income Housing Coalition. The organization has drafted a letter urging members of President Joe Biden’s administration to strengthen the federal moratorium’s current protections for renters.

“Unfortunately, one of the shortcomings of the CDC eviction moratorium is that there are parts of it that are written vaguely enough that it allows for different interpretation by local judges and local courts,” Yentel said.

In Central Florida, those local interpretations vary quite a bit. While the 10th Judicial Circuit requires the Polk, Hardee, and Highlands courts to inform all eviction defendants of the CDC moratorium, the 5th Judicial Circuit doesn’t. That means eviction defendants in Lake, Marion, and Sumter counties aren’t routinely being provided information about the moratorium.

Jeffrey Fuller, chief deputy court administrator for the 5th Judicial Circuit, said that is partly because the court can’t legally advise defendants on how they should defend their case.

“The court has to be neutral,” Fuller said.

But the addendum provided by the 10th Judicial Circuit doesn’t specifically tell defendants to seek protection under the CDC order. Rather, it merely notifies defendants of the order’s existence and provides basic steps they can take to learn more about how it works.

Courts in the 8th Judicial Circuit are taking yet another approach. Lisa Funicello, director of board records for Flagler County Court, said while Flagler doesn’t automatically provide eviction defendants with information about the moratorium, the court does halt an eviction case whenever a defendant files the information CDC requires to show they should be protected.

“We do not provide that form but when we do receive them, they are docketed in the case, the judge is notified, and there is a stay placed on that case. If we are asked, we do point them to the CDC website to locate the form,” Funicello wrote in an email to Spectrum News.

Renters can seek protection under the moratorium by filling out a declaration form created by the CDC. While renters don’t necessarily have to submit that exact form, they do need to submit in writing all the same information that is outlined on the CDC form, and sign off on it.

But another issue with the CDC order, Yentel said, is a lack of enforcement — a problem that would persist, even if the order were to be clarified to firmly require courts and landlords to inform tenants of its existence.

“There's no enforcement of the order,” Yentel said. “So there's no federal agency, there's no individual person that's responsible for enforcing the order, or for requiring courts and landlords to inform tenants of the protections under the order.”

She said that lack of information consistency and enforcement means low-income renters, especially, are facing a dangerous information gap about protections that may be available to them.

“It's typically some of the more marginalized tenants who are most in need of the protections, who are least aware that the protections exist,” Yentel said.

After a brief stint staying in a hotel, Harris and her two children are now exactly where they never wanted to end up during the coronavirus pandemic: at the home of Harris’s 70-year-old mother.

“[My parents] are part of the most vulnerable group of people for the virus,” Harris said. “Everywhere I’m reading, it says that that was the point of moratorium, to not have people in this situation where spreading the disease is possible.”

Indeed, in the CDC’s own words, the moratorium was created “to prevent the further spread of COVID-19.” By some accounts, it has. A team at Duke University recently published research indicating that policies limiting evictions have reduced COVID-19 infection and death rates.

In order for any eviction moratorium to be effective at curbing the spread of the disease, renters and landlords alike need to know about the order and how it works. And in Harris’s case, she said that knowledge came too late.

Harris said she wanted to share her story so that other people, who may not be as tech-savvy or comfortable writing letters to the court, can learn from her experience and better help themselves.

“I am having a hard time being heard, and I know what to do and I understand and I can print ... go on the computer,” Harris said. “I can do all these things, and it’s hard for me. So I can imagine [what it’s like for] someone who’s not.”

For anyone in Central Florida facing an eviction during the pandemic, Harris offered a simple warning:

“Just make sure that you get all of the right, proper information, and the proper procedures and protocols in order to be protected by the moratorium,” Harris said. “If not, you might find yourself homeless very soon.”