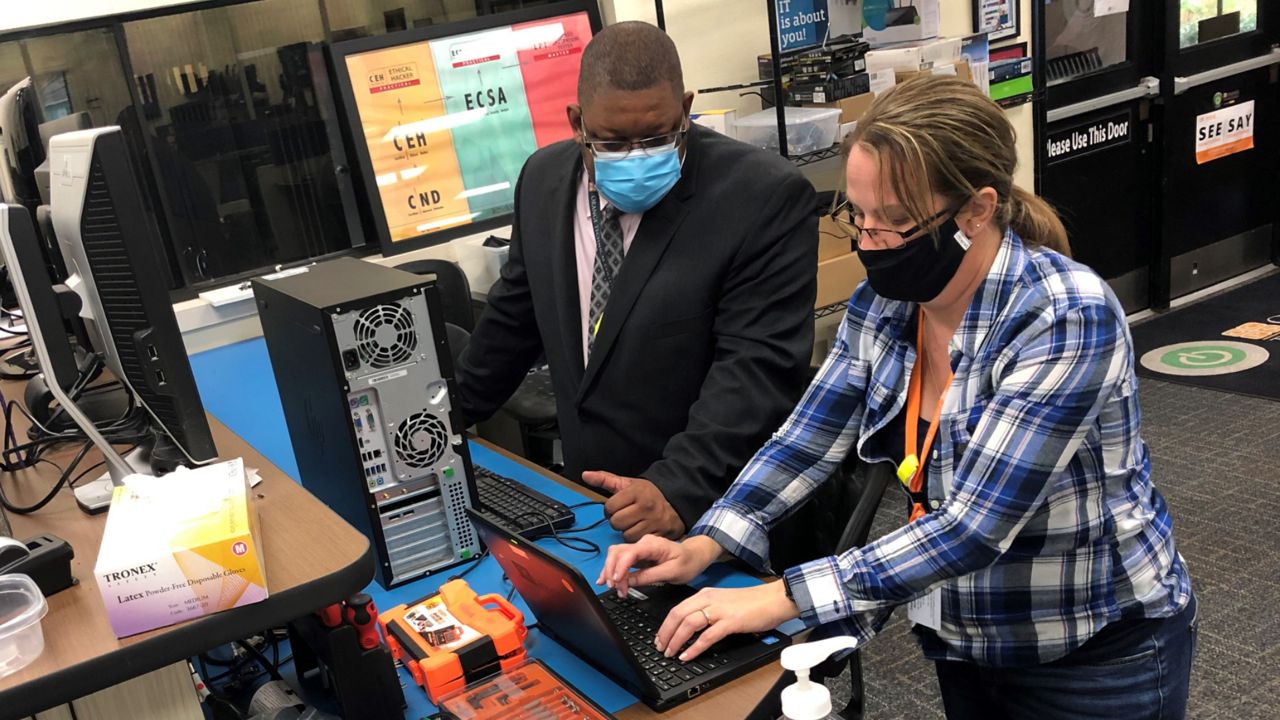 Danielle Stiles works with an instructor to learn information technology skills at Orange Technical College. A longtime server in the Central Florida area, she says the economic fallout of the pandemic helped nudge her to pursue a dream. (Julie Gargotta/Spectrum News)

ORLANDO, Fla. — At 43, Danielle Stiles finally stepped through a door of opportunity.

A bartender and server for more than 20 years, she decided to pursue a life-long dream to learn about computers and go back to school to obtain a job in infomation technology.

“I’m going to learn how to build a computer from the ground up, how to take a computer apart, how to troubleshoot it," Stiles said. “I’ve been wanting to do this for a long time, but I never had the gumption."

After all, her decades of work in the restaurant business — from sports bars to International Drive-area mainstays — were often fruitful. When things were busy, with a constant flow of customers, business was good, Stiles said.

Yet, it was wrought with uncertainty — "feast or famine," she said. And during this pandemic, things slowed down considerably.

“My pocket took a deep hurting. I lost my job as a result of COVID," she said. “This actually pushed me to follow my dreams, find a career I can retire from."

But, the Ocoee resident returned to school for reasons greater than herself: Stiles has a 24-year-old daughter and a 5-year-old son.

"I’m in here and I’m like, 'This is easier than I thought.' I didn’t give myself enough credit," she exclaimed. “This will be stable. This is what I need for me and my son.”

Some Fields Gaining Jobs Amid Downturn

Between the months of November and December, the U.S. economy lost about 140,000 jobs, many in leisure and hospitality, according to the Orlando Economic Partnership. It marked the first net job loss since June and July.

But, the economy — including in Central Florida — also gained more than 20,000 jobs in fields such as technology.

That’s no surprise to Orlando small business owner Salmagundi "Sal" Rehmetullah, who works in tech and is on the forefront of solutions.

“Our focus was, 'How do we enable the community to accelerate through a difficult time?,' " he said of his company, Fattmerchant.

Started in 2014, Fattmerchant helps small and enterprise businesses in receiving payments, both in person and online. The company experienced expansive growth, but like many others, suffered as a result of the pandemic.

Last March through May, general credit card processing was down 40% to 50%. Rehmetullah, the company's president and co-founder, explained that a major dip in volume led to a similar dip in business.

It also got a majority investment in the hundreds of millions of dollars, partnering with a firm from Knoxville, Tennessee. That investment led to growth and bolstered the need to hire about 40 people. The company still has openings in more than 20 positions, including in human resources and finance, sales, engineering, and product talent, Rehmetullah said.

And as a result, Fattmerchant prospered with its best third quarter to date.

"This year’s had its challenges, but we’re really proud of where we are. We’ve had our largest year we’ve ever done," Rehmetullah said. “We’re really on the path to becoming the next unicorn here in Central Florida.”

Fattmerchant is not alone. Other firms in the Central Florida tech scene have shown that their companies could rethink and retool amid the pandemic.

“Our tech-focused companies saw an opportunity to level up," said Sheena Fowler, who serves as the Orlando Economic Partnership's vice president of innovation. “Something the pandemic really brought for us was the absolute need for small businesses to digitize... just having the storefront or booth at the farmer’s market is no longer enough."

In Central Florida, Fowler said that extraordinary engineers fuel the technology industry, including at theme parks, where visitors “don’t come for a puppet show, they come for innovation backed by technology.”

And while the technology sector spans many industries, it's on the rebound, with research showing a need for workers now in software development, cyber security, and programming.​

“It was a really difficult year last year for everybody, but technology saw an opportunity to thrive," she said. “Smaller tech companies that were focused in software development really were nimble and able to move fast."

But if you think the barrier to entry to get into information technology is simply too tall, think again.

“Eighty, 90% of IT jobs do not require a bachelor’s degree. It’s more keeping secure, keeping a network up, setting up user accounts," said Dr. Cap Jadonath with Orange Technical College.

As the school’s senior director, Dr. Jadonath oversees the Orange County Public Schools-tied institution in both Winter Park and the Avalon community and said program enrollment is up.

To help them through the pandemic, Florida technical colleges received money from the state; For instance, Jadonath's Winter Park school got $500,000 in two or three installments. Some money went directly to help students, while other portions were allocated for operations, staffing, and offsetting tuition.

But, perhaps most importantly, Jadonath said federal CARES Act funding spawned new rapid credentialing programs such as A+ and network+ certifications. In the past, the school offered "career in a year" tracks in medical assisting, web design, and pharmacy tech, in which students left with industry certifications and often with plans to continue studies at Valencia College or elsewhere.

Now, almost 60 students are enrolled in OTC's fast-track IT program, alternating between virtual and face-to-face learning. Many will stack "micro-credentials" toward bigger certifications, which generally lead to higher IT cybersecurity jobs.

Now, Stiles, the longtime server who started IT classes on January 5, is stacking micro-credentials in a 10-month-long program. She hopes to one day snag a job as an entry-level field tech, IT help desk associate, or continue her coursework, diving into cybersecurity.

If you're unemployed like Stiles, you may be eligible for CareerSource funding, which pays for certain classes.

“I actually love it more than I thought I would. I’m excited to go to school," she said.