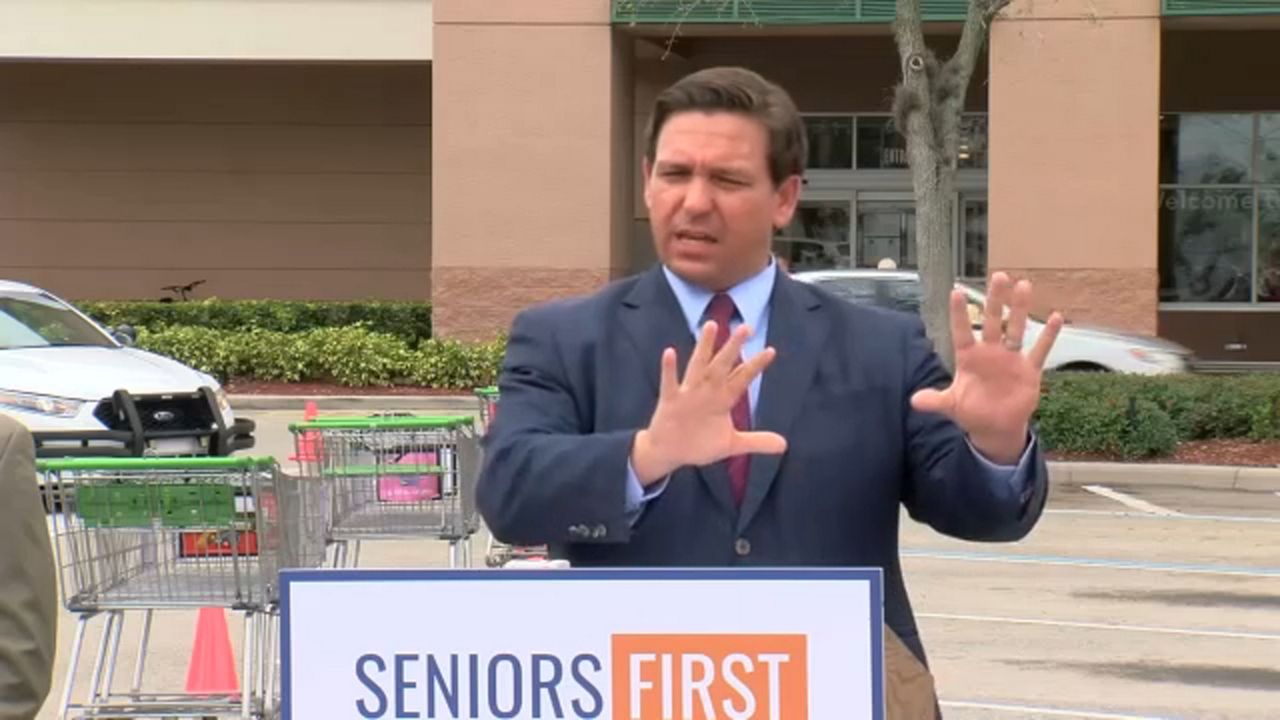 Publix Super Markets made four $25,000 contributions to the Friends of Ron DeSantis political committee in December, beginning about a month before the governor announced a partnership with the grocery chain to administer COVID-19 vaccines throughout the state.

On January 5, DeSantis announced that Publix and the Florida Department of Health would work together to distribute COVID vaccine doses to customers age 65 years and older.

Publix and the Governor’s Office rejected this week any connection between the Publix contributions and the vaccination program.

Publix spokeswoman Maria Brous told Spectrum News on Thursday that the company doesn’t discuss political contributions. But she said it was “important that I clarify that the connection being implied is absolutely incorrect.”

“As a Florida-based company with more than 750 pharmacies throughout the state, Publix is well-positioned to serve as a partner in distributing the COVID-19 vaccine to Florida's residents,” Brous wrote in an email. “Our large footprint, infrastructure and distribution network across the state, as well as our experience with administering the flu vaccine (and other vaccines) and online scheduling technology, gives us the capability to efficiently deploy the vaccine. That expertise is critically needed at this time.”

DeSantis spokeswoman Meredith Beatrice told Spectrum News late Wednesday that “the insinuation” of a connection between the contribution and the Publix vaccination program “is baseless and ridiculous.”

“Governor DeSantis is focused on putting Seniors First and is leaving no stone unturned in our efforts to ensure the vaccine as accessible as possible to Florida’s broader 4.5 million senior population,” Beatrice wrote in an email. “The Governor is building out Florida’s vaccine distribution infrastructure through innovative pilot programs, such as the ones we’ve launched with Publix, as well as with places of worship, senior living communities and converting state-run testing sites into vaccine testing sites.”

News reports show that Publix has contributed heavily in recent years to Republican candidates, including to Adam Putnam, a DeSantis opponent in the 2018 GOP gubernatorial primary, and has given to Democrats as well.

Aubrey Jewett, a University of Central Florida political science professor, told Spectrum News by phone Thursday he isn’t concerned about the Publix contributions and vaccine program as “a potential quid pro quo as I might be if there was suddenly a huge tax break that had been introduced in the Legislature for Publix.”

He pointed out that the vaccine program gives Publix good publicity but emphasized the public good. He acknowledged that he’s unaware of any financial details of the Publix vaccination program.

“I think the vaccine distribution program to Publix is a great benefit potentially to the public, and I do not see that it is some huge profitability boon to Publix, that somehow this is going to dramatically increase their bottom line because they’re giving these vaccines," Jewett said. “I look at it as more of a service.”

Patrick Llewellyn, senior legal counsel for campaign finance at the Washington-based Campaign Legal Center, told Spectrum News that “at a general level, large contributions can lead to or at least give rise to the appearance of corruption, and that’s why most states and the federal government set limits for contributions directly to candidates, specifically to prevent corruption or to prevent its appearance.”

The Publix vaccination program began at selected supermarket pharmacies in Citrus, Hernando, and Marion counties and on Wednesday grew to 12 Florida counties, with the addition of selected Publix pharmacies in Flagler, Volusia, St. Johns, and Collier counties.

The $100,000 from Publix represented about 20% of $502,734.84 in contributions to Friends of Ron DeSantis in December, according to the campaign finance database. Groups or individuals designated as political organizations contributed $120,203.88, and health care professionals or organizations gave $66,000, plus a $15,000 contribution from a medical consulting company.

Publix previously contributed to Friends of Ron DeSantis last January, when it gave $25,000. In 2019, it made one $25,000 contribution, according to the state's campaign finance database.

“They are a powerful economic force in the state, and they participate politically,” he told Spectrum News. “They make big donations to parties and candidates, and particularly to the Political Action Committees of those candidates. And they have a lot of policy issues that they are interested in that are being debated in Tallahassee.”

He added: “One way to make sure that you have access and some influence is to give big donations to the decision makers, and so that’s what they do.”