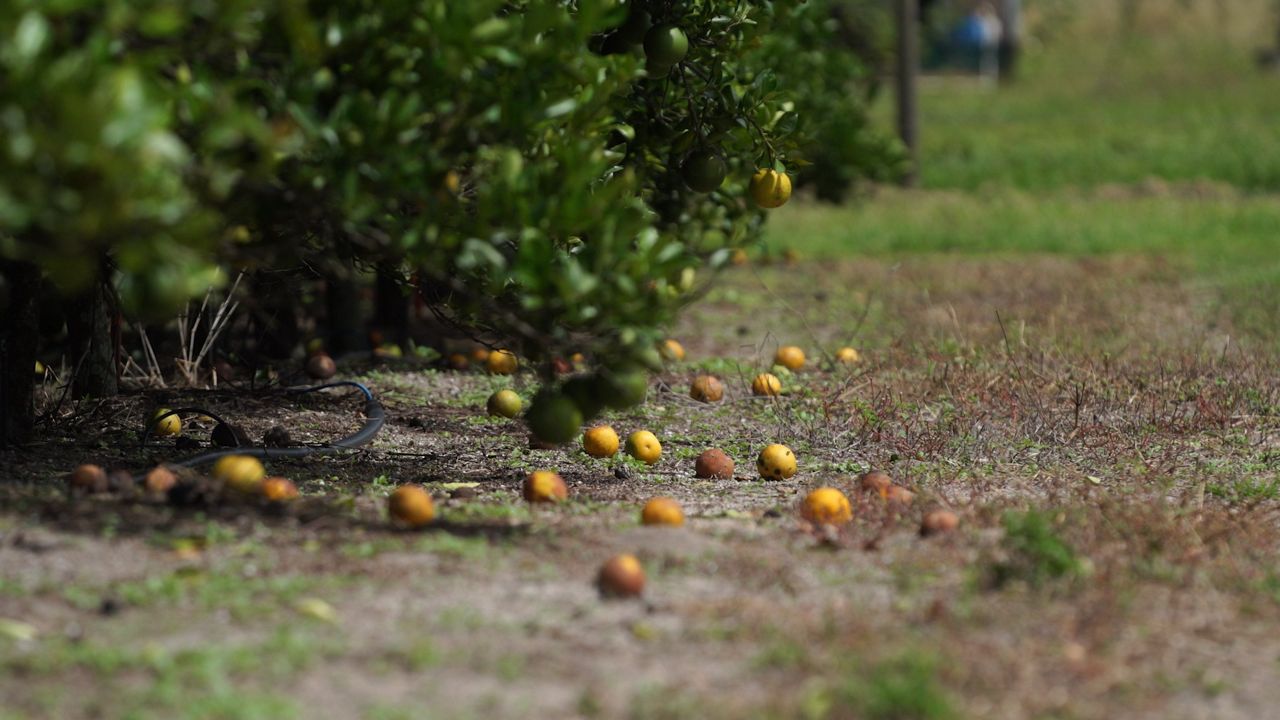 Citrus "greening" was devastating to the industry, but researchers have continued to work to fight it. Many growers are optimistic about the industry's future again. (Spectrum News)

This story is part of Spectrum News’ initiative, “Street Level,” which explores Florida through the history and culture of specific streets and the people who live there. You can watch part one of Street Level: U.S. 27 here.

In Florida today, citrus makes up a $9 billion industry, providing tens of thousands of jobs. For years, farmers have had to fend off freezes and economic challenges, but a new enemy has proven to be the industry’s largest challenge yet — citrus greening.

Also called HLB, which comes from the disease’s Chinese name, Huanglongbing, citrus greening has swept through Florida’s groves over the course of the past few decades. Dr. Fred Gmitter specializes in citrus breeding and genetics. He and others at the University of Florida Institute of Food and Agricultural Studies Extension in Lake Alfred study greening and the bug that carries the disease from plant to plant, called the psyllid.

The psyllid was first discovered in Florida in 1998, but at the time, according to Gmitter, the industry made a bad conclusion: "We know this insect moves citrus greening. But we don't have greening in Florida, so it's probably not a problem."

Experts said they think someone brought budwood, which is a bud with a bit of bark attached to it, from an infected tree into Florida from somewhere else. It’s thought the person then grafted the buds onto a rootstock, a young tree with an established root system, thus, infecting that tree.

The psyllid was then able to spread the disease from tree to tree throughout Florida.

By 2006, greening was found in 12 Florida counties. And almost a decade later, it had infected trees in all citrus-producing counties, decimating groves throughout the state.

“It sent tremors through the industry,” Gmitter said. “The fruit, in a sense, don't really mature properly, and the complex chemistry of flavor is fouled up. So, you just no longer have a very delicious, juicy piece of fruit.

Since the onset of greening, citrus production in Florida has decreased by 74 percent, according to the U.S. Department of Agriculture (USDA). As a result, the entire industry has been downsizing, with the number of growers dropping by nearly 5,000.

The Future is Citrus “You go through those hard times, you take your chips, you push them back up on the table, or you decide you're going to walk away,” Roe said. “And every time we hit that point, we push the chips back up on the table and said, ‘No, this is still good business.' "

Roe was born in 1958, and like Roper, said he grew up in a time when his family farmed groves that seemed endless. His grandfather’s favorite fruit-shipping label was Noble, for which they became known.

“I loved it from the time I was old enough to walk in the groves. There's something just healthy and natural about being a citrus grower,” he said.

They’d return to regulate the heater pots, sleep for a few hours in 28 degree-weather around a crackling campfire, then wake up in the morning to repeat the process.

It was difficult, seemingly endless, work, and with back-to-back freezes, it wasn’t always successful.

“I knew so many families that went out of business in the 1980s, and they were third-generation families that they never saw another generation,” he said. “They do a lot of other things now, but they don't grow citrus.”

Today, Roe still operates out of a packing house built in the 1920s. The Heart Pine wood is so hard, driving a nail into it is nearly impossible. When the wind blows, the house shifts, turns, creaks, and lurches, unlike metal buildings, which stand stoic.

“They went to a lot of prominent growers and said, ‘Hey, if we build you a packing house, will you ship on our rail line?’ Everybody took them up," he said. "There was probably 100 packing houses built [like this] throughout the state of Florida that were very similarly designed to this.”

Roe said he spent many nights wandering through the packing house. As he looks around it now and watches another generation of his family working, those he calls “G4s,” it fills him with nostalgia.

It’s the same feeling he gets when he heads home. After all, he and his wife bought his parent’s house, the one in which he grew up, plopped on a nearby grove.

“I couldn't imagine doing anything different,” he said. “It's just in my blood, and I can't think of anything more fun than waking up every day in an orange grove."

In addition to freezes, greening, too, has hit William G. Roe and Son hard. So, they adapted, Roe explained, no longer cutting back on any inputs to ensure trees’ survival. Now the company’s focus is on three varieties of citrus which have proven to be more resilient to greening. Roe himself also is on a board which funds new variety development across the state.

“There is enough money going into curative research that I am optimistic that we'll have a solution,” he said. “The holy grail is a cure. But, everybody right now is just treating symptoms. And so the better you treat symptoms, the better the trees look, the better the fruit is.”

For many Florida farmers, growing citrus is a passion. They find sweet blooms intoxicating and reminisce about the time when citrus along U.S. 27 stretched as far as the eye could see. The groves are still there, now fewer in number and farther south along the highway.

Roe’s determination to succeed outweighs his concern of how his longtime family company will continue to adapt to the ever-changing landscape of citrus farming.

“This is like the nectar of the Gods, it’s so sweet,” said Roe as he walks in one of his family’s groves. “It’s a long-term commitment. The water table is going to rise and fall for all of us. It’s going to be different as we move forward. We’re not going to let that fail."

For more on U.S 27 and other streets and communities across Florida, check out Spectrum News’ Street Level.