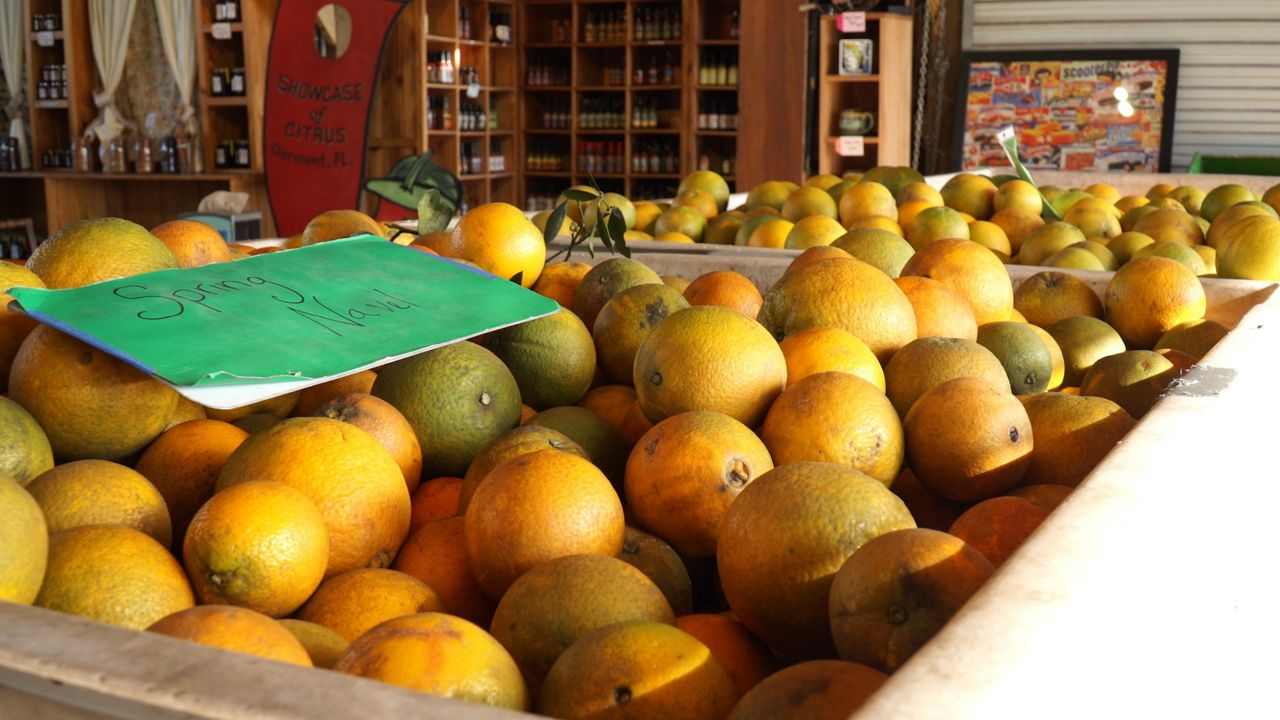 Citrus has been a profitable industry in Florida, especially along a 60-mile stretch of U.S. 27, but a variety of natural disasters and development have nearly wiped it out in that part of the state. (Spectrum News)

This story is part of Spectrum News’ initiative, “Street Level,” which explores Florida through the history and culture of specific streets and the people who live there. You can watch part two of Street Level: U.S. 27 here.

The citrus industry has helped nourish and sustain Florida for decades. Oranges are intertwined with our identity — from our breakfast tables to our state’s license plates. The beating heart of the industry in Central Florida can be found along a 60-some mile stretch of U.S. Highway 27.

Over the years, citrus has proven to be both profitable, providing large dividends for farmers in the market to gamble, as well as perilous.

Generation after generation had expansive farms and groves, as welcome centers doled out orange juice to eager Sunshine State visitors.

Today, many groves have turned to dust, wiped clean by development, decades of devastating freezes, cankers, hurricanes, or, most recently, fast-spreading citrus greening.

Citrus arrived via European explorers in the 16th century. But by the 1800s, it was a bona fide industry in Florida. In the 1940s, the industry was clustered in Central Florida as a big name emerged — Dr. Phillip Phillips. At the peak of his career, Dr. Phillips owned more than 5,000 acres of citrus groves in Florida. His groves spread over an incredible 18 square miles of land in Orange County alone and were a mainstay in eight neighboring counties as well.

By the 1950s, Dr. Phillips sold off his citrus holdings to Minute Maid, forever cementing Central Florida in the history books as the backdrop for an important industry.

Florida is the nation’s largest producer of orange juice, even today, with the economic impact of $8.5 billion.

“With the advent of railroads after the Civil War, citrus really became a major crop. Land speculators would buy land, and they would market this land in places like Chicago or Cleveland for people to come down to Florida,” he said. “They could buy 20 acres of land and grow citrus.”

Along the spine of the state, an elevated ridge just south of Ocala, orange groves grew alongside U.S. 27. Prior to Disney’s arrival in the early 1970s, citrus provided a major attraction, with agrarian destinations like Cypress Gardens tempting decades’ worth of visitors with romanticized versions of the Old South.

The Gardens, billed as Florida’s first theme park in 1936, was sold to Legoland in recent years.

For farmers, citrus also provided a pathway to a good lifestyle; a payoff that, at its boom, was worth the gamble for many budding entrepreneurs, like those in Charles Roper’s family.

“They came down to see if they could make it happen in Central Florida,” Roper said.

The fifth-generation Florida citrus grower said that tough times, like the Great Depression, fueled individual farmers to join forces and form the Roper Growers Cooperative in 1947.

“We can either file bankruptcy, or we can all go together, join a co-operative, pool our resources together, and work our way out of this,” he recalled his grandfather saying.

Soon, his family’s business blossomed, and not just the groves in Arcadia, Holopaw, and elsewhere. At one point in the early 1970s, they spanned 4,000 acres. But off-shoot ideas and innovative practices grew. For instance, they began providing fertilizer to other farmers under the name Diamond R. Fertilizer. They were also perhaps some of the first in the state to contour their groves, or plant the trees to follow the natural slope of the field, thereby helping combat erosion.

As pilots from the war looked for jobs, and old military, Bell-type helicopters sat idle, Roper’s father, Bert, devised an idea to start aerial spraying of crops, outfitting the helicopters with booms. His father also pioneered a system for more efficiently spraying trees and was first to introduce a juice concentrate plant in south Central Florida.

“He went to the board of directors and Dad said, ‘There's this thing that's been worked on and it's for concentrating citrus juice, and I think we need to put one here at this plant. And if you give me a half-million dollars, here's what it's going to take to do it,' " Roper said of his father. “And the board of directors said, ‘Son, you don't know what a half-million dollars looks like.’ And Dad looked at him and said, ‘Give me 90 days and I'll show you what it looks like.’ And then he did.”

U.S. 27: Bloodline of the Industry

Charles Roper grew up in the groves. He spent his childhood watching harvesting equipment roll through and launching leftover fruit in citrus fights with his brothers and sisters as he darted in between bushes.

As his siblings strayed from the family business over the years, Roper remained by his father’s side — just as U.S. 27 remained the gateway to getting rich.

Others, like Archie Ritch, who runs a roadside fruit stand along the highway — fittingly there for 27 years — cashed in, too.

“Money really does grow on trees in the form of oranges. But you gotta work for it,” Ritch said. “I tell my grandkids, ‘When I see orange, I really see green.’ So, it's just our way of making a living.”

He remembers when all anyone could see along the road was citrus, likening the aroma of citrus blossoms to a “fog” blanketing the roadway.

“As far as you can drive, it was just orange trees, you know, left to right, east to west,” he recalled.

“You could not go anywhere without smelling orange blossoms, which to me, is one of the most phenomenal scents in the world,” Roper said.

But freezes in the late 1980s put many farmers out of business, taking bank accounts from black to red. It also pushed the industry itself farther and farther south down U.S. 27. 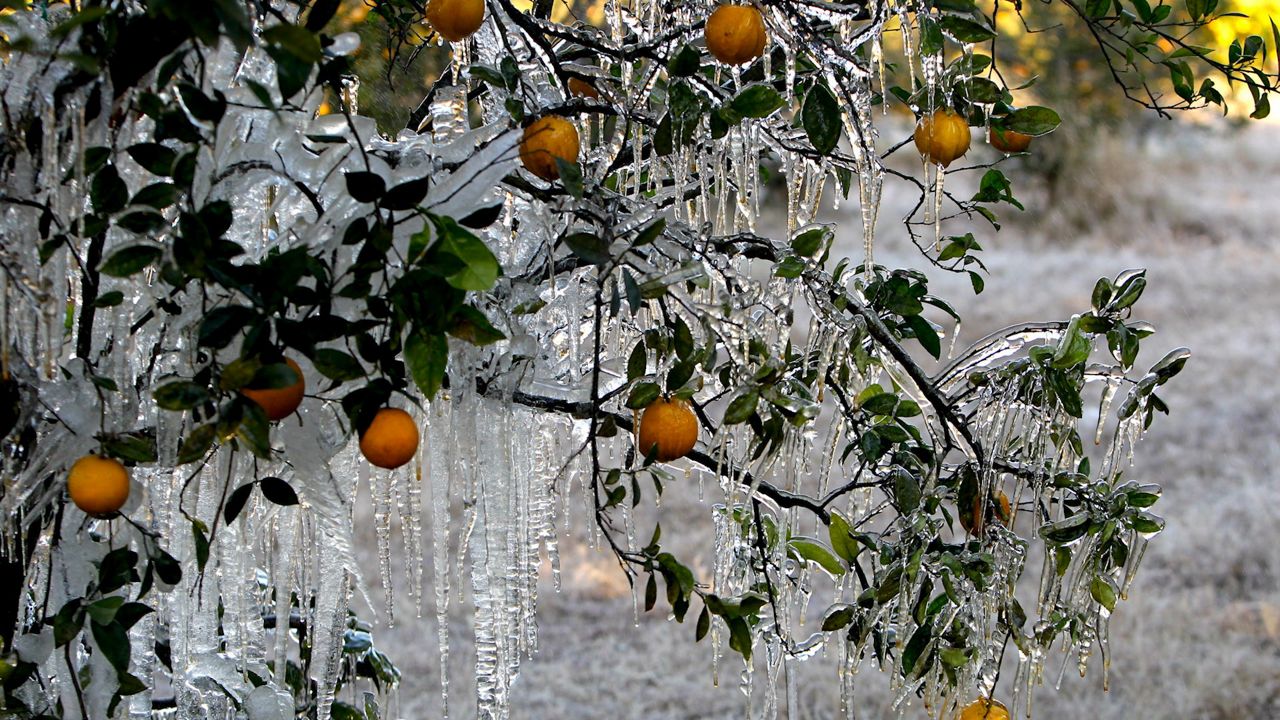 “One memory that I'll never forget was actually going out of the house and walking into the groves and hearing what sounded like gunshots,” Roper said. “And it was the trunks of the trees actually splitting from freezing.”

Another change Ritch and others have been fighting is development — as diggers tear up former groves, and farmers find it cheaper to sell off land than fend off freezes. “The development on 27 is primarily due to Disney and its proximity to Disney World. I don't think you're going to stop that one either,” Ritch said. “So, the industry is just changing, it's all. It's not going to go away.”

Though Roper Growers hung on, by the 90s they saw that the writing was on the wall. They began selling off citrus fields, though they still grow some citrus, supplying raw oranges to Citrus World and Florida’s Natural. Though it’s nothing like citrus, a “farmer’s a farmer,” Roper said decidedly.

Back in 2004, Ritch started selling ice cream made with juice squeezed from his oranges. Over the years, he tacked on other assorted items, from jellies and jams to honey.

Now, he takes visitors on farm tours aboard “limousine” golf carts, canvassing their 23 acres of peach, blueberry, and strawberry fields before they pick oranges.

“We've tried to diversify a little bit, so we're not just dependent upon citrus,” he said. “People come down here for the winter. They leave their family north, and they’re just looking for a nice, wholesome place to come. And we kind of fit that bill.”

But, the epitome of diversifying citrus operations could very well be found at Showcase of Citrus in Clermont.

Step inside the operation off U.S. 27 and it’s like stepping back in time — nostalgia, hodgepodge, roadside Americana, everything citrus. Showcase offers daily tours aboard a monster truck off the 2,500-acre ranch, as well as citrus-picking excursions. John Arnold’s grandfather started the farm outside Winter Garden more than half a century ago.

“In those days, if you had a five-acre home site and you planted citrus around your house, you might be able to send your kids to college just with the fruit that came off those trees,” he said. “My parents would come out on the weekends, and I just couldn't wait to get out here and get out to the farm, feed the cattle, and pick oranges.”

But Arnold realized in 1989, after a decade of devastating freezes, that he had to offer more than just the oranges in the groves because the industry he so loved was changing.

“If we were out of oranges for a year or two, we have a lot of other things going on where we’ll be able to continue to stay open,” he said. “The core strength of this operation is diversity.”

But for farmers, it wasn’t just the cold snaps which forced adaptations. It would be a more formidable foe that has proven to be the single biggest threat to the industry. We’ll have more on that in Part Two.

For more on U.S 27 and other streets and communities across Florida, check out Spectrum News’ Street Level.