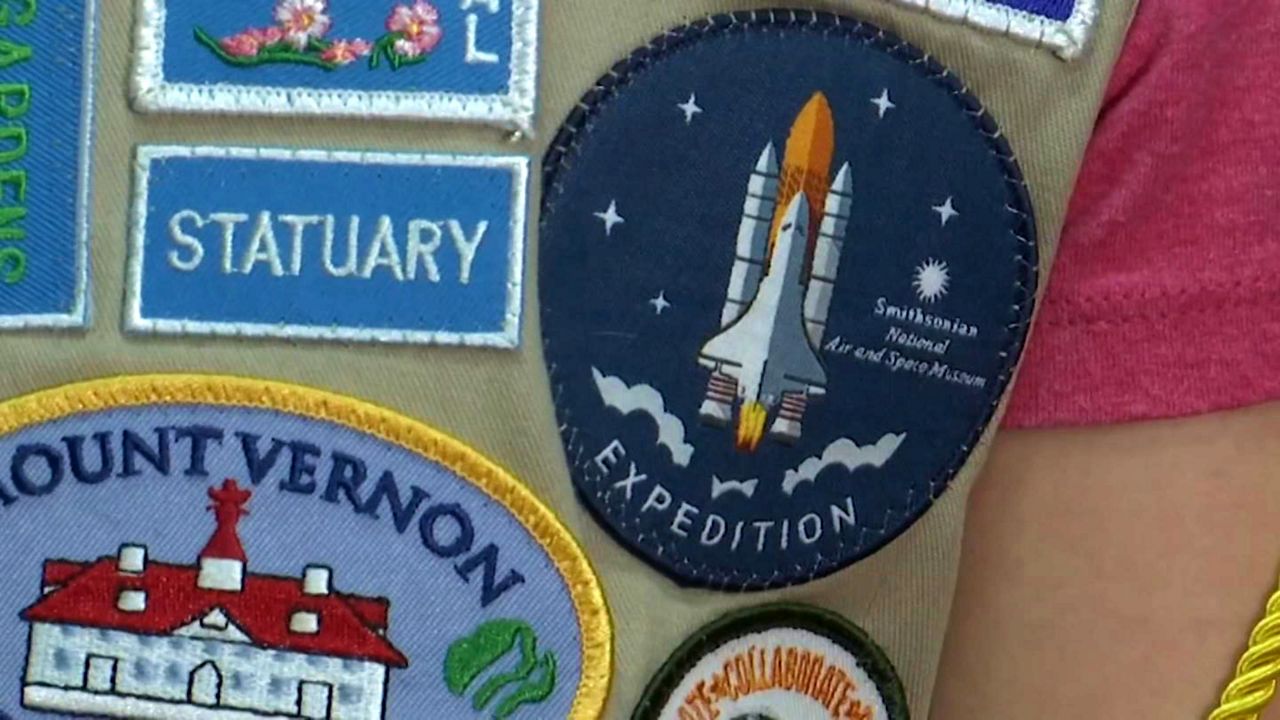 Marie Young has more than 100 badges. She's hoping next to get an experiment sent to the ISS as part of "Making Space for Girls". (Spectrum News)

A Badge in ISS Experiments? Contest Gets Girl Scouts Interested in Space

CELEBRATION, Fla. — In just a few days, all eyes will be on the sky along the Space Coast as four astronauts lift off, bound for the International Space Station.

Many people are hopeful that this launch, and the renewed interest in space, will spark an interest from young women and girls to enter STEM programs.

“I love space, I love looking up at the stars and thinking about the different possibilities,” said Marie Young, a Girl Scout from Celebration, Fla.

Young, 16, has earned more than 100 badges in her years as a Girl Scout. So when she heard about a contest that would send a Girl Scout’s experiment into space, she wanted to dream up an idea that was out of this world.

“I entered an experiment to send two Girl Scout cookies to the International Space Station to see how they would do with no gravity and no air,” Young said.

“The content blew us away. These girls are on it,” said Maryann Barry, CEO of Girl Scouts of Citrus Council.

Girls could design a badge, write an essay or create an experiment that could be done on the ISS. Ideas for the contest came in quickly.

“Curiosity about how things that are normal everyday things, like growing plants, watching ants walk around on the ground, how would that be different in microgravity? So the girls are thinking about these things,” Barry said.

More than 1,000 submissions came in from 689 Girl Scouts in 46 states, as well as Washington D.C., Puerto Rico, even as far as Germany and Japan.

Called "Making Space for Girls," this contest is a collaboration between the Girl Scouts and the nonprofit Space Kids Global, with the goal of getting girls interested in science and STEM programs at a young age.

“When kids come up after a presentation, they go, ‘I didn’t know there was other jobs in the space industry other than astronaut.' And I think it’s very important to get that message out to them,” said Sharon Hagle, CEO and founder of Space Kids Global.

The earlier you expose young girls to these programs and careers, Barry said, the more likely they are to follow the path.

“And it’s important for us to make sure that they begin to understand that a young age that these careers are available to them,” she said.

A future astronaut for Virgin Galactic, Hagle said this contest is getting hundreds of young girls looking up at the sky and thinking about the possibilities and careers that could get them there one day.

“There are so many opportunities, and living here in Florida, we have a front-row seat for the big race to space,” she said.

For Young, she says win or lose, she’ll be at the Space Coast watching as a Girl Scout’s ideas are launched into space.

“I can’t imagine being there next year when the launch goes up and we saw girls' stuff go into space, it’s just incredible,” Young said.

A panel of space industry leaders, including two NASA astronauts, will judge the Girl Scout entries for the contest in January.

The winning ideas will be launched next summer to the International Space Station.​ For more information, visit the Space Kids Global website. ​