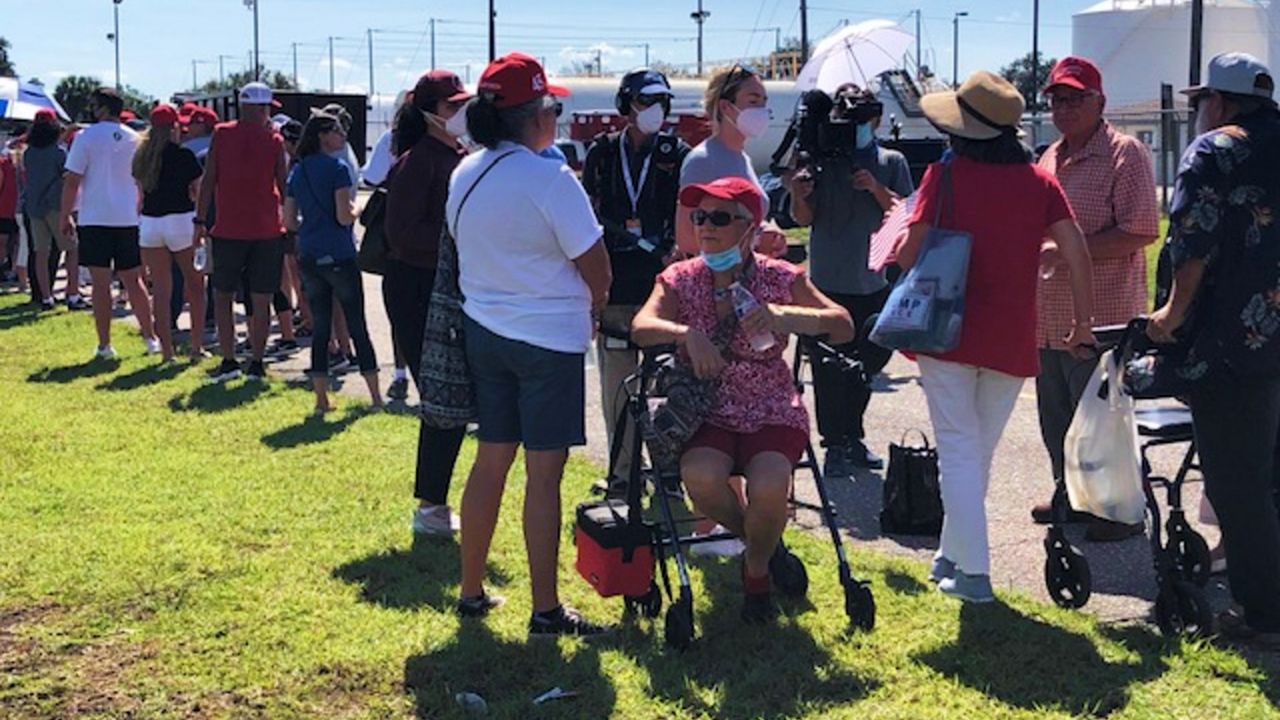 A section of the line to get into the Trump campaign rally in Sanford Monday. (Jeff Allen, Spectrum News)

“A great day to see the American president and see him in action,” he said.

Lastrapes was one of hundreds, if not thousands of people who gathered in line for several hours to get into the campaign event. Staffers and a few Trump supporters could be seen wearing masks, while most in attendance did not have masks on or, in Lastrapes’ case, they were around their neck.

“I’ll do what I have to do,” said Lastrapes. “If they require it I’ll do it, if they don’t I’ll take my own freedom and do it.”

FIRST RALLY BACK on the campaign trail - I checked with President Trump’s campaign and Seminole County Govt, health and law enforcement to see what they’re doing to make sure the rally with thousands of people in Sanford doesn’t lead to more virus cases. @MyNews13 pic.twitter.com/N1r5OiPEGD

A spokesperson for Orlando Sanford International Airport said because the campaign rally wasn’t their event, it’s up to the Trump campaign to enforce social-distancing and other measures to prevent the spread of the coronavirus.

“We take strong precautions for our campaign events,” said Courtney Parella, deputy national press secretary for the Trump campaign. “Every attendee has their temperature checked, is provided a mask they’re instructed to wear, and has access to plenty of hand sanitizer. We also have signs at our events instructing attendees to wear their masks.”

Trump supporter and former Sanford City Commissioner Mark McCarty says he’s not worried about catching the virus at the event.

“I don’t think it’s quite as serious as what it’s made out to be,” he said.

McCarty says he’s taken steps to make himself less vulnerable to the virus.

“I’ve lost 80 pounds and I don’t have things that cause me problems,” he said. “I’m not going to stand in front of someone sneezing, but yeah, I’m cautious.”

As for the president himself, the White House issued a statement from his doctors Monday afternoon saying the president had tested negative for the virus on "consecutive days."