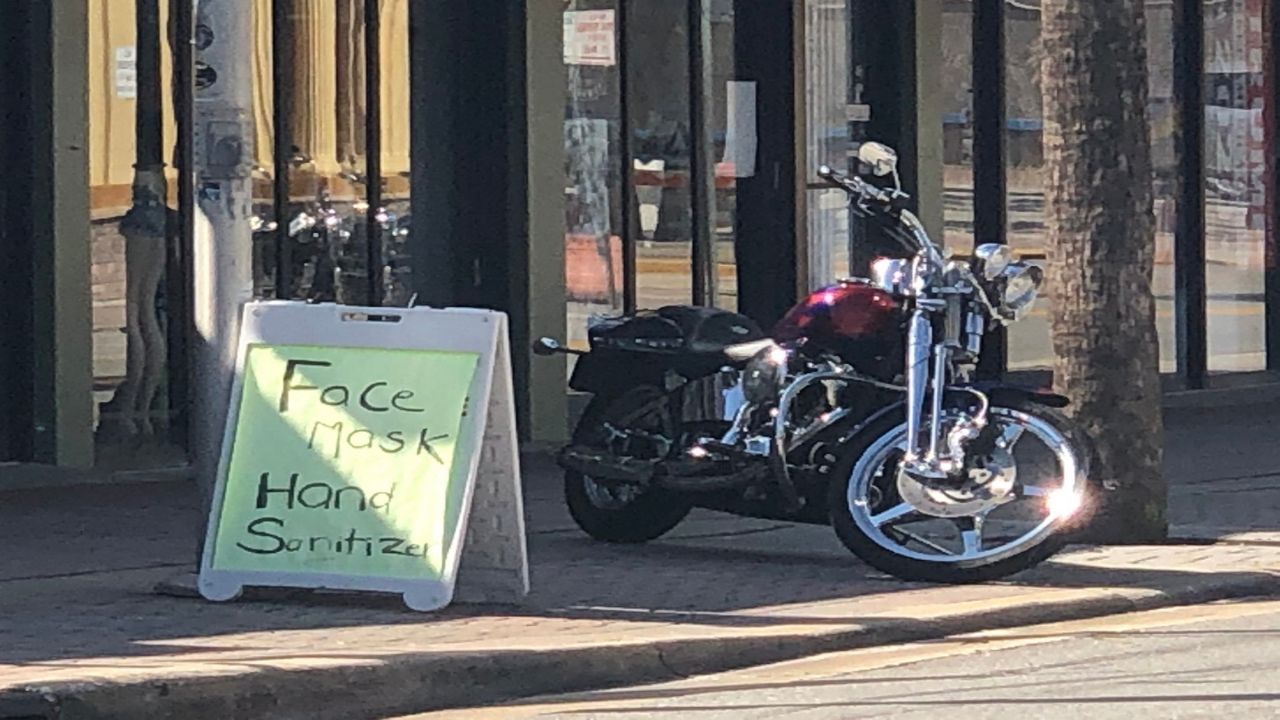 Daytona Beach is getting ready for Biketoberfest. (Nicole Griffin/Spectrum News 13)

DAYTONA BEACH, Fla. — Despite the ongoing coronavirus pandemic, tens of thousands of people are expected to roll into the "World's Most Famous Beach" for Biketoberfest as the annual tradition begins at Daytona Beach on Thursday.

Many came ahead of the official start of Biketoberfest, which is slated to look a little different this year due to COVID-19.

NO PERMITS - NO PROBLEM

Bikers are still rolling into Daytona Beach despite the city issuing no permits for the annual #Biketoberfest due to pandemic health concerns.

Daytona Beach city leaders did not approve any permits for Biketoberfest. While places like Ormond Beach and New Smyrna Beach did approve permits, the city of Daytona Beach did not due to the ongoing pandemic.

City leaders felt like it was just too much of a public health risk.

That means there will not be the usual tents and outdoor bars and music like in the past.

But bikers can still come and businesses can still fill to full capacity because of Florida fully loosening any restrictions that were in place on bars and restaurants.

The revving engines sound like music to the ears of Robert Burnetti, who is general manager of The Shores Resort and Spa.

“There is already bikes rolling into town, I am getting the feeling that it is still going to be a pretty busy weekend,” Burnetti said.

Despite no special events permits being issued in Daytona for this event, Burnetti is confident many will be coming regardless.

Last year he recalls they sold out. This year, he said they are about 40 percent away from that, but believes they’ll get there later in the week.  It is a far cry from where they were back in April, with only 10 percent of their rooms filled.

“People aren’t booking it as far out as they have in the past,” Burnetti said.

He believes another factor is confusion. While the city of Daytona Beach is not issuing permits for this event, New Smyrna Beach and Ormond Beach both are.

“It's part of the reason that we are maybe a little bit behind because people really don’t know what is happening,” said Burnetti, who says he has been fielding many questions by phone.

Permits or not, he believes nice weather will draw the bikers, especially now that bars and restaurants are fully open.

As for the Volusia County Health Department, they are recommending people mask up and stay apart.

Burnetti said they are going to do all they can to keep their visitors safe while they are inside the resort.

“I think everybody’s intentions are good but you can’t you know, as we have proven, you can’t control people’s behavior in all cases, so people have to make some decisions whether or not they are willing to take that step,” he said.

Without permits, there will be no extra outside bars and stages in Daytona Beach. However, bar and restaurant owners will still be allowed to fill their businesses up to full capacity. There will also be no fines issued for not wearing a mask, per the governor’s order.