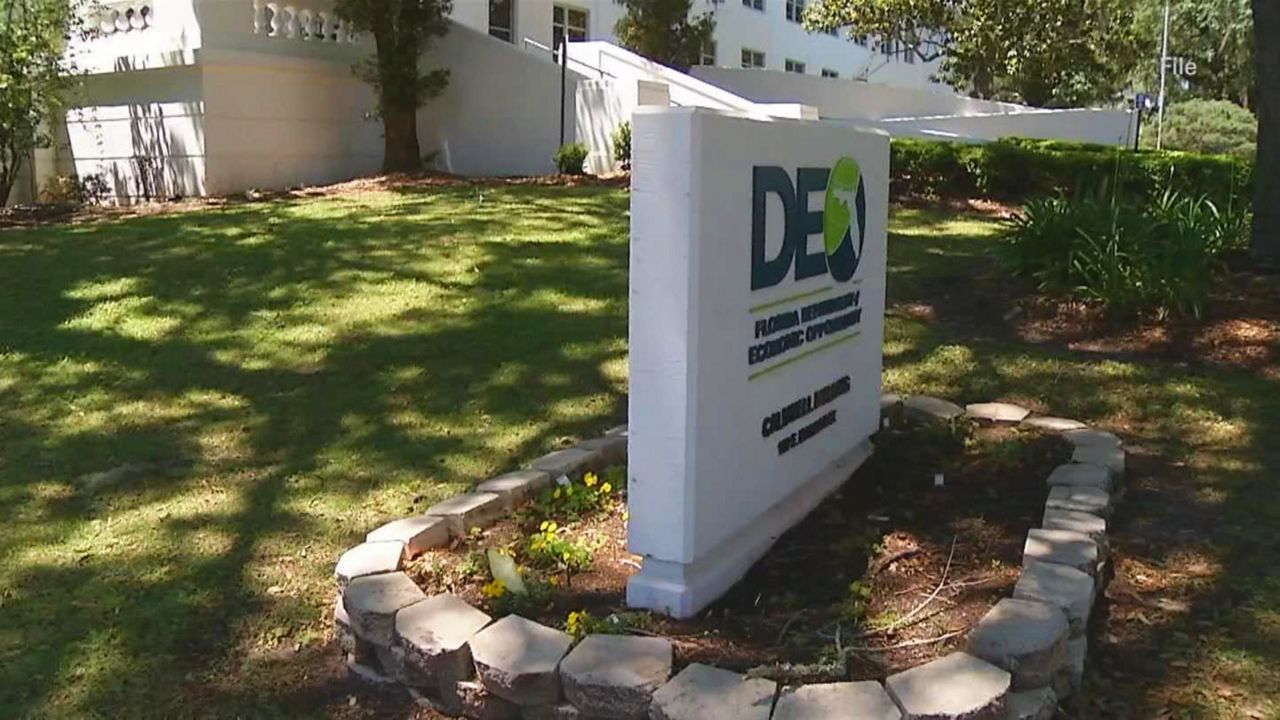 ORLANDO, Fla. — Six months after Gov. Ron DeSantis first ordered businesses statewide to shut down due to the global pandemic, many are complaining the state is still failing to provide full unemployment benefits as owed.

Matthew Egizio was furloughed from his bartending job the day the governor’s order took effect in March.

“Boom, the 15th happened and that was it,” Egizio said.

Since then, he like others, say they have been in a nonstop battle with Florida Department of Economic Opportunity to receive benefits they’re entitled to.

FILING FAILURES: It's been six months and some frustrated Floridians say they're still waiting to be paid unemployment benefits in full.

For months, many have expressed trouble navigating the confusing system, not being able to get through to call center agents, and a myriad of other issues.

Egizio has received some payments, but says he is still waiting for his claim to be “backdated”.

At one point, with many having trouble filing claims, Florida Department of Economic Opportunity encouraged people to file multiple applications. That seemed to help.

However in the cases of those like Egizio, their claims do not accurately reflect the date they were furloughed. That date adjustment or “backdating” is what they’re waiting on.

“I spoke to at least four people at DEO, like actual live people, and they said, ‘Oh, we’ll have it cleared up by the end of the week, you’ll have your weeks in your inbox,'” Egizio said. “Never saw it, never happened.”

Months later, Egizio says he is still waiting for about six weeks’ worth of unpaid benefits totaling approximately $4,500.

“They’re not fixing the issues that people are still having,” said Chris Lambert, a furloughed Orlando-area hotel worker.

Lambert, like Egizio and others, is also waiting for his claim to be backdated.

The delay, Lambert estimates, is costing him more than $4,000, which could be used to help pay off mounting debt and piling bills.

“It would definitely help paying off debts I’ve accumulated," he said. "For finances you need a credit card because you’re not getting payments during the pandemic, so it would help making sure paying car payments, paying utilities, paying everything to make sure the lights are on."

Florida Department of Economic Opportunity told Spectrum News in a statement that backdating is still a work in progress.

“Individuals who filed for state reemployment assistance may request to have their claim backdated if the Department prevented the individual from filing their application on a specific date. The claim can only be backdated to the Sunday immediate preceding the week in which the claimant first attempted to file their application. The claim cannot be backdated for reasons attributed to the claimant’s action(s). Each request to have a claim backdated must be reviewed and evaluated on a case-by-case basis. The claimant needs to provide the date they first attempted to file their application and the reason why they weren’t able to file on that date.”

A consistent complaint among those who reach out to Spectrum News is that applicants say they can’t get straight answers about issues with their claims.

Long pending adjudications and reviews, not being able to get through to call centers, and missing payments are among other common complaints.

Data from United States Department of Labor reveals delayed unemployment benefits did not start after the pandemic.

According to the U.S. Department of Labor’s “First Payment Promptness Standard”:

“… 87 percent of first payments must be made by states within 14 to 21 days after the week ending date of the first compensable week in the benefit year.”

In other words, it is expected that states distribute at least 87 percent of first unemployment checks within 14 to 21 days.

I also found U.S. DOL data that shows DEO failed to meet standard threshold for getting out first unemployment checks -- before the pandemic. @MyNews13 @BN9 pic.twitter.com/KVvbjp5zsj

Data from U.S. Department of Labor shows Florida failed to meet that 87 percent threshold even before the pandemic.

When asked about why the state is failing to meet the standard, a spokesperson for Florida Department of Economic Opportunity told Spectrum News the agency is focused on processing claims.

“The Department’s No. 1 priority is to get eligible Floridians paid as quickly as possible,” the DEO spokesperson said in a statement.

A U.S. DOL Spokesperson told Spectrum News that states “that fail to meet performance standards are required to develop corrective actions with milestones and timelines as part of the state’s State Quality Service Plan.”

Neither DEO nor U.S. DOL have specifically answered whether Florida has produced any corrective actions or plans.

U.S. DOL’s Office of Inspector General also could not provide any insight, nor confirm or deny if it is investigating failures of the state’s unemployment system, as requested by U.S. Senators Chuck Schumer, D-New York, and Ron Wyden, D-Oregon.

In making progress, DEO told Spectrum News in various statements that it has paid “… 99.9 percent of all eligible benefits requested prior to August 21, 2020.”

FL DEO says it's paid out more than $16 billion in state and federal benefits. Says they've paid 99.9% of eligible claims requested prior to August 21.

Their own data shows 154K+ Floridians are still waiting to be paid. pic.twitter.com/8mwPnZTE9r

As of September 18, DEO said it has paid out more than $16 billion in state and federal benefits, but even their own data shows more than 152,000 Floridians are waiting to be paid.

It’s also not clear how many Floridians have been paid 100 percent in full, as some say the agency’s data points do not line up with their experience.

“I don’t believe it at all,” Egizio said. “It makes you feel worthless, it gives you that hopeless mentality like it’s never going to happen.”

Frustrated and running tired of trying to make ends meet, those like Egizio say it is long overdue for DEO to fix the problems that remain.

Families are facing added pressure as furloughs and layoffs are extending beyond allowance of unemployment benefits. Temporary federal funding is helping to support the state’s unemployment program which is typically just 12 weeks.

On Friday, Swan and Dolphin hotels at Walt Disney World announced they were permanently laying off more than 1,100 workers.

The hotels are located on Disney property but not owned by Walt Disney World, which has also not confirmed how many of their 70,000-plus workers remain furloughed.

SeaWorld recently confirmed it would lay off 1,900 employees, while as Universal Orlando Resort told the state it was extending the furloughs of more than 5,400 workers.

While state's overall unemployment rate drops to 7.4% - Central Florida is not faring as well.

Extending furloughs and layoffs are growing.

Thousands in the past few weeks have been told they soon won't have jobs. pic.twitter.com/j8IfqBE81P

Osceola (15 percent) and Orange (11.6 percent) counties continue to rank at the top of the state’s unemployment rates.