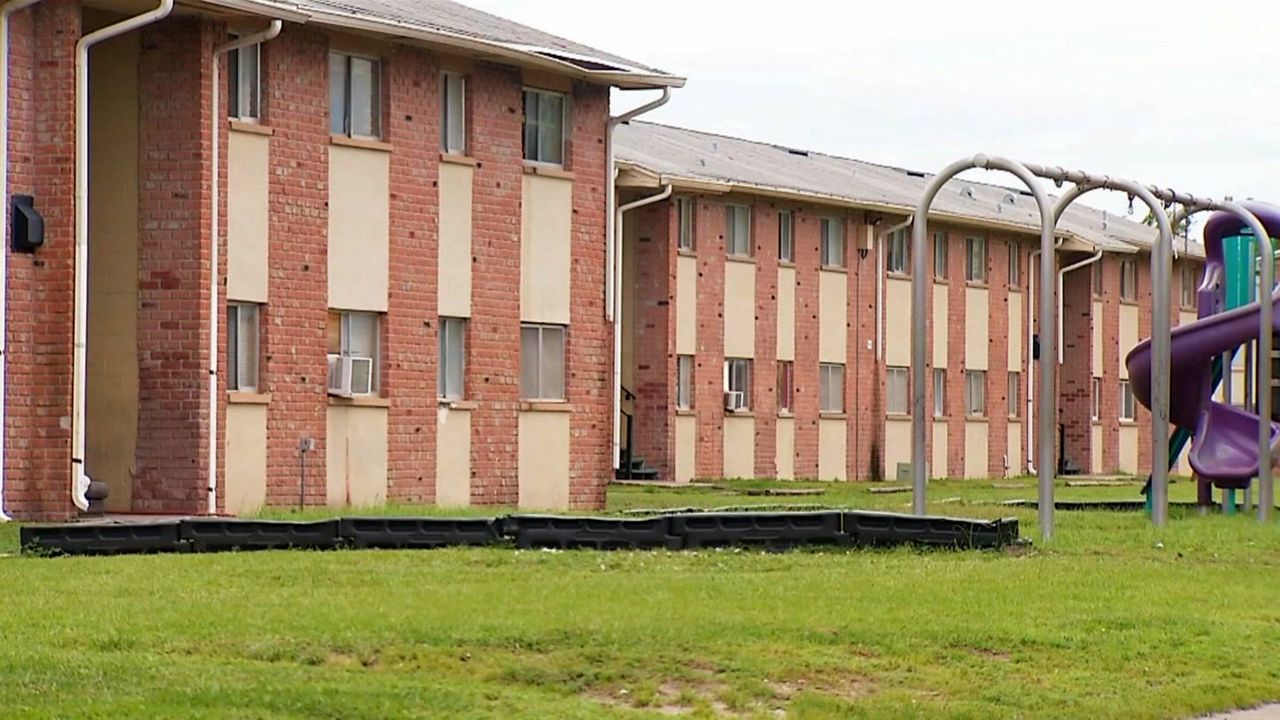 Broken windows are just some of the outward issues at Windsor Cove, which will soon get cleaned up with a new management company. (Spectrum News)

ORLANDO, Fla. — For decades, the Windsor Cove apartment complex on the Mercy Drive corridor in Pine Hills — soon to be known as Jernigan Gardens — has been seen as a place of neglect and, at times, outright danger.

Nineteen years ago, when Pastor William Andrews arrived in the area, the complex was called The Palms.

“Mercy Drive was called Murder Drive,” Andrews said, sitting in the sanctuary of Heart of Mercy Community Church of the Nazarene across the street from Windsor Cove.

Since that time, Andrews said violence at the complex has seemed to diminish, at least somewhat.

“The violence, when it erupts, it’s short-lived,” Andrews said. “It's blazing. But it's not that continuous violence like when I first came here.”

Orlando Police Captain Rich Lane, who patrols the area, characterizes the violence in a similar way. Rather than attributing an overtly upward or downward trend in crime rates, “I would describe it more as a rollercoaster,” he said.

From the start of this year through August 19, there were 22 shootings at Windsor Cove, according to OPD data. That’s compared to only seven shootings during the same timeframe in 2019.

“The vast majority (of individuals), you never even hear any problems from. But it doesn’t take many,” Lane said.

Shaina Connelly, 33, who lives at Windsor Cove with her son, said she wouldn’t recommend anyone live at the complex, due to “the lack of care and empathy” from management, as well as the violence.

Over the years, the HUD-assisted complex has been bought and sold by a number of different housing developers. But according to residents and community leaders, none of them have been able to affect any significant change.

Now, Lane thinks that with the Millenia Companies’ recent acquisition of the property and plan to rebrand it as Jernigan Gardens, that is finally going to change.

“I truly believe that this is going to be the first time it's going to make a huge difference,” he said.

Tom Mignogna is a senior tax credit developer with Millenia’s housing development branch. He worked for the last four years to secure the acquisition of Windsor Cove, he said.

“The important thing is, I don’t think this property has really received the level of maintenance and upgrade for over 30 years,” Mignogna said. “That is just not acceptable for the residents.”

The Department of Housing and Urban Development inspects and rates the physical condition of the multifamily properties it assists. Windsor Cove’s last documented HUD inspection was in September 2018, when it received a score of 31 out of 100 possible points.

Inspection data also indicates that at least one life-threatening health and safety deficiency was noted during the property’s three most recent inspections, going back to April 2016.

Planned upgrades include major interior renovations for all 256 units, as well as exterior improvements to the grounds.

None of the existing units will be removed and no residential buildings will be demolished, so no one will be displaced, Mignogna said. The idea is to rehabilitate the existing buildings significantly, with new kitchens, lighting fixtures, HVAC systems and other updates.

Outside, Mignogna said new irrigation systems, windows, roof shingles and lighting will improve the property’s overall aesthetic. The lighting will be an important element to enhancing safety on the property, along with new security cameras that will be fed directly to the OPD’s surveillance system.

Construction onsite has already begun, and renovations are scheduled to be complete by the spring of 2022.

“It's been a long time coming, and it's gonna be worth the wait,” Mignogna said.

Besides physical restorations, another major challenge at Windsor Cove will be increasing levels of trust between residents and the police officers who patrol the area.

“There's no relationship between the residents and the officers that patrol,” said Connelly, who said she’s lived at the complex for the last eight or nine years.

“We see police around, but they’re only here to do their job — to arrest,” Connelly said. “I won’t say protect and serve, I’ll say arrest.”

A police substation building sits directly behind the leasing office at the front of the property, but it’s been unused for some time.

Both buildings are the only two that will be demolished during the renovation project. One large community center, which will include a fitness room and a computer lab, will replace the two smaller buildings.

Lane thinks that the new community center will help with the social initiatives the police department plans to enact in order to enhance relationships with residents — particularly, young residents.

Lane mentioned kickball tournaments and ice cream trucks as just a couple of the activity ideas Orlando police want to bring to youth at the apartment complex.

Large gatherings are currently on hold due to the COVID-19 pandemic, but as soon as the state and country start to open back up, those will begin, hesaid.

In the meantime, Lane said officers have already started going door-to-door to meet residents at the complex, introducing themselves and letting them know about the changes soon to come.

He acknowledged that establishing residents’ trust will require consistency from officers, and it won’t happen overnight.

“You have to be in there all the time, you have to know them on a first-name basis,” Lane said. “That's what we’re building throughout the complex.” 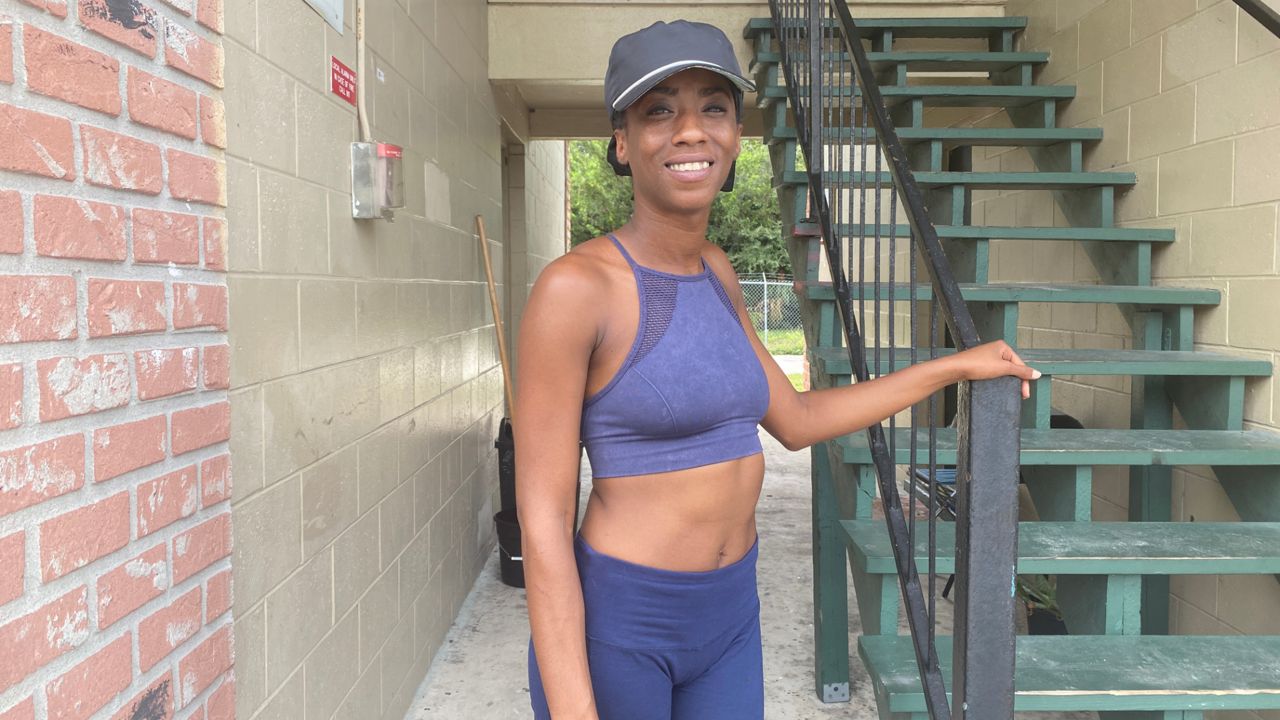 Shaina Connelly stands outside the Windsor Cove apartment complex in Pine Hills, where she has lived for at least 8 years. (Molly Duerig, Spectrum News)

Connelly said she’s been looking for a new place to live. But she still cares about the people who live at Windsor Cove/Jernigan Gardens, and believes they deserve much better than what they’ve been given.

“People out here are written off, sadly so,” she said. “I think people need to know that there's actually good people that live here.”

She described the feeling of coming through the property gates as “very depressing.”

“I just think there have to be more resources poured into this community, for people to look outside of this community and see a future for themselves,” Connelly said.

The purpose of affordable housing, Mignogna said, should be just that: a temporary stepping stone for people who need some extra help.

It should be a stop on someone’s journey, not a final destination, he said.

“We don't want people to necessarily come and stay,” Mignogna said. “We want them to come, feel comfortable, be able to grow and heal from whatever landed them in public assistance housing. Get on their feet, and be able to move onto their next stage in life.”

For Connelly, the message to community leaders is simple.

Molly Duerig contributed to this report. Duerig is a Report for America corps member who is covering affordable housing for Spectrum News 13. Report for America is a nonprofit national service program that places journalists in local newsrooms to report on undercovered issues.