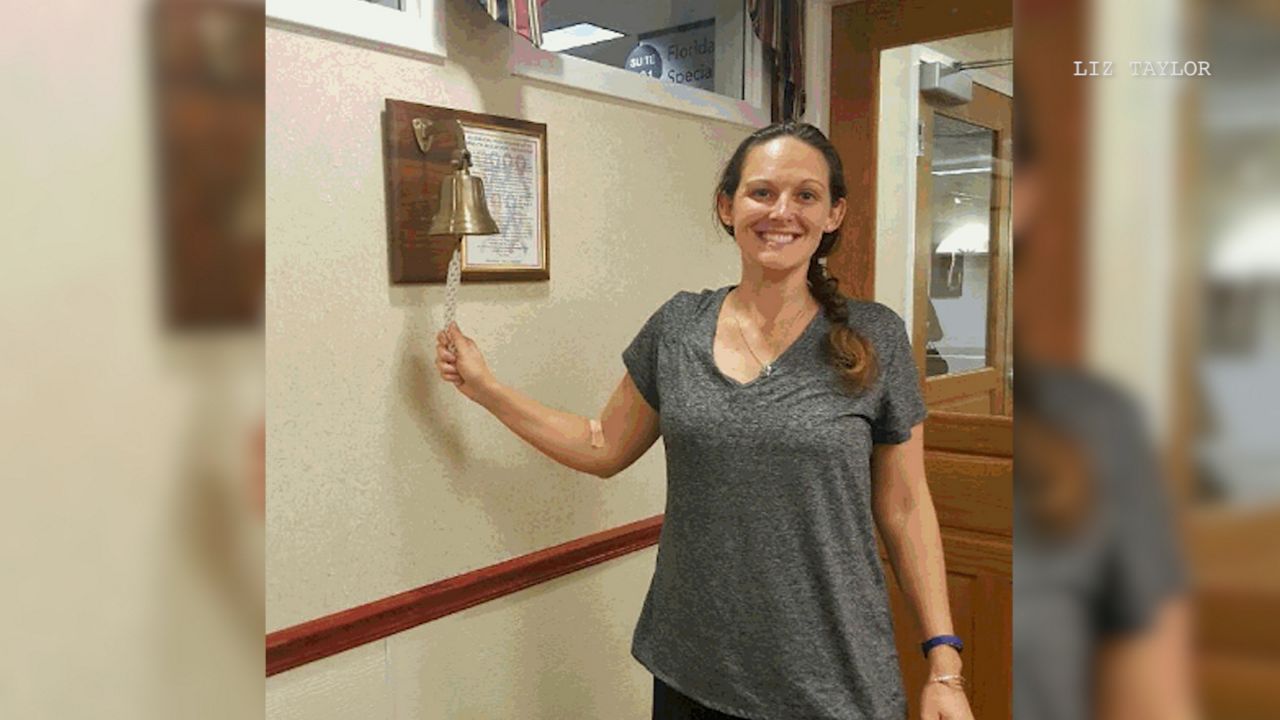 Liz Taylor of Melbourne has been free of colon cancer for 4 years. She was diagnosed with stage 3 colon cancer at just 34 years old after years of symptoms. (Courtesy of Liz Taylor)

MELBOURNE, Fla. — The death of 43-year-old actor Chadwick Boseman over the weekend after a years-long battle with colon cancer came as a shock for many fans. His portrayal of legendary roles from Jackie Robinson to the iconic T’Challa in Black Panther inspired many around the world.

At just 34 years old and while training for a half-marathon, Liz Taylor was diagnosed with stage 3 colon cancer in 2016. Symptoms came on slowly at first, and for a long time, she was able to brush them off.

“I had symptoms for seven years before I had my official diagnosis,” said Taylor, who lives in Melbourne. “I was first experiencing symptoms at 27 and had mentioned it to my doctor kind of off the cuff and said, 'Hey, I have some blood in my stool,' and (I) might not have been 100 percent honest when he asked how frequently because it’s embarrassing."

At that point, the eventual diagnosis of colon cancer wasn't as shocking to her, "because I ignored it for so long," she said. "I pretty much knew I had it when I was diagnosed. I think my husband was more shocked. We had a 3- and 5-year-old home at the time. So it was very shocking I think for my family," she said.

After eight months of intensive treatment, she was able to beat colon cancer and has stayed cancer-free now for more than four years.

"It was hard to see that, like wow, that could be me. Thankfully, it’s been four years for me, next year it will be five, and I’m looking forward to that five-year mark. But, you know, it’s unfortunate,” Taylor said. “I was diagnosed the same year that Chadwick was diagnosed and I had the same stage he was, so when I heard that this weekend, I just thought oh my gosh."

Colorectal cancers are common and often serious. They’re the second-highest cause of cancer-related deaths of men and women combined in the U.S.

Rates are dropping in those 65 and older but rising among young people. Data from the American Cancer Society said that in 2020, 12 percent of colorectal cancer cases will be diagnosed in people under the age of 50.

“As far as why? There’s a lot factors. Our increasing awareness and screening measures in families at-risk is one factor. Another is diet, certainly, and others we’re working to understand better,” said Dr. Sanjay Reddy, Digestive Disease Consultants partner and gastroenterologist. Reddy also serves as the Orlando board chair for the American Cancer Society's volunteer leadership council.

Catching colorectal cancers at early stages save lives. During the pandemic, routine cancer screenings have dropped, but Reddy said they don’t have to.

And beyond annual screenings, Reddy said it's important for people and family members to be cognizant of certain warning signs that could be indicative of something more serious.

"I think the message that we will often share is watching out for alarm signs. And I think that is the other side of the coin compared to screenings, so someone might have a change in their normal bowel routine at any age. Patients might see blood in their stool, patients might lose weight unexpectedly or have discomfort whereas usually they wouldn't have to think about their diet or their bowel habits," Reddy said.

Those screenings and tests are important, Taylor said, and they helped save her life.

“If you ever have any symptoms, definitely go get treated or go get looked at,” Taylor said.

The American Cancer Society recommends screenings at the age of 45 for colorectal cancers. If you have any kind of symptoms or signs that are concerning, it’s important to reach out to your doctor.