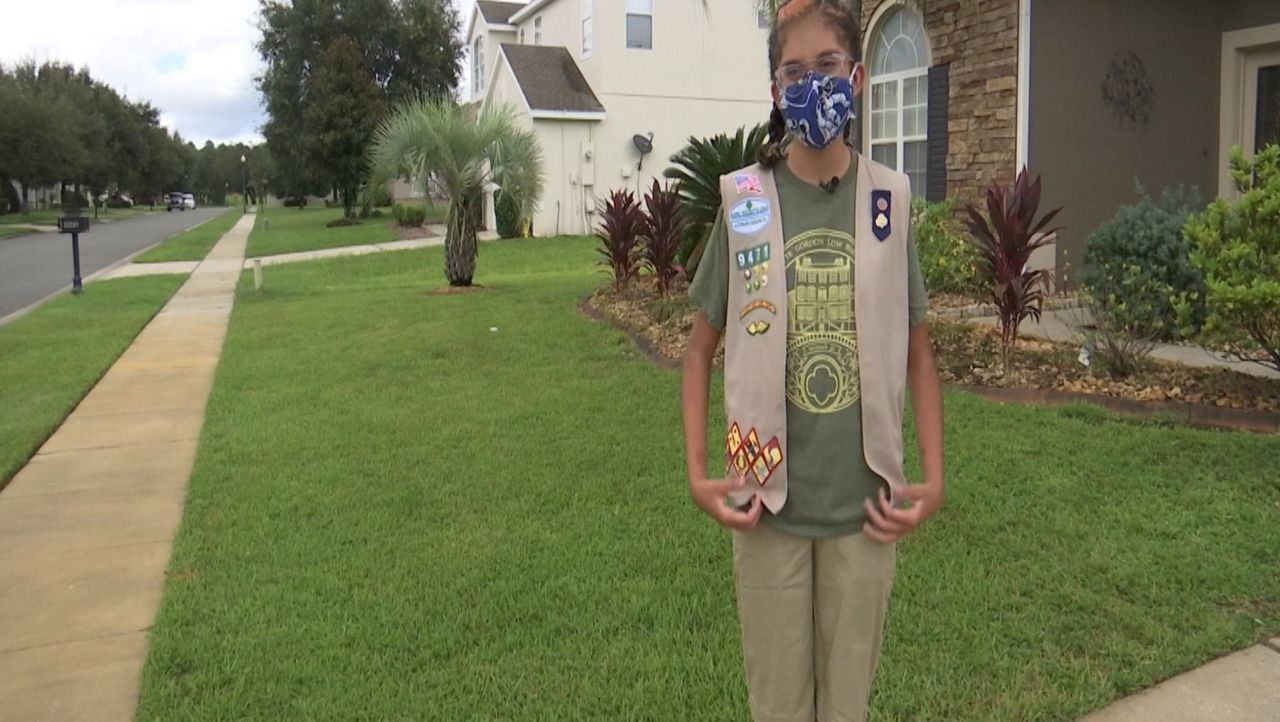 Anna Tews, a Girl Scout in Lake County, says she knows what project she plans to enter in the contest. (Rachael Krause/Spectrum News)

Contest Shoots to Get Girls' Focus on Stars, Science

LAKE COUNTY, Fla. — With the Space Coast right here in Central Florida's backyard, some children growing up in the Sunshine State dream of growing up to be an astronaut or working in space fields.

Now, a collaboration between the nonprofit group Space Kids Global and the Girl Scouts is giving girls a chance to create ideas that could be sent up into space next year. The groups are hopeful it will inspire young girls to dream big, too, when it comes to careers in science, technology, engineering, and mathematics fields.


“I think it’s very important that girls know that space exploration and technology is for everyone,” Sharon Hagle, chief executive officer and founder of Space Kids Global, said.

As one way to try to help that along, Space Kids Global and the Girls Scouts created a contest called “Making Space For Girls," giving the 2.5 million Girl Scouts from all across the United States the chance to send their ideas out of this world.

“And send you know, one or two or more, however many we can fit in a Faraday box, send their idea to space, to the ISS [International Space Station] seems to me to be an incredible way to engage and inspire the girls to take an interest in STEM and in space science in particular,” Girl Scouts of Citrus CEO Maryann Barry said.

As a future astronaut with Virgin Galactic and Space Kids Global founder, Hagle often works to get youths interested in STEM fields early in their lives.

“I just think it’s really cool that Girl Scouts is offering this for girls across the country, to really be able to get involved,” said Anna Tew, a Girl Scout in Lake County for the past nine years.

“Yeah, it’s definitely really cool because it really jumpstarts a girl’s interest into having a career in space in the future, and it really shows them that they are able to have a voice in what happens around them,” Tew said.

The winning project will be put on a SpaceX launch to the ISS to be studied, but they’re hoping the contest leaves an impact here on Earth by interesting girls in space and science fields, from being an astronaut to engineering and mechanics.

Tew is already dreaming of a career in science after school, possibly working in space or meteorology. She said members of her troop are excited to plan out their contest entries, and she's already got her idea ready to go.

“I personally am going to write an essay on what I think space and space travel is going to look like in the next 10 to 20 years,” Tew said.

The vast majority of astronauts to travel into space so far have been men, and many STEM fields still are male-dominated.

Hagle said she hopes to inspire young girls early on as she travels into space in the next few years and through projects like this contest. She said she wants to show them that if they put in the work in school, their careers can easily lift off, too.

“I just can’t wait to hear about their ideas,” Hagle said. “You know, the sky’s the limit.”

Added Barry, “Really getting girls’ attention that they can reach the stars.”

The Making Space For Girls contest is open to Girl Scouts all across the country. To enter, scout must create an entry in one of three designated categories: creating a design for the “Making Space for Girls” mission patch, by writing an essay on your space dreams and the future of space travel, or by proposing an idea for an experiment that can be sent up to the ISS that can fit in a Faraday box. More information on the program is available on the program's website.