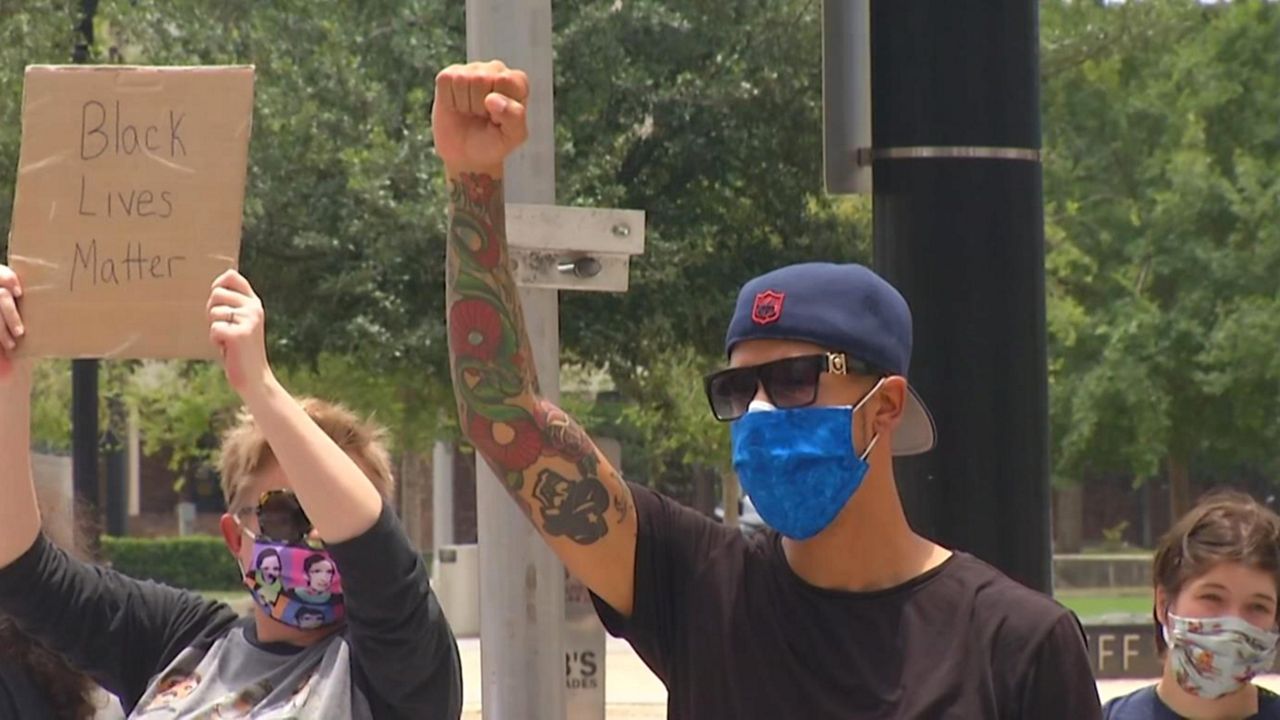 “I have a daughter, and do I want my daughter to be the next Breonna Taylor?” said Don Laurie, who demonstrated outside Orlando City Hall on Monday afternoon. (Spectrum News 13)

"We Are Scared for Our Lives": Orlando Demonstrators Call for Police Policy Changes

ORLANDO, Fla. — Despite threats of storms, a group of several dozen demonstrators stood guard outside Orlando City Hall on Monday, saying the time has long come to address what they see as racial injustices and inequality in policing.

The group gathered hours before officials in both Orange County and the city of Orlando lifted all curfews for their jurisdictions Monday afternoon.

“I have a daughter, and do I want my daughter to be the next Breonna Taylor?” said Don Laurie, a demonstrator outside city hall. “No, and that’s what we need to change, that’s what people need to understand: We are scared for our lives.”

Laurie said as a black man and father of a young daughter, he wants to change the fear instilled in many as it relates to police and law enforcement.

A Washington Post review found law enforcement officers shot and killed at least 1,041 people in the past year in the U.S., including at least 349 people in Florida.

Laurie said there is real fear that even a simple traffic stop can lead to death.

“He has a Taser, he has mace, let there be new protocols before police officers discharge their firearm. There has to be a different way. It cannot be, ‘I’m scared, shoot.’ That has to change,” Laurie said.

That is a crucial point to broad policy changes Laurie is petitioning for, in addition to increased training.

For its part, the Orange County Sheriff's Office just last week updated its use of force policy to specify that deputies have "a duty to intervene if they anticipate or observe the unreasonable, unnecessary or disproportionate use of force."

Laurie stopped short of shutting down law enforcement agencies, saying he would rather see departments rebuilt from the inside.

Central Florida law enforcement agencies say they have made strides in building relations between officers and communities.

“Community engagement is incredibly important to the Sheriff and the Sheriff’s Office,” the Orange County Sheriff’s Office told Spectrum News. The agency said it's hosted multiple community barbecues and planned other community-focused events, some of which have been canceled due to the coronavirus.

“We all look forward to the day where we can, once again, have our community events take place,” a spokesperson said. “For now, Sheriff Mina, and his entire team, will continue to have an open dialogue with members of our community.”

The Orange County Sheriff’s Office’s Citizens Advisory Committee will meet Tuesday. The Sheriff's Office said the group, comprised of citizens nominated by various county leaders, works to “…(1) provide a public forum for constructive dialogue between citizens and law enforcement; and (2) to study relevant policies and procedures and provide recommendations, if any, for positive change.”

Mina, along with various city leaders, including Orlando Police Chief Orlando Rolon and Mayor Buddy Dyer, have been among those meeting with demonstrators and participating in walks.

Laurie said he and others are committed to continue to turn out every day until they see what they believe are meaningful changes to policing in Central Florida.