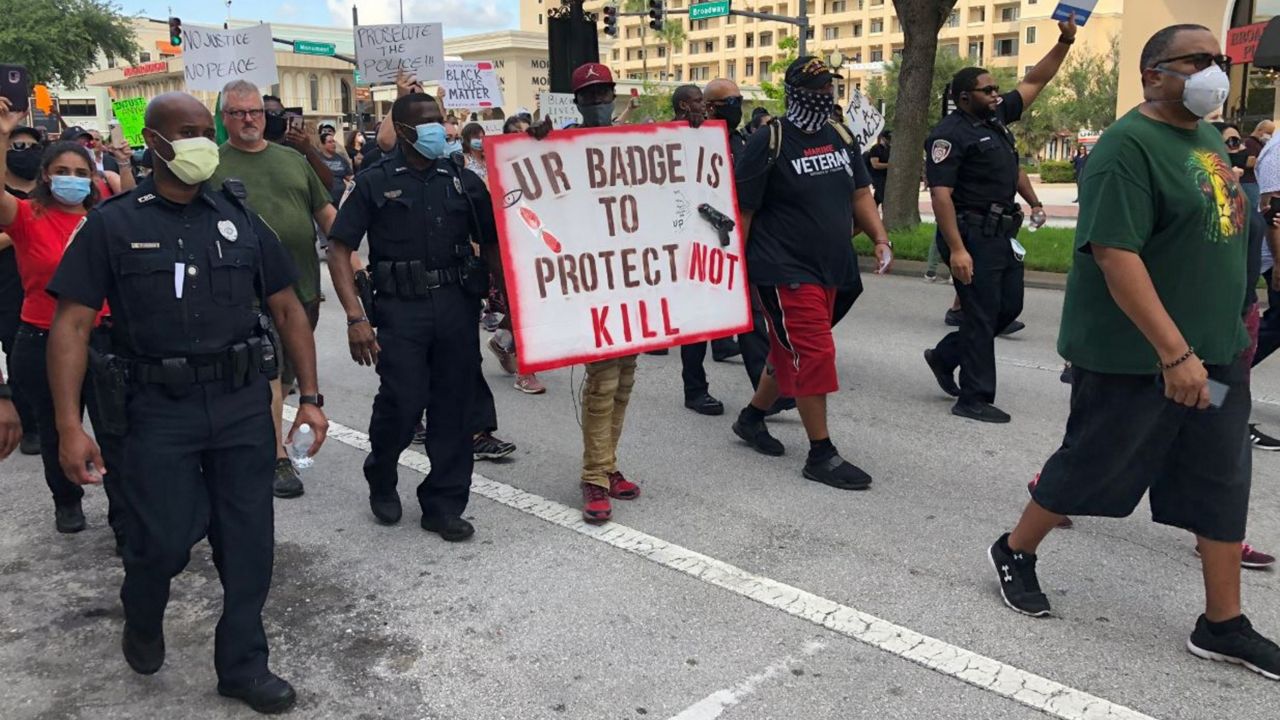 Hundreds marched through Kissimmee’s downtown streets on Monday. But instead of squaring off against police, they marched alongside Kissimmee police officers and other Osceola County law enforcement. (Eric Mock/Spectrum News 13)

KISSIMMEE, Fla. — Law enforcement marched side-by-side with protesters in Kissimmee on Monday. For the demonstrators, it may not have been their own family, but to many of the hundreds of Osceola County protesters, George Floyd’s death was personal.

Especially for Alan Middleton, who says his father was killed by police when he was just a child.

It is even personal for his younger relatives like 12-year-old Noemi Hill.

She described how she felt after seeing the new clips of a white officer kneeling on George Floyd’s neck.

“It scares me, and I cried one night for a long time, and it scares me because I have two brothers and a father and God forbid they get stopped by a police officer, and I don’t know,” Hill said.

The hurt so personal for them and many others, they wanted to make it known.

Hundreds marched through Kissimmee’s downtown streets on Monday. But instead of squaring off against police, they marched alongside Kissimmee police officers and other Osceola County law enforcement.

Protestors didn’t face off with police, but marched side by side with them in Kissimmee, FL today. All marching to condemn police brutality against black and brown people and to demand justice for #GeorgeFloyd @MyNews13 pic.twitter.com/vZnyLm1Z7D

“And that’s why we’ve inserted ourselves, kind of another effort to say, ‘Let’s do it the right way,’ and let’s let Kissimmee be the example of what everybody else should do when addressing these issues,” O'Dell said.

But officers were ready in case things got out of hand. Some downtown business owners boarded up out of fear of looters.

But this protest ended without anything getting damaged or anyone getting hurt.

However there is still a lot of work to be done to assure children like Hill that she or her relatives will not be wrongfully killed by police.

O’Dell also discussed how his department is now using a peer intervention program, where officers are trained to intervene if they see a fellow officer being too aggressive or acting inappropriately.

Many protesters are calling for charges to be brought against the other white police officers who were arresting Floyd for not stopping their fellow officer when he was kneeling on his neck.

Protests and riots have broken out all over the country since Floyd’s death. The black man pleaded for air after a white police officer, Derek Chauvin, had his knee on Floyd's throat during an arrest in Minneapolis.

Chauvin and three other officers were fired, and Chauvin has been charged with murder.

In Orlando, a “Justice for George Peaceful Protest” is scheduled for Tuesday at 3 p.m. that will take place in front of Orlando’s city hall.

The purpose is for people to demand justice for Floyd and demand change, according to a release from the organizers of the protest.