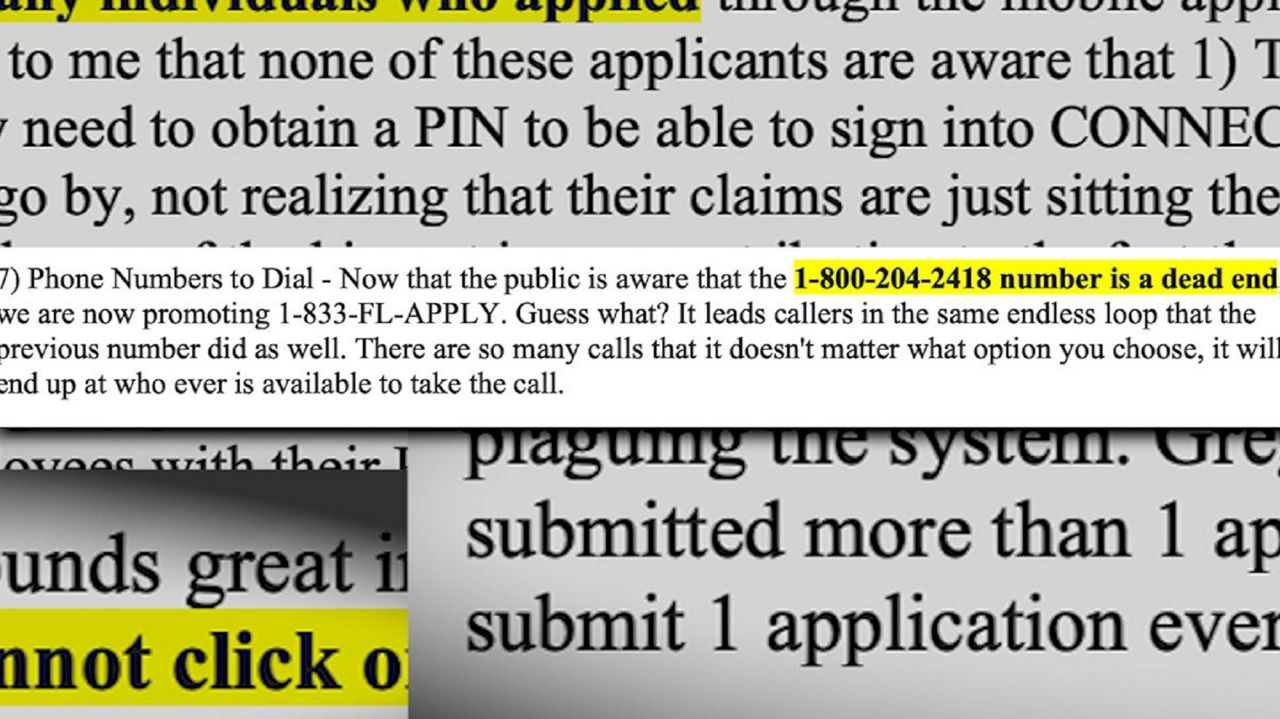 ORLANDO, Fla. — More Floridians are growing frustrated with the state’s problem-plagued unemployment system. So are the call center agents hired to help people apply for benefits.

“You can honestly hear the desperation in their voice as soon as we answer,” said “Oliver”.

“Oliver,” whose real name we are not disclosing for their protection, worked as an out-of-state call center representative up until last week, when he says DEO directed its contractors to fire an unknown number of hundreds of non-Florida-based call center agents hired for processing calls and applications.

"Oliver" and other call center agents say the agency forced them to stick strictly to a script. Despite having some access to applications, agents couldn't take action. @MyNews13 @BN9 pic.twitter.com/Q1rGzsEKS6

“We could see a lot of information in their claims, but for some reason we were instructed we couldn’t go over any of the information or what it says, with them,” Oliver said.

Spectrum News spoke with nearly a dozen call center agents who still work or previously worked for DEO directly, or for one of the three contracted companies.

Agents have provided Spectrum News with a rundown of troubles seen from the inside, including:

Agents say they are told to strictly stick to a script provided by DEO, instructing them how to answer various questions. Frustrations on the inside single out DEO for not giving them the answers or resources to solve problems for applicants.

Multiple agents describe one "glitch" as the "grey button" problem.

They say coding blocked applications from being submitted. They found a fix. But, they say, they were threatened to be fired if they did this.@MyNews13 @BN9 pic.twitter.com/DEbL4v3n7b

Creating applications is yet another problem, agents say, pointing to what’s being dubbed as the “grey button” problem.

“In the middle of the application we saw a greyed-out submit button that would not let us go to the next page to finish the application,” Oliver said.

Unable to finish the application, Oliver said, the best they could often do is instruct people to try again later or fill out a paper application.

That is, until agents say they discovered a fix within the coding index of CONNECT.

A video provided to Spectrum News reportedly shows a call center agent walking through the steps of accessing the site’s coding infrastructure and finding the “submit tab” coded as “disabled”.

“Coding was automatically set to disable, so we had to go in and delete that coding or change to ‘enable’ to go on and load the next page, and it wasn’t just one page, it was several we had to do this,” Oliver said.

Bringing the issue and bypass solution to supervisors, Oliver said, was met with threats of termination if they used this process.

“We started caring more about callers than job security because we were getting calls every day with people threatening themselves or someone else if they lost their home, they weren’t able to pay their bills,” Oliver said. “I had one lady ask me ‘what am I supposed to tell my kids when they’re asking me what’s for dinner'.”

Agents say the emotional toll is mounting, not just for the unemployment, but those struggling to help.

"Oliver" says many call agents are breaking down emotionally.

The failures of Florida's unemployment system are hurting not just those families in need, but those hired to help.@MyNews13 @BN9 pic.twitter.com/CieVjL8EkS

“My co-workers are starting to feel it,” another call center agent told Spectrum News. “They are angry with management because we are not being given the tools to succeed. They are angry with callers, because we are verbally abused and threatened every five minutes. Many callers cry, some yell. Some state they are broke, others that they have no food. Some callers threatened that they will commit suicide, others threaten they will kill us (literally, come down to the location and shoot us). It is absolutely pandemonium.”

Spectrum News has spoken to many applicants who express they are beyond their breaking point. Many have spent more than two months without any status change in their application and have yet to receive any benefits.

“There was a woman yesterday who posted on Facebook that she walked into oncoming traffic hoping a truck would hit her and she said the cars veered away,” said Florida State Sen. Jason Pizzo (D-District 38) of Miami-Dade County. “We are the third largest state in the wealthiest nation, this is unacceptable.”

Exhausted with calls and emails, Pizzo is among lawmakers who have tried taking the issue straight to Tallahassee.

Florida's Problem-Plagued Unemployment System is pushing many to threaten to harm themselves or others.

It is a heart breaking reality. I am getting those messages. So are lawmakers like @SenPizzo @MyNews13 @BN9

“We figured getting in people’s faces would be a lot more effective than writing letters and trying to make phone calls and do what everybody else is doing,” Pizzo said.

“We came up here April 21 after attempting to reach and connect with DEO and pledged ourselves to actively participate with filers and applications; they (DEO) said thank you, but no thank you,” Pizzo said.

Stewart told Spectrum News at the conclusion of the hour-long meeting she feels “there is still too much to be done.”

Efforts among lawmakers to call for a special session to address, in part, the unemployment troubles recently failed by a vote along party lines. DeSantis has also not said whether he would consider extending the state’s 12 weeks of unemployment benefits, which for some are nearing an end.

Florida Department of Economic Opportunity has yet to respond to Spectrum News’ repeated requests for comment on a list of questions, including those related to call center issues.