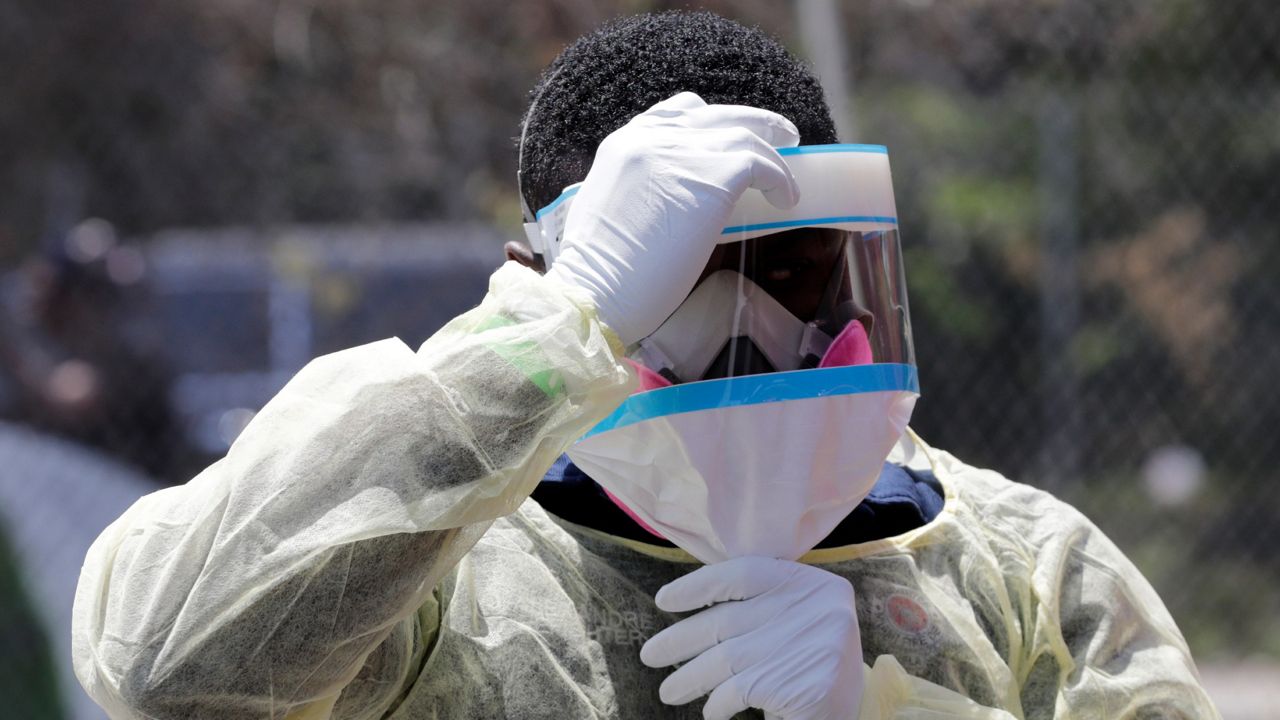 Florida is second only behind New York in the number of coronavirus tests that have been conducted. More than 100,000 Floridians have been tested. (AP photo)

STATEWIDE — Florida's total deaths as a result of coronavirus have passed 200 as the numbers released Sunday show more than 12,000 toal cases in the state.

And as Florida cases continue to grow, more people in the state are turning to places to be tested.

In fact, Florida is second only behind New York in the number of coronavirus tests that have been conducted. More than 100,000 Floridians have been tested.

Central Florida’s largest testing sites is bringing in people from around the region to Orlando as they head to the Orange County Convention Center to be swabbed for coronavirus.

They’ve been testing for coronavirus at this site for a week and a half now. This is one of several testing sites around the state and they can do hundreds every day here.

A federal mandate allows for testing of up to 250 people every day here at the convention center. Since opening, more than 2,000 people have been tested here.

Still, convention center testing is hitting maximum capacity within just a few hours, sometimes minutes in recent days after they expanded testing to all ages.

Akelah Shaw is a registered nurse here at the convention center, she says she’s seeing people coming in that are scared, often sick.

“It’s unfortunate that we have to cap out but it’s what needs to be done," Shaw said. "And we’re just going to keep going until we reach our max."

More sites are expected to open soon around Central Florida.

A new coronavirus testing site is opening up Monday morning on the campus of the University of Central Florida. It'll be Orange County's second drive-thru testing site.

Cones are already blocking off the road leading into UCF's Garage A at the corner of University and Gemini, where the new testing site will be. The site is operating in partnership with UCF and Aventus Biolabs.

Aventus Biolabs is a private genetics testing lab owned by Aventus Health, a healthcare company with an Orlando headquarters.​

"The majority of the testing done in Florida has been done by commercial labs when you look at the breakdown of numbers. The commercial sector has played in an important role in expanding Florida's testing capabilities," Eskamani said.

Aventus can test about 250 people per day. After you're screened, you can get an appointment. Officials say each person will have a swab specifically for them.

"They are asking for calls first and appointments to be made, and they're following the CDC guidelines on who should get priority testing," Eskamani said.

"We're already connecting this commercial laboratory with the state to get more testing collection kits as well," Eskamani said.

​The appointment-only testing will be open weekdays 9 a.m. to 5 p.m.

Other testing sites in Florida

OMNI Healthcare in Melbourne had a soft opening of its drive-thru testing, which began Sunday.

The testing will be open for first responders, healthcare workers, and those who work at Publix or Winn Dixie. Testing will also be available for those with low-grade fever or cough as well as those over 45-years-old with chronic illnesses and those over 60-years-old.  Patients must e be pre-screened and pre-register by calling 321-802-5515.

The drive-thru will be fully operational starting on Tuesday at 8 a.m. until 6 p.m. daily for the nasopharyngeal swab collection at its OMNI's Melbourne facility.

According to OMNI Healthcare Chief Medical Officer Dr. Craig Deligdish, with more testing available, the numbers of cases reported will rise — but don't be alarmed.

Meanwhile, the Hillsborough County Emergency Management has secured 1,000 additional testing collection kits from the state and will resume testing at Raymond James Stadium through Wednesday, April 8. Click here for information on registering.

Also in the Tampa Bay area, public testing sites will continue at BayCare facilities in the St. Petersburg Carillon site, as well as at BayCare Haines City and at Gulf High School.

The U.S. warned of many more coronavirus deaths in the days ahead this weekend as the global pandemic continued to see the number of cases grow.

A chaotic scramble for desperately needed medical equipment and protective gear engulfed the United States, prompting intense squabbling between the states and federal government at a moment the nation is facing one of its gravest emergencies.

President Donald Trump warned Saturday that the country could be headed into its toughest weeks, but also said he’s eager to get it reopened and its stalled economy back on track.

“There will be a lot of death, unfortunately,” the American president said in a somber start to his daily briefing on the pandemic. “There will be death.”

The number of confirmed infections topped 1.2 million globally, and the death toll neared 65,000, according to a Johns Hopkins University tracker. The virus causes mild to moderate symptoms such as fever and cough in most patients, who recover within a few weeks. For some, especially older adults and people with existing health problems, it can cause more severe illness such as pneumonia and death.

The number of people infected in the U.S. has soared to more than 300,000 as the fatalities climbed past 8,400. Many of the victims are in New York City, but the outbreak is deepening elsewhere too. More than 400 people have died in Louisiana, where state authorities have been sprinting to find ventilators. Michigan has more than 14,000 infections and 500 deaths, mainly in Detroit.

Two Florida law enforcement officers have died from coronavirus as the number of positive cases in the state topped 11,500, officials said Saturday.

The Palm Beach County Sheriff’s Office said Sgt. Jose Diaz Ayala, 38, died Saturday. He had underlying health issues, the department said in a news release. He worked at the department for 14 years and was assigned to its corrections division.

The department didn’t release details about when or how Ayala contracted the disease.

Earlier Saturday, Broward County Sheriff Gregory Tony announced that Deputy Shannon Bennett, 39, had died from the disease. Bennett, who died Friday night, was a 12-year veteran of the agency.

The sheriff said Bennett had worked most recently as a resource officer at Deerfield Beach Elementary School. Bennett called in sick March 23, checked into the hospital that same day and tested positive for coronavirus March 27.