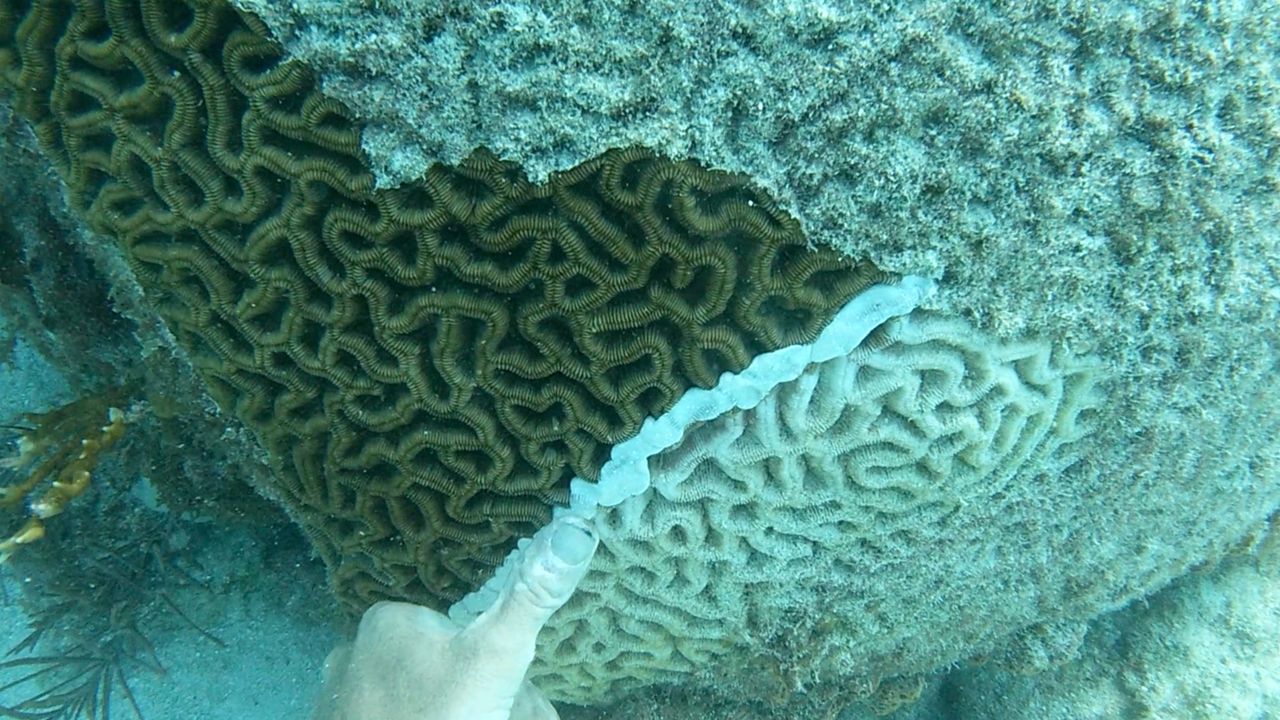 Research assistant Kevin Macaulay applies medical paste with amoxicillin to a coral infected by storny coral tissue loss disease, in an attempt to save the healthy tissue that remains. (Spectrum News)

1 of 6
Research assistant Kevin Macaulay applies medical paste with amoxicillin to a coral infected by storny coral tissue loss disease, in an attempt to save the healthy tissue that remains. (Spectrum News) 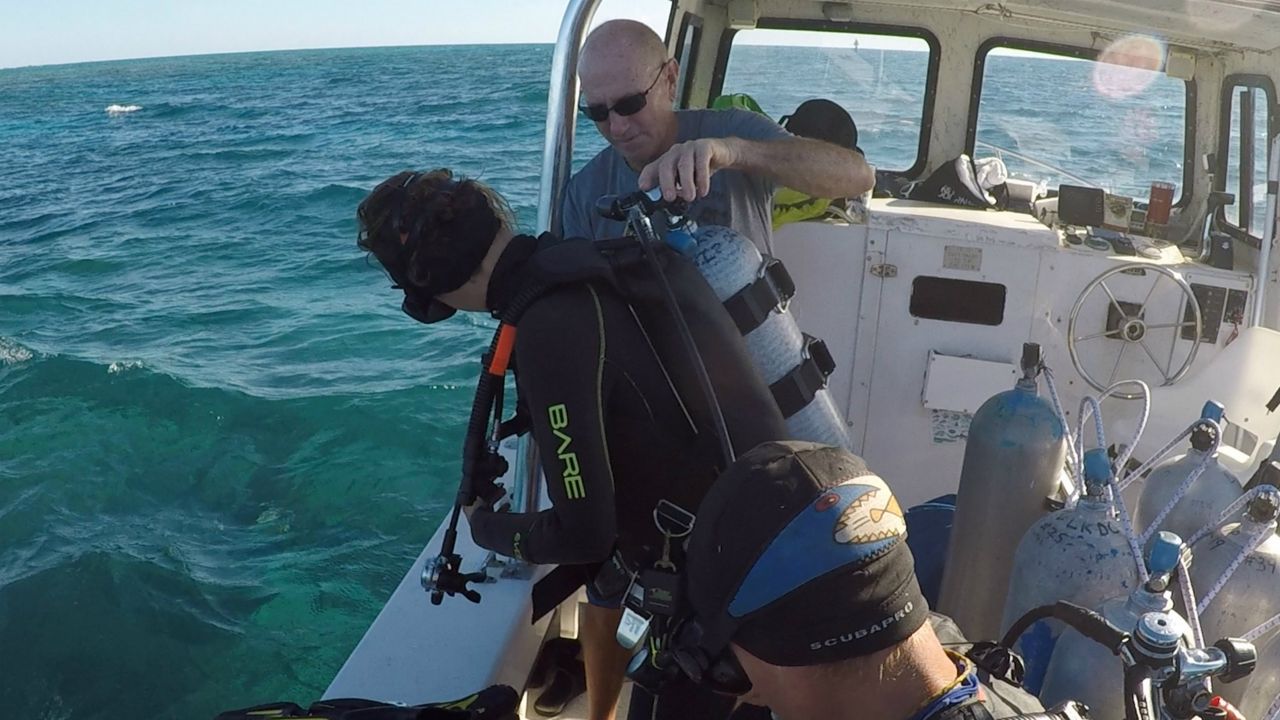 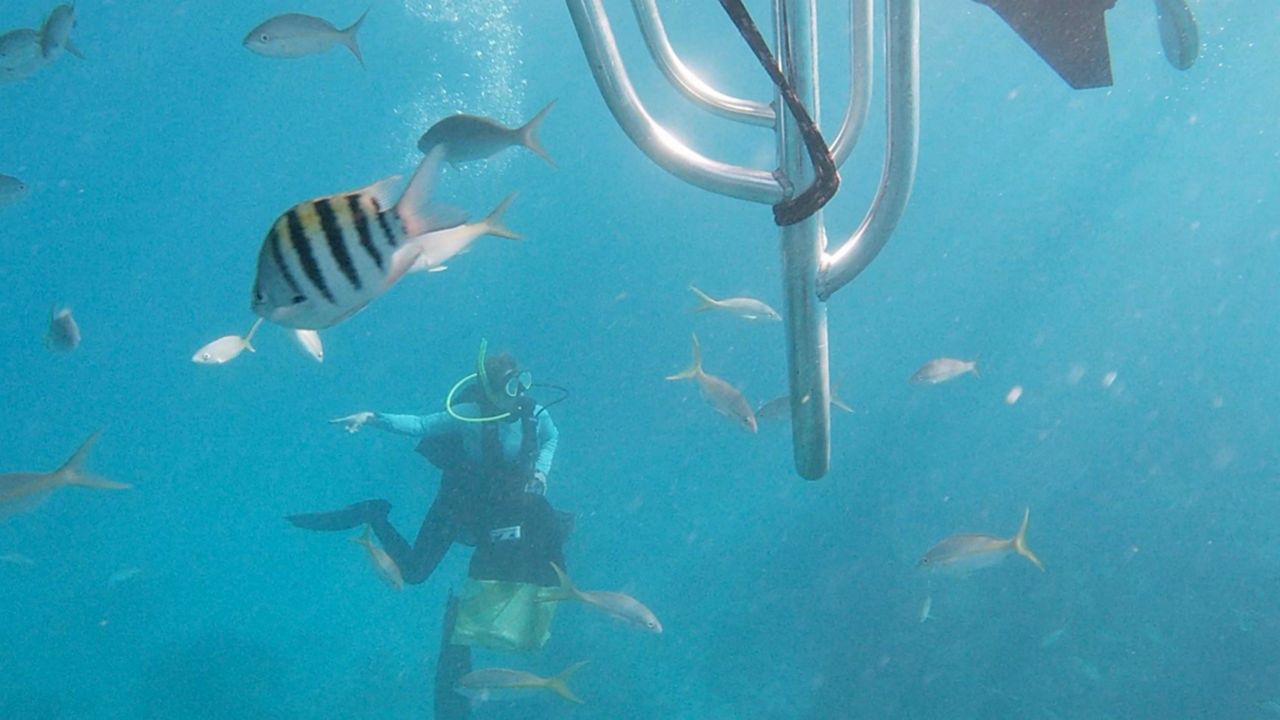 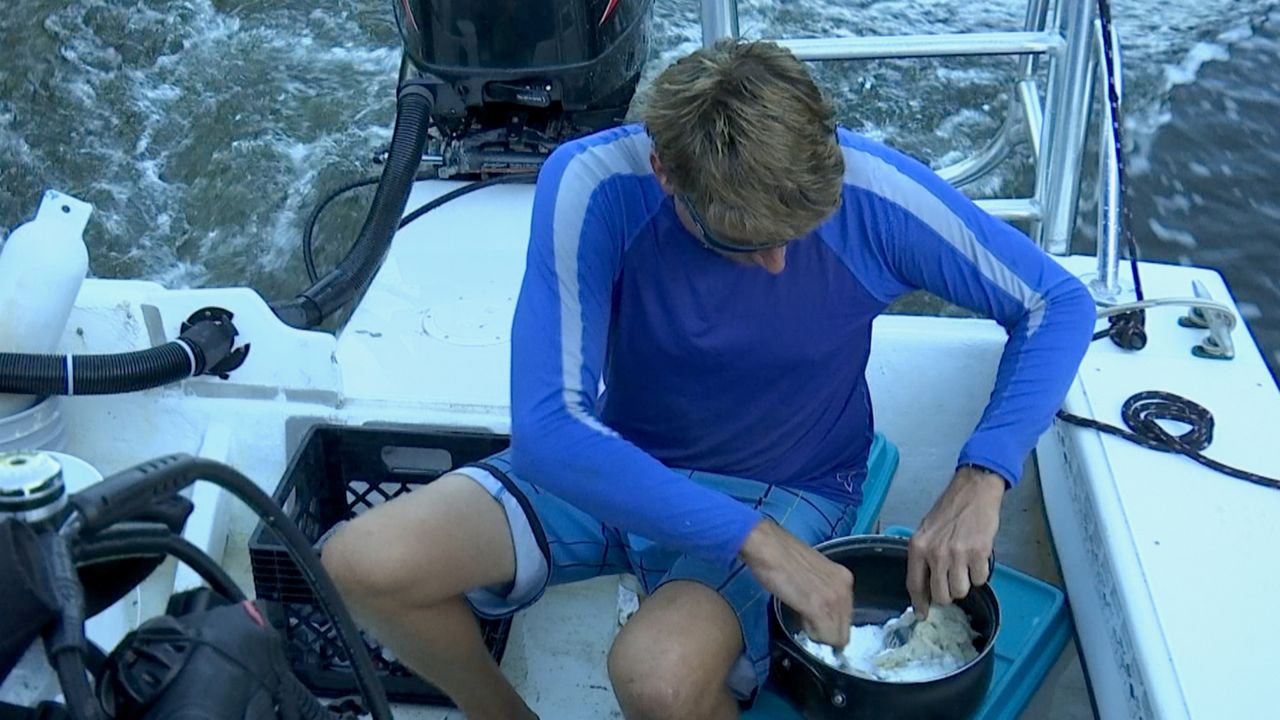 4 of 6
Research assistant Kevin Macaulay mixes up medical paste with amoxicillin that will be used to treat the coral. (Vince Pecoraro/Spectrum News) 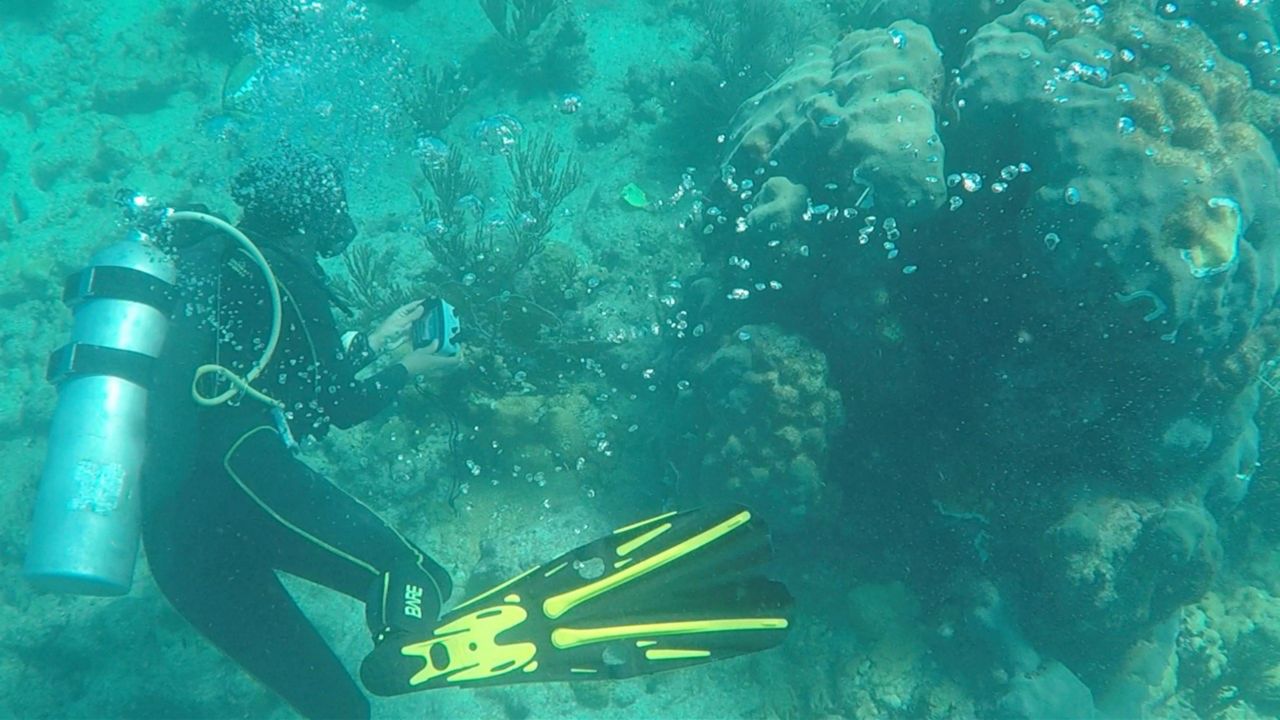 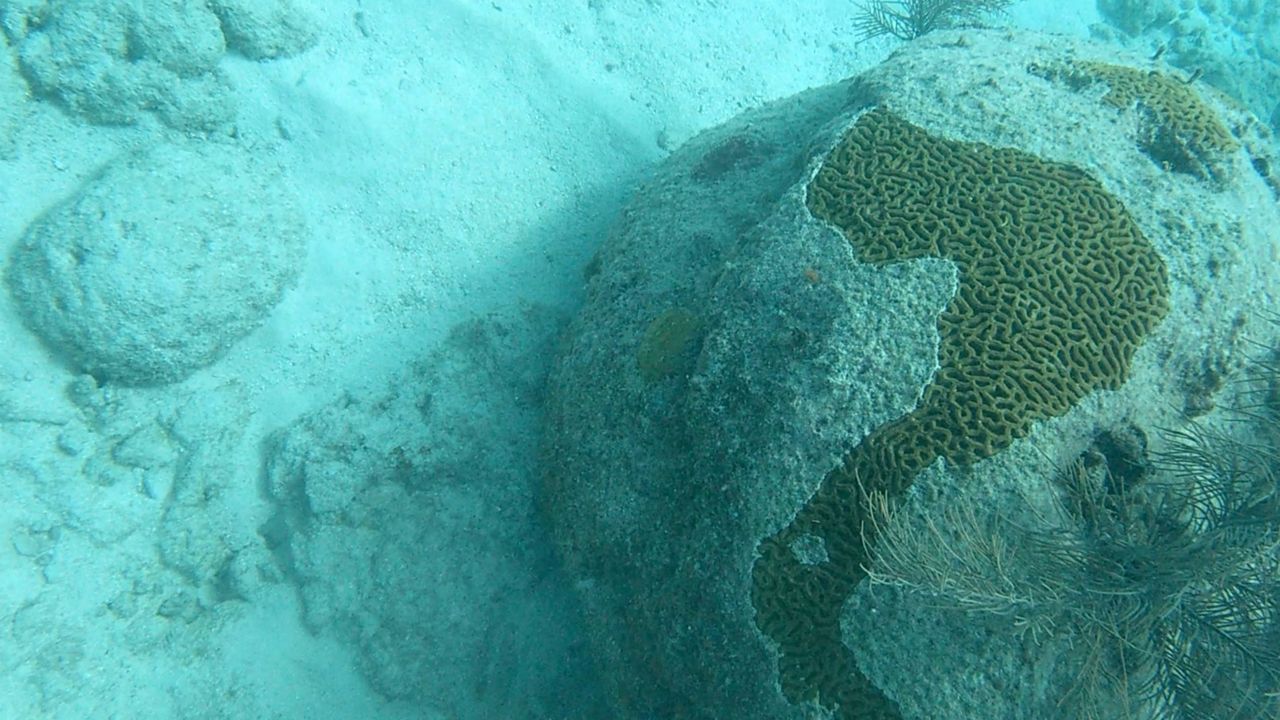 6 of 6
A coral reef exhibits a loss of tissue from what's suspected of being stony coral tissue loss disease in November off Looe Key Reef. Nova Southeastern University researchers are racing to save the reefs before the disease wipes them out. (Spectrum News)

"We Do a Lot of Crying Underwater": Researchers Battle Coral Disease With Human Drug

MARATHON, Fla. —  A few miles off the coast of the Florida Keys, four scientists in a small boat are racing to stop a mysterious killer.

What started as a coral disease outbreak off the coast of Miami-Dade County in 2014 has now spread along the state of Florida and beyond. It has recently been spotted as far away as the Dominican Republic.

“There isn't a whole lot of coral left in the southeast Florida region,” said Karen Neely, a coral ecologist at Nova Southeastern University.

Neely is leading a small squad of researchers who are monitoring and trying to slow the spread of the infection. The disease causes the tissue of the coral to degrade and fall off, turning vibrant reefs white as they die.

“The white that we talk about is not that the coral is turning white. It's not like bleaching,” said Emily Hower, a research assistant working on the project.

“It’s white because the skeleton is bare and dead. The tissue has died where the white is. That isn't going to necessarily come back,” she added.

Experts have not yet determined one specific cause, although Neely suspects it's bacterial and spread through the water. However, warming seas, pollution development and climate change may have contributed.

“For example, when you go in with some sort of injury, the first thing that people will tell you to do is to stop doing injurious things to yourself. And we don't really do that in the ocean. We still come out and use reef destroying sunscreens and allow for coral bleaching. There's still a lot of stressors that these sick corals are undergoing,” she added.

The Florida Fish and Wildlife Conservation Commission has found 38 of 40 reef sites in the Florida Keys have already been affected.

“I think people would be very shocked to know that within two weeks, a colony, a small colony, can be dead,” said Michelle Dobler, another member of Neely’s team.

The coral disease outbreak was discovered off the coast of Miami-Dade County in 2014. It has now spread along the state of FL & onto the Caribbean. The Florida Fish and Wildlife Conservation Commission found 38 of the 40 reef sites in the Florida Keys have already been affected. pic.twitter.com/341d4Wwhle

The race to save the coral

The scientists have been treating the coral already infected with a paste combined with amoxicillin. A Spectrum News crew accompanied the group during a day of field work off Looe Key Reef, one of the most coral dense regions in the keys.

“Most of the time, scientists and marine biologists spend a lot of time documenting particularly declines of ecosystems. And we're actually one of the few that are lucky enough to be able to get out here and try to do something about it,” Neely said.

On the boat ride out to the location, they mix up the antibiotics and fill dozens of syringes with the formula. They then apply the medicine directly onto the tissue of the sick coral, which slowly releases the drug over time.

"I think most of us don't have fingerprints at this point, because we're applying it to the corals. But whatever it takes, we do,” Dobler said with a laugh.

The team documents their findings, marking when they provide treatment with nails and large yellow tags directly onto the coral. They regularly return to each location and check back in on their progress.

“We go back to the coral, we look around and look where the nails are and see if there's any active disease, to see if that treatment was effective or ineffective,” Hower explained.

At Looe Key Reef, the scientists have tagged up to 800 coral. Neely is unsure how the reef would have fared if not for their intervention.

“We were out here a couple of weeks ago, and as we looked around, we realized everything here was either dead or had been treated by us,” she said.

Ron Stein, a boat operator with the Looe Key Reef Resort Dive Shop, has driven the scientists out to the reef during several of their medical missions.

“The problem is so massive, they are doing their best and they are trying. They are doing great here. They are controlling it," Stein said as he waited on board the vessel for the scientists to emerge from the water.

This is a look at what the sick coral look like — we captured this footage at Looe Key Reef, once known as the crown jewel of the Florida Keys. Locals tell us it is becoming an underwater graveyard. They say the biggest decline has been in the last year to 18 months. pic.twitter.com/VgcFDZKTrj

“Worldwide, more needs to be done. I hate to say that,” he added.

Stein has worked as a boat operator in the Florida Keys for 10 years. He said he often takes tourists to Looe Key Reef, known as the crown jewel of the keys. However, he said it’s quickly becoming an underwater graveyard.

“The biggest decline has just been in the last year to 18 months with this new disease. I came down here in the '80s originally, and it was totally different,” Stein explained.

More than 20,000 visitors come to the reef every year, and Stein said many have no idea the underwater ecosystem could be at risk of extinction.

“Daily, we hear people talk about how beautiful it is and how great this coral is. And we know that it's dying quickly. But, they don’t know what, they have nothing to compare it to. But the coral itself is in trouble,” Stein said.

The field work is challenging and labor-intensive. The researchers are out on the water for at least eight hours, manually applying the medicine, one coral head at a time.

“We do a lot of crying underwater. You come back to areas, and the disease is still really prevalent. It's, I mean, I don't want to say it's impossible, but it's daunting, and it can be super sad,” Hower said after wrapping up a day of work.

The treatment developed and implemented by the researchers at Nova Southeastern University in the Florida Keys has been used to save more than 2,000 corals across the Florida Reef Tract, including in Biscayne National Park and off mainland Florida.

Scientists in other parts of the Caribbean have now started using their same method to save corals infected by this very disease.

“It feels good to know without us this reef would look very different than it does, not just now, five years from now, and 500 years from now,” Neely said.

Although the long days on the water can take an emotional toll, the men and women in the group say they’ll continue to search for effective solutions.

“The problem isn't right in your face all the time. It's a tough problem to know is even going on. So getting the word out, doing these kinds of things is some of the best tools in our toolbox right now,” Macaulay said.