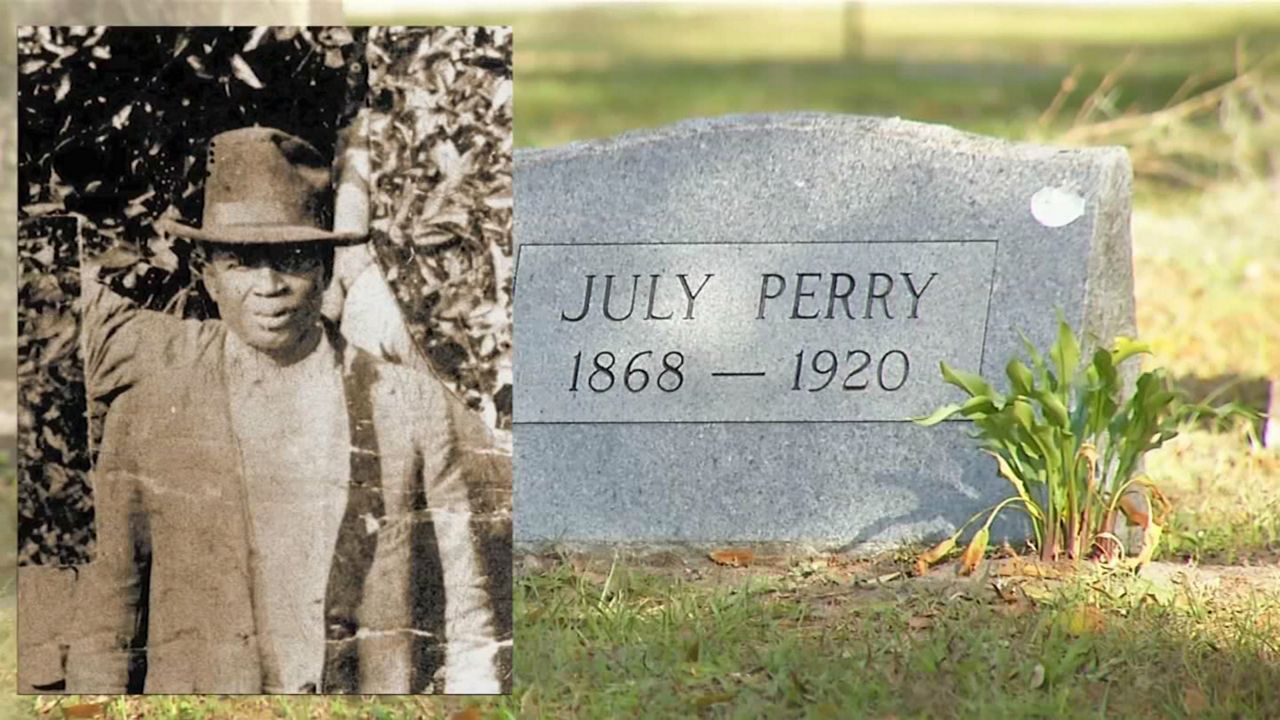 Ocoee's July Perry was lynched in November 1920 for trying to vote. Violence erupted, and dozens of black residents were murdered. Now, one of his descendants wants his life and legacy to be shared in history classes. (Spectrum News 13)

OCOEE, Fla. — Black residents of one Central Florida town eager to vote in the 1920s risked everything to try to cast their ballots. Now, nearly a hundred years later, there's an effort underway to recognize and compensate their descendants for the terror they faced for it.

On a crisp Florida morning, sunlight peaks through the hanging moss of a great oak tree in Greenwood Cemetery in Orlando.

Just below is a cold, hard reality of decades past: A simple headstone engraved with the name July Perry and the years of his birth and death.

But what happened in between those years is something one state senator wants us all to know about.

"It had to be terrifying," state Sen. Randolph Bracy (D-Ocoee) says.

He's reflecting on the year 1920 and on who Perry was.

"July Perry was wealthy — considerably wealthy for the 1920s — and as a black man, they were doing very well," Bracy says.

It was particularly remarkable during that time of racial segregation and humiliating Jim Crow laws.

"Florida had one of the worst records of racial violence in this country," Bracy says.

One of the darkest days was November 3, 1920 — the day the Ocoee Election Day riots started.

"I just think that it's time that people know about this story," Bracy says.

The last presidential election millions didn’t bother to vote. Tonight on @MyNews13 the black residents of #Ocoee so eager to vote they risked everything & what’s being done now to recognize & compensate their descendants @rbracy30 #BlackHistoryMonth pic.twitter.com/ndunFoGqeS

Just a day before and for weeks following that day, violence flared. It's the story of black suffrage: A white mob attacked African Americans because they tried to vote. Chaos erupted, and violence spread throughout Ocoee and west Orange County.

No one knows the story better than Sha'Ron Cooley McWhite.

July Perry was her great uncle. She recognizes the pain her uncle endured fighting for a better life and the right to vote.

"(He was) placed on a light pole with a sign that read, 'This is what we do — using the n-word for people who try to vote. That is horrific. That's such a tragedy," McWhite says.

"They found him, lynched him, and subsequently burned the rest of the north Ocoee down," Bracy says. "Ocoee's African American population was forced to abandon their homes and property or risk a fate similar to July Perry's at the hands of a deputized mob and local government officials.  We're talking about at least over 300 and some odd acres that's worth millions of dollars now. According to census records, hundreds of black residents fled as a result of the incident, and an estimated 50 black residents were murdered during the Election Day riot."

The senator is sponsoring SB 1262 and SB 1264 to compensate descendants of individuals who were killed, injured, or victimized in the Ocoee Massacre and to have the historical event taught in Florida's schools, incorporated into museums, and making state parks eligible to be named in recognition of the victims. There's also a bill to designate a section of State Road 438 in Orange County as "Julius 'July' Perry Memorial Highway."

Bracy says it's time to compensate or pay the descendants of the victims. He says the state played a critical role in what led to the violence, stealing land owned by African Americans and giving it to white residents.

"Property was taken. There was a monetary value to that, and when you look at the government's role in that, I really don't see how you argue against that," Bracy says.

McWhite, a teacher, says that compensation should be used to educate.

"The life, his legacy, the story should be shared in our history classes," she says.

It's a legacy that has recently been memorialized with a historical marker outside the Orange County Regional Historical Center in downtown Orlando. Ocoee city leaders have also proclaimed November 2 as a day of remembrance to honor the victims of the massacre.