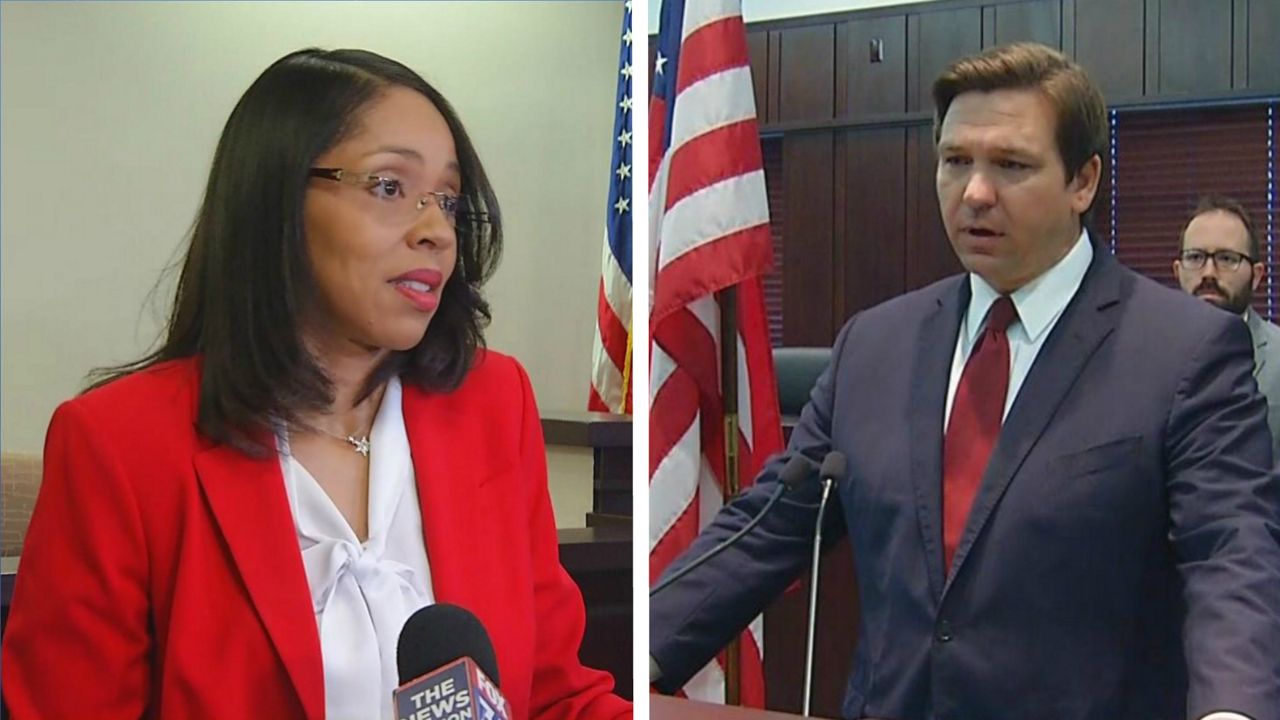 DeSantis made the announcement during a last-minute appearance Friday afternoon at the Osceola County Administration Building in Kissimmee, and soon issued an executive order making it official.

He said State Attorney Brad King of the Fifth Judicial Circuit will be taking over prosecution of the murder case.

"At the end of the day, this is not about a particular sheriff or state attorney or governor, this is about Nicole and her memory. She can't speak for herself, so we as Floridians need to ensure justice is done on her behalf," he continued.

Ayala and Osceola County Sheriff Russ Gibson have been in a "public and personal" feud over the handling of the case, state Attorney General Ashley Moody said earlier this month in a letter to DeSantis.

"As a former judge and prosecutor, I was unsettled by the situation in Osceola County and feared it was escalating in a manner not conducive to the ends of justice. With the appointment of State Attorney Brad King, I am encouraged that the Montalvo family will receive the justice they deserve," Moody's office said in a statement.

Montalvo's remains were found in October 2019 on her in-laws's property in St. Cloud a few days after she was reported missing. Her estranged husband, Christopher Otero-Rivera, and his father, Angel Rivera, face charges in her death.

This isn't the first time Ayala has been removed from high-profile cases. In April 2017, then-Gov. Rick Scott removed her from almost two dozen first-degree murder cases and reassigned them to King after she announced she wouldn't seek death sentences because she thought it wasn't "in the best interests of this community or the best interests in justice.

Steven Montalvo, brother of #NicoleMontalvo says the family wants to reiterate that their frustrations are not directed towards the individuals who have been working “tirelessly” on this case… They only want justice.@MyNews13 #News13Osceola #AngelRivera #ChristopherOteroRivera pic.twitter.com/QpPySHNq6A

Ayala held a news conference January 17 to angrily accuse Gibson of releasing falsehoods in the case, humiliating her office and homicide team. She said she directed the Sheriff's Office not to make any arrests yet so that they had more time to build their case. Once an arrest is made, Ayala said, an accused person must be prosecuted in a set amount of time.

On Friday afternoon, Ayala hit back at the action to remove her from the Montalvo prosecution.

"The executive order is riddled with inaccurate facts," she said.

"To say this action violated all concepts of due process and equal protection is an understatement," Ayala said.

She accused the governor and sheriff of letting their emotions dictate the course of the investigation.

"There are no shortcuts in the pursuit of justice," Ayala said. "Despite the action taken today, we can't opt for emotional responses but must be committed to following the law and holding up our high ethical standards."

"We must make our decisions on evidence and hard facts."

SAO Aramis Ayala: To say this action violated all due process is an understatement... Despite demeaning actions there is still a killer there. We will abide by the executive order without any problems.@MyNews13 #News13Osceola #NicoleMontalvo #AngelRivera #ChristopherOteroRivera

Ayala also said the governor never reached out to her or her office before removing her.

"It's unfortunate that the governor personally met with sheriff and family members of Nicole Montalvo, yet he never personally called or reached out to speak to me or anyone involved in the case in my office. The sheriff enjoyed the privilege of being consulted that I nor anyone in my office enjoyed. He also had the privilege of having his word taken at face value," Ayala said.

She said ultimately, she stands by the prosecutors in her office who requested that an arrest not be made right away so they could build a case.

"Based upon the facts submitted to us, none of our attorneys could take an oath and swear (right now that) we could prove this case beyond a reasonable doubt."

"It’s really almost a lack of confidence the sheriff is demonstrating, demonstrated in the state attorney,” Haas said.

He also said the situation can add unnecessary stress to an already grieving family like the Montalvos.

“Any extra turmoil to pile onto what they’re going through is, as you can understand, a very difficult process,” Haas explained.

Meanwhile, Montalvo family members said their focus is on holding those responsible for Nicole's death accountable.

Wearing a purple ribbon for domestic violence awareness on his suit, Montalvo's younger brother, Steven, opened up about the frustration this case has caused. The family wants to reiterate that their frustrations are not directed toward the individuals who have been working "tirelessly" on this case but that they only want justice.

"Nicole was a loving mother, daughter, sister and friend to so many out there," Steven Montalvo said. "She was a single mother working tirelessly to make a better life for her and her son. We will not rest until justice is served for Nicole, and her son is ensured the safe and healthy environment he deserves to grow up in."

In a statement, Gibson supported the governor’s actions and added, "The strength and dignity you have displayed as a family is second to none and our commitment to you is that we will never forget and never stop working for Nicole."

David Haas told Spectrum News no matter who’s right in this back-and-forth between law enforcement and prosecutors, one thing is clear.

“(It's) clearly a distrust that suddenly or somehow developed, and it’s disheartening I think for the citizens of both Osceola County and the other citizens in that circuit,” Haas said.

Spectrum News 13 also spoke to Migdalia Perez, the attorney for Christopher Otero-Rivera. Christopher is Nicole's estranged husband who is charged with failure to report a death.

Perez said the governor’s statement was filled with assumptions.

"Without sufficient evidence, he used the terms 'murder' and 'killed' and completely disregarded the presumption of innocence my client holds," Perez said.

She said the reassignment does not affect her defense for Otero-Rivera. “Quite frankly, (this) was a desperate act in the face of an impending deadline." She thinks the new prosecutor will be faced with the same investigative reports and results as the prosecutors in the Ninth Circuit.

“I quote Ayala in that the sheriff still does not know who actually killed Nicole Montalvo. There still remains a lack of evidence and evidence cannot be manufactured,” Perez said.