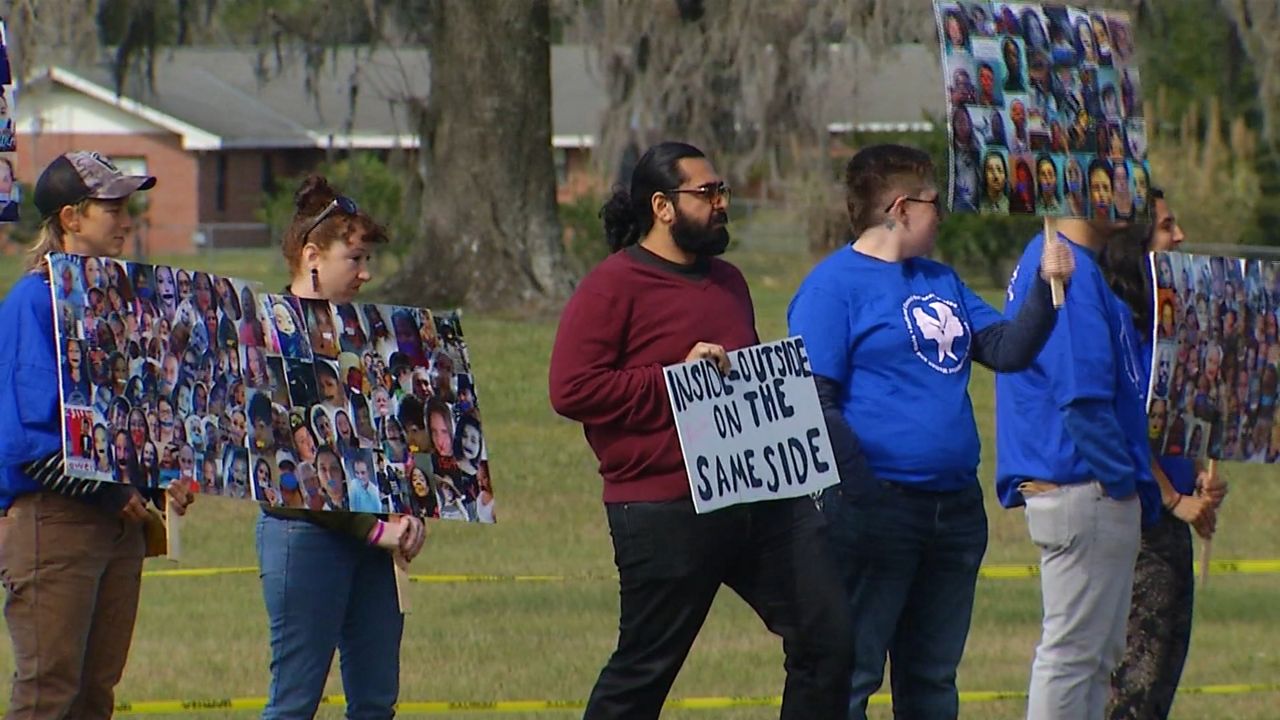 OCALA, Fla. — Former inmates of Lowell Correctional Institution, a facility for female prisoners, are protesting after a corrections officer accused of trying to poison an inmate was arrested and fired.

She's accused of spraying bleach in a drinking cup and trying to serve it to an inmate after the two got into an argument.

Former inmates said during Sunday's protest that they've endured violence and abuse inside the walls of the prison for years.

Dozens of former inmates and supporters gathered outside the correctional facility Sunday in Ocala to share their message with the community. They want Williams to be prosecuted to the fullest extent of the law. Further, they don't think she should receive leniency just because she previously wore a badge.

They also want to speak for the inmates still inside who can't be heard.

"They treated us like we were unimportant," former Lowell inmate Rachel Kalfin said. "Lockdowns, no water for two weeks. They were giving us ... they were shipping water in and we were bathing with a bottle of water every two days. We had nothing to flush the toilets. They didn't care about us. How we felt and what we went through didn't matter."

According to the facility's website, Lowell Correctional is a facility for female inmates. It has a capacity of 1,456. Last summer, a cooling unit malfunctioned at one of the dormitories, where temperatures soared above 90 degrees. Fans were brought in to provide cooling relief during repairs. A concerned citizen called Spectrum News 13 and asked us to investigate the air-conditioning problem.

According to the arrest report, Williams admitted to putting a cleaning agent in the cup.

The Florida Department of Corrections tells us they have zero tolerance for this kind of behavior and that Williams was immediately fired.

"The Florida Department of Corrections takes all allegations of abuse or mistreatment of inmates seriously and encourages all inmates and staff too promptly report inappropriate or illegal conduct. FDC has a robust inmate grievance process, along with an anonymous TIPS line that contacts the Office of Inspector General directly, to ensure inmates are afforded every opportunity to report misconduct without fear of retribution.

The OIG is responsible for ensuring all reports of misconduct are thoroughly investigated. Any employee found to have acted inappropriately or illegally faces disciplinary action up to and including dismissal and arrest. FDC has zero tolerance for staff who act inappropriately and contrary to our core values: respect, integrity, courage, selfless service and compassion.

The leadership at Lowell Correctional Institution has a track record of holding employees accountable for misconduct. Lowell Correctional Institution has some of the most robust programming options for inmates in the state, and is committed to fulfilling its important public safety mission while preparing the individuals in their custody for successful reintegration into the community upon the completion of their sentences."