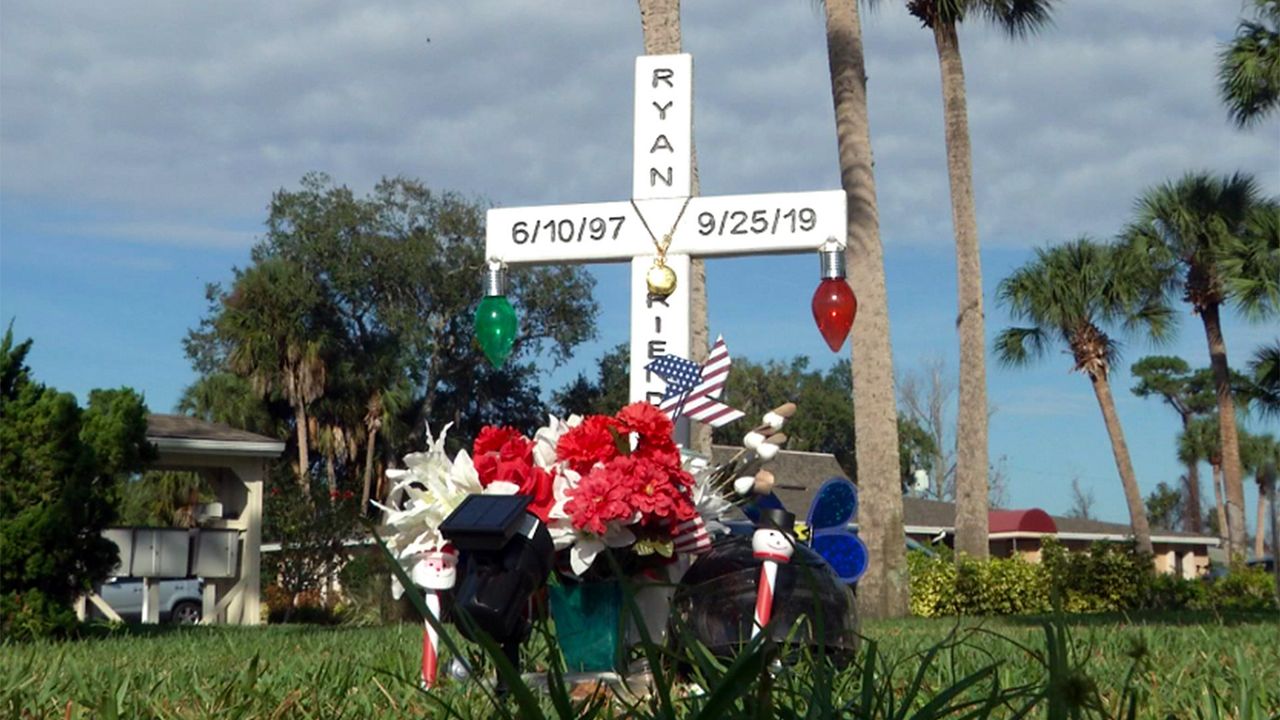 Laurie Friend is mourning the loss of her 22-year-old son Ryan. He lost his life on September 25, 2019 in an accident at the intersection of Nova Road and Miles Drive in Port Orange. (Nicole Griffin/Spectrum News 13)

PORT ORANGE, Fla. — A Port Orange mother is demanding change after losing her son to a traffic accident.

Laurie Friend is mourning the loss of her 22-year-old son Ryan.

He lost his life on September 25, 2019 in an accident at the intersection of Nova Road and Miles Drive in Port Orange.

Friend claims her son was on his motorcycle on his way to the gym when he was hit and flung feet away.

“The man that hit my son came from across the street. He crossed one, two, three, four lanes of highway traffic as well as the median, the intersection area there… and somehow he struck my son,” Friend explained.

She said her son was very loved, as shown by a well maintained memorial situated near that intersection. She said she did not believe what had happened until she saw him for herself at the hospital.

“That was the most devastating thing that’s ever happened to me in my life,” Friend said.

But she said what happened next has also been devastating.

The driver deemed responsible was only given a citation for failure to yield the right of way, costing $166. She claims the Port Orange Police didn’t investigate fully.

“There are just so many questions involving the investigation that is just tearing up our family," said Friend. "We don’t have answers and nobody has the answers for us. It seems like everyone is passing the buck to someone else."

In a statement, a Port Orange Police spokesperson told Spectrum News 13, "I can say that we did not take measurements at the scene of the accident, which is not consistent with our policy. It is important to note, the absence of measurements would not change the outcome of the investigation, nor would the at-fault driver be subject to any greater punishment.​

They also explained why the driver did not face criminal charges:

"Our investigation did not reveal the existence of any elements of reckless driving consistent with the willful and wanton disregard for the safety of persons on the part of the driver of the vehicle. Furthermore, the driver did not exhibit any signs of impairment consistent with operating a vehicle under the influence, nor was there any evidence at the crash scene which contradicted that finding.

Because there was no probable cause that a crime occurred as defined by Florida State Statute, no charges were able to be filed."

This is why Friend, along with her friends and family, is hosting a protest this weekend where her son was killed.

“We know that chances are the man (who) hit my son will never be held responsible however I want to make sure that within the city of Port Orange … policies and procedures are followed from now on, that there are checks and balances all along the way,” Friend said.

"My family is destroyed over the loss of my son and someone has to be the voice for this," Friend said. "It could be your son next, it could be somebody’s brother or father. This didn’t have to happen, but it did.”

While Friend works to spark change, she knows Ryan would be proud.

“If the very least, if his death saves somebody else, he is smiling,” Friend said.

That protest is happening Sunday at 3 p.m. at the intersection of Miles Drive and Nova Road.