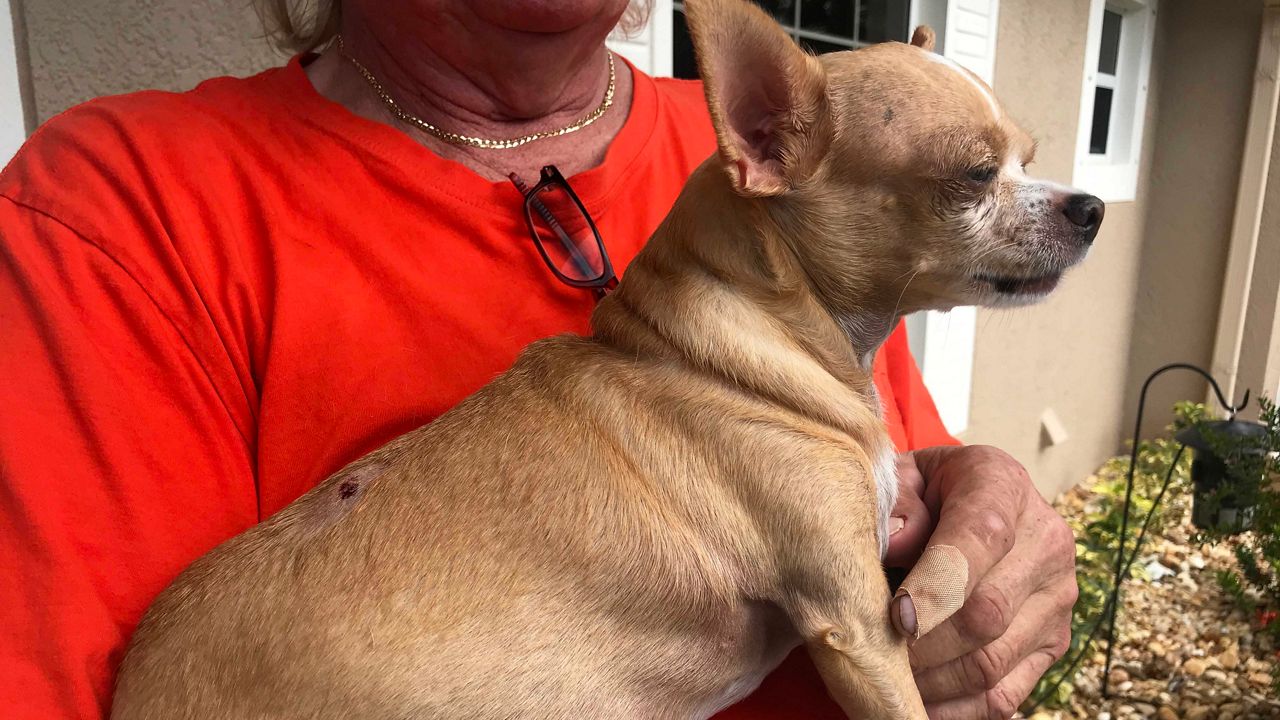 Cricket, a 9-year-old Chihuahua, was grabbed by a red-tailed hawk Thursday. Luckily Mike Mahowald was able to save the dog. (Greg Pallone/Spectrum News)

PALM BAY, Fla. — A Palm Bay dog owner recently went through a frightening ordeal after his precious dog was grabbed by a red-tailed hawk looking for a meal.

"I went to the garbage to throw some paper away," said Mike Mahowald, who was out in his front yard, knocking out some chores Thursday afternoon.

Feet away from him, as always, was his trusty sidekick Cricket, a 9-year-old Chihuahua.

"And all of a sudden (Cricket) started screaming," Mahowald told Spectrum News.

Little did he know, high above, a large hawk was lurking and zeroing in on the six-pound dog. That's when the bird went on the attack.

"His wingspan had to be five-feet wide," Mahowald said.

The hawk hooked its sharp talons into Cricket when Mahowald went into big-time protective mode. He managed to get the dog out of the hawk's clutches, and shooed it away.

"A lot of red-tailed hawks will hunt with their talons," said Chelsea Goss of Melbourne's Florida Wildlife Hospital.

The talons are similar to "Owl-iver's," a Great Horned Owl, who lives at the hospital.

"Usually when these guys attack their prey, they are going to kill with that first blow," Goss explained.

She said hawks can do the same thing.

But why would this hawk attack a Chihuahua in someone's front yard? FWH Executive Director Tracy Frampton says it may have to do with human development forcing wildlife out of their natural habitat.

"If you are cutting down the trees, whatever they're eating may be gone," Frampton said. "So they are looking for new places to forage."

Hawk-nesting season is upon us, so the birds are on the hunt.

Cricket is going to be OK. The family says they are going to be more vigilant, an eye to the sky, when he is outside.

Florida Fish and Wildlife Conservation Commission says it’s received 18 raptor calls so far this year in Brevard County — 14 of them are hawks, and four for vultures.

FWC recommends keeping pets on a leash, and keeping a close eye on them, even in a fenced yard.