The Coast Guard Cutter Paul Clark is based in the Port of Miami and patrols the waters of South Florida for migrants and drug-runners. (Vincent Pecoraro/Spectrum News)

1 of 5
The Coast Guard Cutter Paul Clark is based in the Port of Miami and patrols the waters of South Florida for migrants and drug-runners. (Samantha-Jo Roth/Spectrum News) 2 of 5
The Coast Guard Cutter Paul Clark is based in the Port of Miami and patrols the waters of South Florida for migrants and drug-runners. (Samantha-Jo Roth/Spectrum News) 3 of 5
Crews aboard the Cutter Paul Clark patrol the waters off Miami and intercept migrants. They also say their top priority is to keep the migrants safe, many of whom were traveling on dangerously overloaded and unsafe boats. (Vincent Pecoraro/Spectrum News) 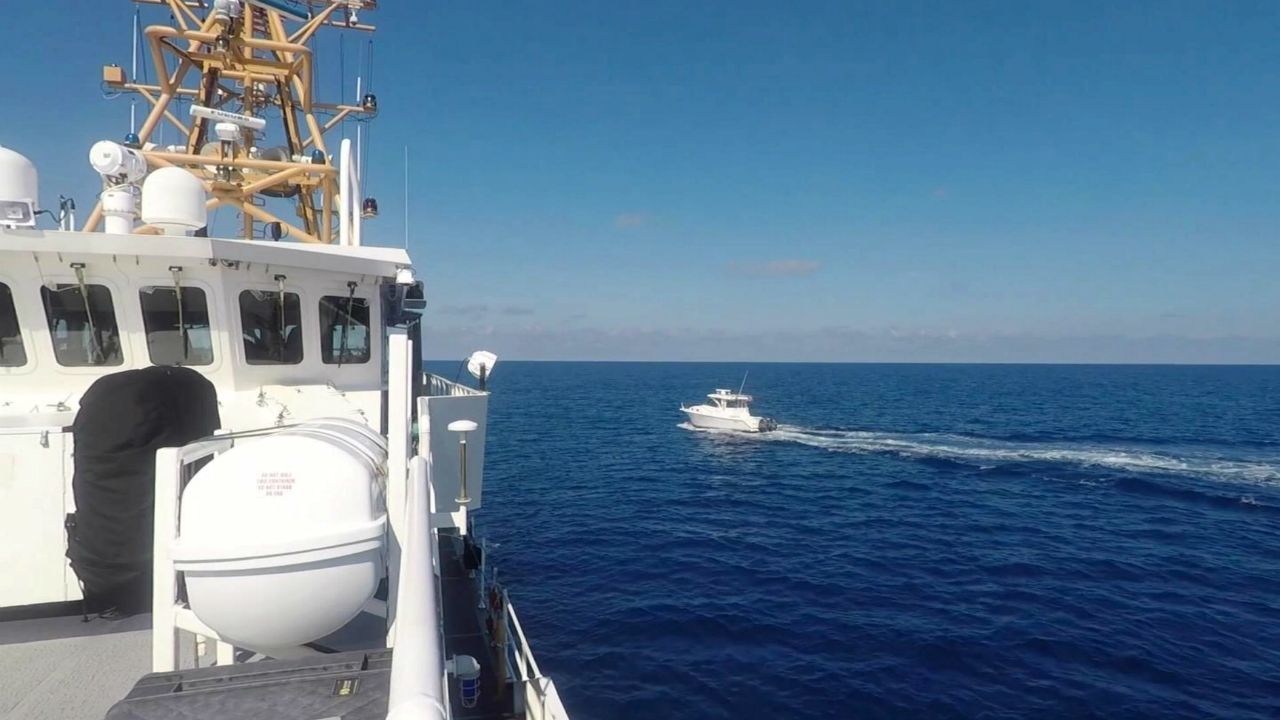 4 of 5
The Coast Guard Cutter Paul Clark is based in the Port of Miami and patrols the waters of South Florida for migrants and drug-runners. (Vincent Pecoraro/Spectrum News) 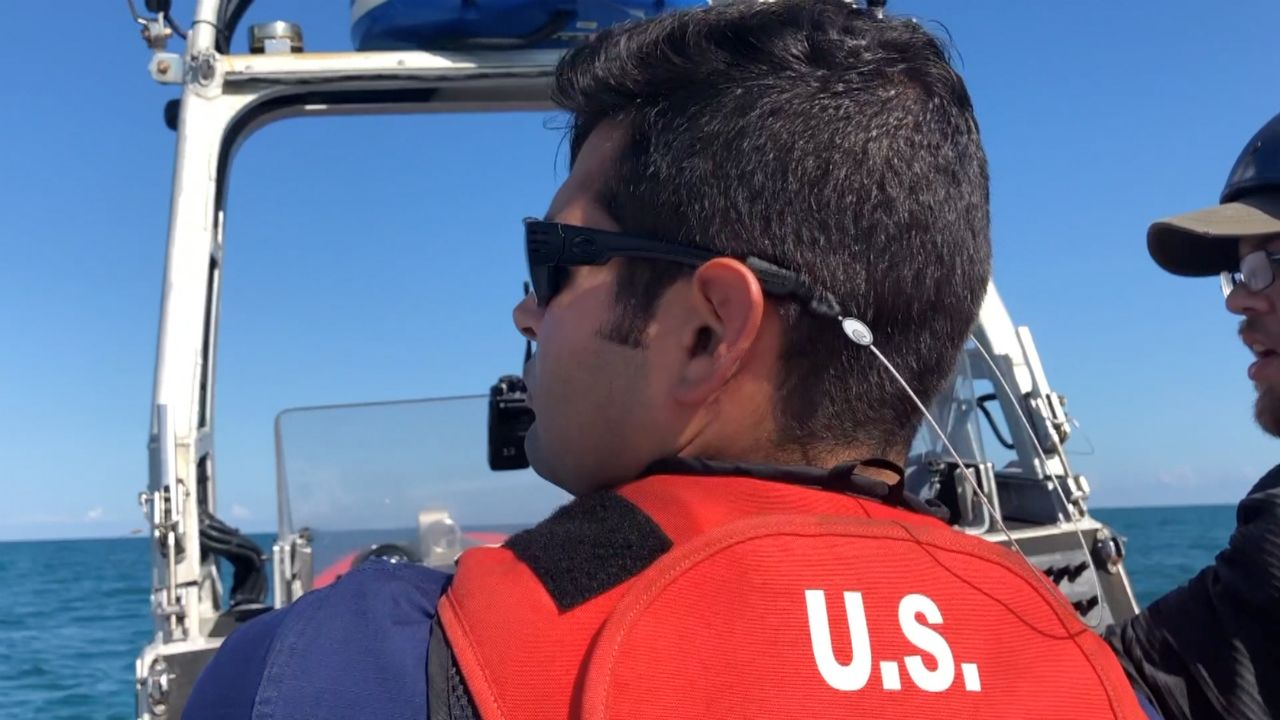 5 of 5
Petty Officer 2nd Class Luis Ortiz looks out over the waters off South Florida during a recent patrol mission. (Samantha-Jo Roth/Spectrum News)

EXCLUSIVE: Go Inside the Coast Guard's Mission to Intercept Migrants at Sea

MIAMI, Fla. — There’s been an increase in the number of undocumented migrants trying to enter the U.S. through Florida’s coastal border, according to data compiled from this last fiscal year by the U.S. Coast Guard.

Within the past fiscal year, there’s been a 26 percent spike in migrant interdictions in the U.S Coast Guard’s 7th District, based in Miami. The Coast Guard in this region oversees activities in Florida, Puerto Rico, Georgia, South Carolina, and 34 foreign nations and territories.

When it comes to addressing the flow of migrants into the U.S., the Trump administration has been focused on securing the southern border with the president’s promise to build a border wall.

“There is no wall around South Florida, around our coastline, and we have thousands of miles of coastline,” said Lt. Cmdr. Kristopher Ensley, captain of the Paul Clark.

Spectrum News received special access inside the tactical operations of the U.S. Coast Guard, where crews aboard cutters such as the Paul Clark are intercepting thousands every year attempting to enter the U.S. illegally. Just last month, the Coast Guard in this region has detained more than 300 on these waters.

The crew aboard the Paul Clark regularly monitors the miles between Miami and the Bahamas. The country is often used as a staging location, where migrants pay smugglers to take them by boat about 80 miles to the coast of South Florida.

More than 90 percent of the Coast Guard’s migrant interceptions this year have taken place in this district, and crewmembers aboard the Paul Clark have seen their share of the action.

“We’ve found nine illicit traffickers. We stopped eight of them, but one of them managed to get away from us, unfortunately,” Ensley said. “Of those eight, one was a drug smuggler, and the other seven were human traffickers with large quantities of cash on board,” he said.

When the crew discovers a potentially suspicious vessel, it deploys a fast response boat to quickly engage the people aboard.

“We’ll do a boarding and throughout the course of a boarding, we will determine if there’s a suspicion of migrant trafficking and typically from there, we bring them on board Coast Guard Cutter Paul Clark,” Ortiz explained.

In the two years since Ortiz has been assigned to this unit, he’s found that the undocumented immigrants they’ve come across are from just about everywhere.

“I’ve seen so many different nationalities on board, all the way from Sri Lanka, China, Brazil. I think we had an Irish gentleman on board one time,” Ortiz said.

When the crew detains migrants, they take them to the back of the vessel, where they try to make them as comfortable as possible with some shade, a change of clothes, and meals of rice and beans before they hand them off to the next law enforcement agency.

Ensley notes the ship is not intended to be a detention center.

"It’s not comfortable to be detained on this ship. You’re outside, you could get wet, you could get cold,” Ensley said. “We work through that process expeditiously to turn you over to whatever law enforcement partner is appropriate or to return you to whatever country you came from."

That process could take days, and until the detainees are turned over to the proper law enforcement agency, they are watched by multiple crew members 24 hours a day.

“It can be a heartbreaking ordeal. You’re for all intents and purposes, you have somebody’s life in your hands, and you are responsible for them,” Ortiz said.

The crew’s top priority is to keep migrants safe on the water, and many of the situations could become fatal if they don’t intervene, they said.

“We are saving lives out there, because a lot of these folks that are running and smuggling human beings into America via maritime means are not doing it in a safe manner,” Ensley said. “They're overloading these boats and trying to sneak people into America."

According to Ensley, the crew intercepted 10 Venezuelans last week trying to enter the U.S. through the Florida Straits. They turned them and the two suspected smugglers over to Customs and Border Protection and U.S. Immigration and Customs Enforcement.

In the 2019 fiscal year, the U.S. Coast Guard intercepted 2,441 migrants attempting to enter the country via international waters. During that time, U.S. Customs and Border Protection apprehended 851,508 migrants trying to cross the southern border with Mexico.