A Lynx bus sits on its side on Interstate 4 on Tuesday afternoon. (Sky 13) 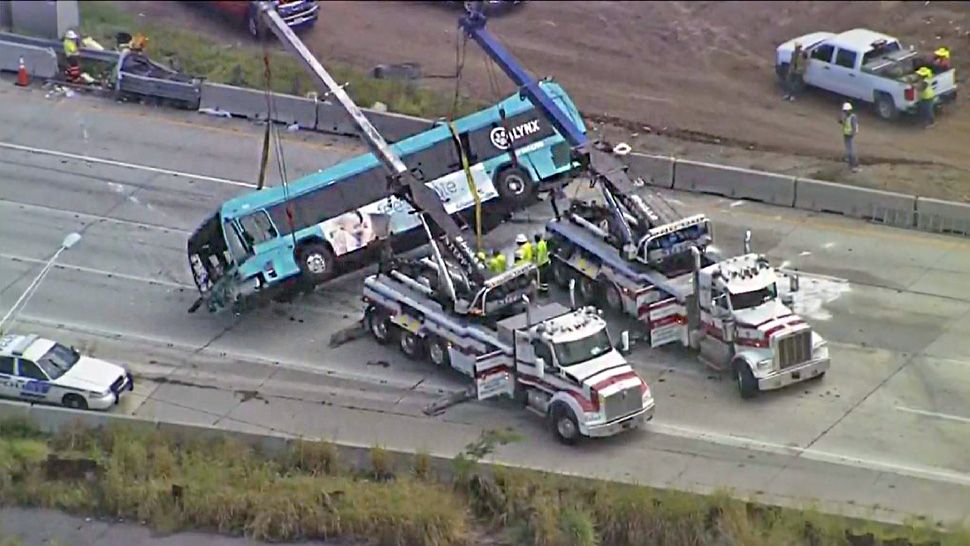 1 of 3
A Lynx bus is right side up after falling on its side on Interstate 4 on Tuesday afternoon. (Sky 13) 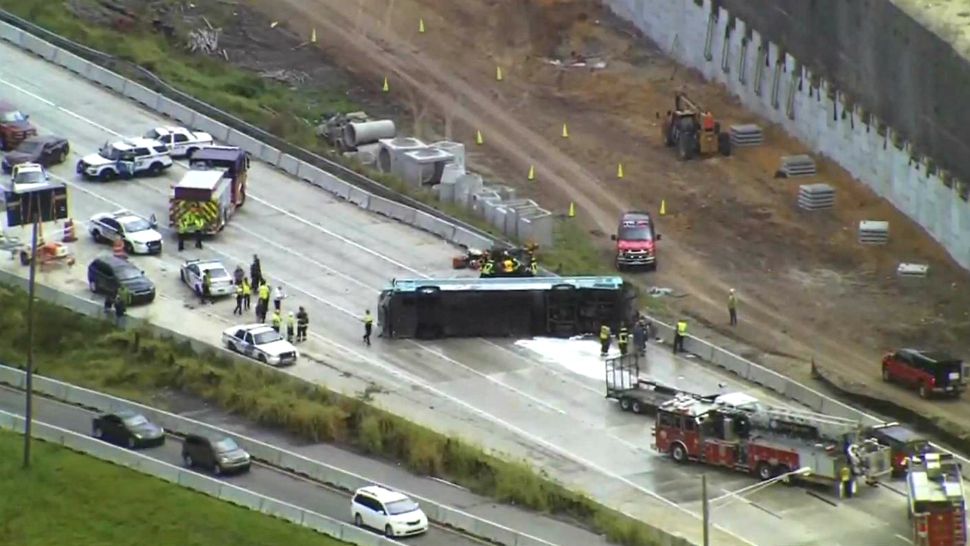 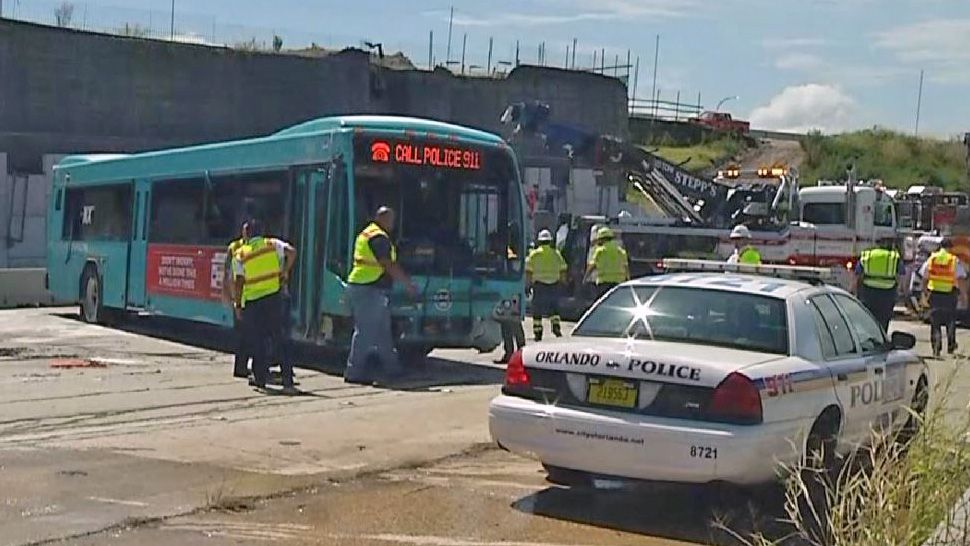 3 of 3
An overturned Lynx bus on Interstate 4 was put upright. Nine people were transported to hospitals. (Sky 13)

PHOTOS: Lynx Bus Overturns on I-4 — at Least 9 Sent to Hospitals

ORLANDO, Fla. —  At least nine people were transported to hospitals late Tuesday morning after a Lynx bus overturned on Interstate 4, snarling the interstate for several hours.

The bus crash, which turned into a hazmat scene, happened in the westbound lanes of I-4 at Exit 80 (U.S. 441/Orange Blossom Trail) in Orange County just before noon.

The bus ended up on its side. It took two massive wreckers to upright the bus.

An overturned Lynx bus on Interstate 4 was put upright. Nine people were sent to an area hospital.

It was loaded on a flatbed and removed from the interstate.

"Hazmat crews are on scene because of an oil leak. They will remain there until the bus is upright to remove any possible debris," Ashley Papagni, a spokeswoman for the Orlando Fire Department, said.

Official statement from Lynx regarding the crash from I4. @MyNews13 #News13Orange pic.twitter.com/9mZKOhcvkO

Nine people from that crash were transported to hospitals, Papagni said. That included the driver and eight passengers.

The Orlando Police Department, however, estimated the patient count to be between 10 to 12 people.

Alex Robles was one of seven people brought to Orlando Regional Medical Center of the nine people total on the crashed Lynx bus.

"We were coming from downtown Orlando, and I was taking a nap, and the bus just started swerving, and it started hitting the rails," he said.

Robles said he was heading home after taking care of some personal business in downtown Orlando and uses the Central Florida transportation system almost every day.

He said he and some other passengers escaped the bus through emergency exit windows.

"It happened so fast, I can’t even, I got no words for it," Robles said.

He said he and other passengers are doing OK, and he's ready to go home — via Lynx bus.

"It's just like getting back on the bike — you fall off, then you get back on it," Robles said.

Orlando Health said of seven patients it received, one had been discharged as of 3 p.m., and the six others were in stable condition.

Traffic, which was backed up until Anderson Street, was diverted onto Michigan Street, according to Orlando Police. The interstate reopened about a couple of hours later.

A preliminary report on the crash issued by Lynx said Steven Silva was the driver of the bus, which was traveling westbound on I-4 near Rio Grande Avenue when, at 11:39 a.m., the bus drifted slightly into an adjacent lane where the road curves. Silva overcorrected and lost control of the vehicle, the report says. The bus, which was carrying eight passengers in addition to the driver, skidded into a concrete barrier and flipped on its side.

The road was wet because of rain, and the bus was traveling between 52 and 56 mph in a 50 mph zone, the Lynx report says. No other vehicles were affected. Silva has been with Lynx since April and has one minor reported crash.

Katie Lockard, a marketing specialist for Lynx, apologized to I-4 drivers who were stuck in extensive traffic delays and noted that all the injuries were not serious.

“We’re just thankful that everyone is OK,” Lockard said.

Eight people were sent to hospitals after a Lynx bus overturned on Interstate 4 — one of two crashes on the highway right now.

Orange County Master Deputy Greg Rittger was in one of the vehicles traveling on I-4 westbound when he saw a Lynx bus on its side.

"It’s not every day you see traffic come to a complete stop on I-4, but I knew something had just happened," Rittger said.

When the deputy arrived at the crash scene, the driver of the bus was able communicate with him.

"His first concern was his passengers," Rittger said of the bus driver. "He was real concerned about the other passengers and getting them out first, and some of the passengers had already escaped from the back hatch and through the roof emergency exit hatch."

"This was an extreme accident, anytime you are dealing with a bus and this many passengers," Rittger said.

The cause of the crash is now under investigation. According to Lynx, the bus had up to eigh cameras on it, so investigators may be able to go back and see what led to and caused the crash. Cameras however, are not watched in real time.

Still, "this could have been a lot worse," Rittger said.

Motorists stand outside of their vehicles on Interstate 4 near Michigan Street on Tuesday afternoon after a Lynx bus overturned. (Asher Wildman/Spectrum News 13)