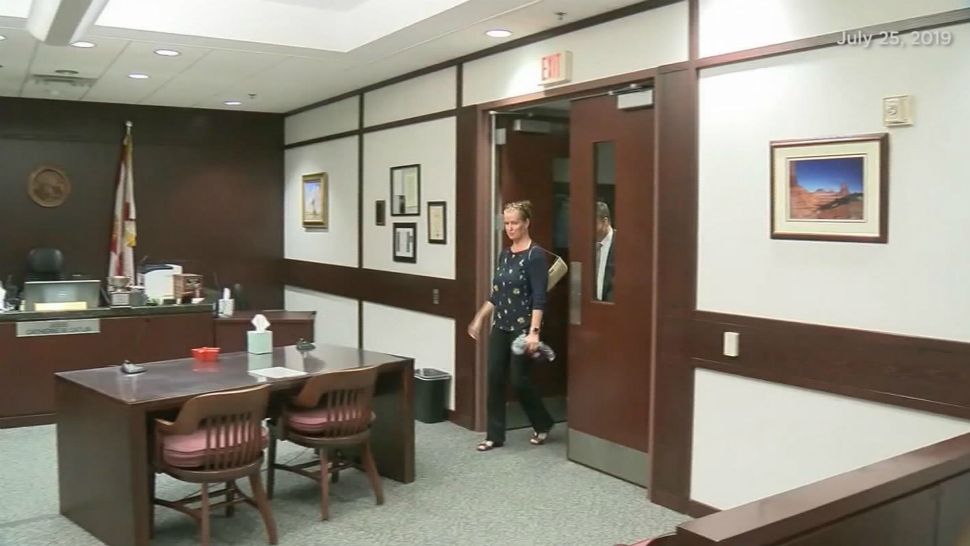 Rebecca Fierle walks into a court room in July 2019. (File)

Watchdog: In Short Hearing, Fierle Given Guardianship Over Patient

ORLANDO, Fla. — In less than three minutes, Steven Stryker was stripped of all legal authority to make decisions for himself.

Newly-obtained court audio from September 2018 shows when now-embattled professional guardian Rebecca Fierle was given full authority over Stryker, 75, of Brevard County, in a court hearing that at times included laughter. Stryker hadn't even met Fierle yet.

The hearing's audio is a stark contrast from the sharply-worded petition issued by Ninth Circuit Judge Janet Thorpe, this summer. She was the same judge who presided over that September 2018 hearing. It is not clear what records Thorpe may have reviewed before granting guardianship.

The petition began to reveal what many had tried for years to show: Florida’s guardianship system is in crisis.

State investigators blame Stryker’s death on Fierle, saying she ordered his feeding tube capped, and because Fierle placed a Do Not Resuscitate order against Stryker’s wishes, doctors could not provide lifesaving support.

"We had no time to prepare"

“Steve was very capable of making his own decisions,” said Linda Lanier, a close friend of Steven Stryker’s for nearly a decade.

In 2014, Stryker appointed Lanier his durable power of attorney and health care surrogate.

“That only ever came up because of medical issues,” Lanier said. “Steve was having a lot of issues with his esophagus.”

In June 2018 Stryker was Baker Acted to AdventHealth in Orlando, which Lanier said he then self-admitted for treatment.

“All of a sudden a sudden within a week of that treatment, I’m getting phone calls from Florida Hospital saying he’s got to go, he’s ready for discharge, but we can’t find a place for him unless there’s a guardian in place,” Lanier said.

Perplexed as to why a guardian was necessary, Lanier said the ultimate plan was for Stryker to live with her and her husband at their Brevard County home while Stryker received additional treatment at the VA Center.

It was on August 29, 2018 that Lanier says she was suddenly served with a notice of a hearing set for the following week: September 5, 2018.

“We had absolutely no time to prepare, Steven’s daughter Kimberly who lives in Virginia, and I were going nuts,” Lanier said.

The September 5, 2018 hearing was in response to AdventHealth’s petition to the court asking specifically for Rebecca Fierle to be appointed as Steven Stryker’s guardian.

Stryker’s family disputes AdventHealth’s claims in their petition that family could not be reached, and Steven Stryker was unable to make his own health care decisions.

“The decision was made for Rebecca to be assigned. She never contacted me, she never reached out, never asked for any information from me,” Steven’s daughter Kimberly told Spectrum News in July.

“Both of them told me, quote unquote, Judge Thorpe would not allow this to happen,” Lanier said.

What Happened at the Hearing

Wallace, Loftis, and Fierle are all heard identifying themselves at the beginning of the recording.

The hearing is supposed to set the status of Stryker’s temporary guardianship, but that quickly changes after Judge Thorpe announces she has possession of three reports from members of the court’s examining committee.

The audio transcript shows in full how the decision was made at that point to give Fierle permanent control over Stryker’s affairs, assets, and life.

“To hear it now, to hear the voices and the laughing, it’s horrifying,” Lanier said.

This is a notion that Lanier fiercely denies, saying she was never in an agreement for a permanent guardian to be appointed to oversee Stryker.

“Philip Wallace left me a voicemail the day of the hearing saying 'I told the judge quote unquote your wishes, or your position', he didn’t tell the position,” Lanier said. “My position was he [Stryker] needs to go to the VA.”

Lanier is adamant that Stryker’s court-appointed attorney, Lori Loftis, acted against his wishes by not allowing him to appear in court.

“Steve wanted to go to the hearing, he was ready," Lanier said. "And the hospital said no.”

Spectrum News made multiple efforts to seek comment from attorneys Philip Wallace and Lori Loftis, but messages were not returned.

A spokesperson for the Ninth Judicial Circuit, on behalf of Judge Thorpe, told Spectrum News, “…hearings vary in length depending on their scope, purpose, and many other factors. The Court cannot comment further while there is an ongoing court case and law enforcement investigation.”

The Need for Oversight

Stryker’s case has put much attention on the state’s guardianship program and what critics say are large voids of oversight.

Lanier points to the September 5 hearing’s audio transcript as evidence.

“Not too truthful, you know, I want to give the judge at least the benefit of the doubt, a little bit. She can only go by who comes in front of her bench,” Lanier said. “You’re counting on these individuals to bring you the right information, but how much due diligence are these judges doing, to make sure all of this is correct?”

Judge Thorpe first called out Fierle ahead of a July 11, 2019 emergency hearing. Judge Thorpe wrote in a petition that there was sufficient evidence to see Fierle’s “abuse of power” and a series of “conflicts of interest”.

Judge Thorpe ordered reporters to leave that July 11 hearing at the request of attorneys, and sealed the proceeding. However, a transcript of the hearing put into focus a series of actions that Judge Thorpe said Fierle took without court knowledge.

The hearing also raised questions about the judge’s oversight of local guardians when the July 11 hearing revealed the number of cases Fierle was assigned.

A judge can appoint a guardian to oversee the welfare of an individual, extending the legal right to make decisions on behalf of the person’s affairs, health care, and finances, with control of various bank accounts and other assets.

Judge Thorpe also revealed that same day that she found Fierle had not been bonded and insured since 2013, so should have been disqualified as a guardian in the past six years.

Additionally, Fierle had employees working for her at her Geriatric Management company, without reporting those employees to the state and ensuring they were going through required criminal and financial background checks.

On September 13, 2019, Judge Thorpe also filed an order permanently removing Rebecca Fierle from any appointment in Orange County as a professional guardian, based on the findings of a second investigation by the Orange County Comptroller’s Office, which again raised questions about Fierle’s handling of financial assets of her wards.

“At no time during this Judge’s tenure in the Probate Division for Orange County did Ms. Fierle bring an issue dealing with a “Do Not Resuscitate Order” to the Court’s attention, much less in the specific case which brought this issue to light,” Judge Thorpe wrote in the September 13, 2019 order. “This appears to be a direct violation of the Administrative Code and her duty to ensure a Ward’s best interests are paramount. This Court finds probable cause that Ms. Fierle violated the Florida Administrative Code and her general duty to perform in a Ward’s best interests.”

Judge Thorpe wrote in the above order that Fierle failed to disclose her financial relationship with AdventHealth.

“It is clear from the AdventHealth documents and the Comptroller’s Report that Ms. Fierle substantially benefited from her association with the facility, a service provider,” Judge Thorpe wrote in her September 13, 2019 order. “This Court finds probable cause that Ms. Fierle had a fiduciary duty to, at the very least, disclose her relationship with AdventHealth to the Court and the monies she was receiving prior to her appointment as guardian of any wards coming from AdventHealth. This information would have been extremely helpful to the Court in ensuring there was no conflict of interest in Ms. Fierle acting as either a temporary or permanent guardian of AdventHealth’s patients.”

“We were very troubled to see that there were duplicated bills sent to the hospital and to the court, and I think that is wrong,” Orange County Comptroller Phil Diamond told Spectrum News on September 12, after his office released their latest report.

A spokesman for AdventHealth responded to the Comptroller’s Report by saying they too were unaware of Fierle’s non-disclosure.

“We are both surprised and dismayed with the Orange County Comptroller’s findings that a professional guardian withheld information from the court and improperly billed the hospital and the court for resources to care for the most vulnerable in our community,” AdventHealth spokesman Bryan Malenius said. “The report from the Orange County Comptroller’s Office clearly highlights the importance of the state taking action. We are committed to lending our voice to reforming the guardianship system because it is core to our mission to ensure those who need this kind of help are cared for and protected.”

Florida Department of Law Enforcement and the Office of Florida Attorney General both have ongoing criminal investigations open, focused on Fierle.

Private Investigator Angela Woodhull told Spectrum News she tried to alert state and federal investigators years ago to Fierle’s alleged fraud and wrongdoing, to no avail.

Groups like Americans Against Abusive Probate Guardianship say Florida’s guardianship program has been fractured for years, like other states. They say much of the blame should be on judges who appoint guardianship with little actual oversight.

AAPG is hosting a community Town Hall on the issue of guardianships. The rescheduled town hall will be held November 4 from 3:00 p.m. to 7:30 p.m. at Marriott Orlando Airport Lakeside, located at 7499 August National Drive in Orlando. The town hall will begin with a screening of the documentary “The Guardians” followed by a Q & A session.