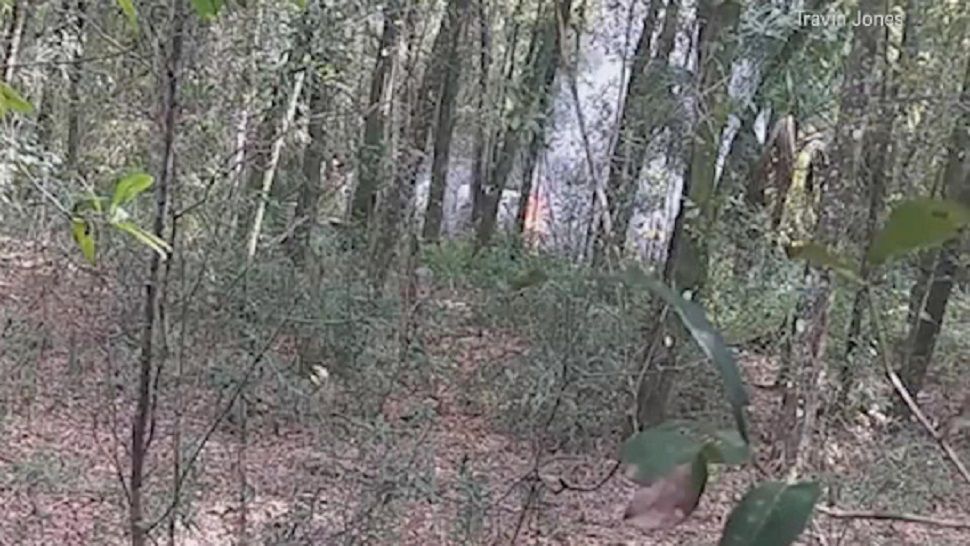 A small plane crashed in a wooded area of DeLand at about 4 p.m. Sunday. (Courtesy of Dennis Harriger)

DELAND, Fla. — An investigation into a plane crash that killed three people over the weekend in wooded area of DeLand is underway.

A National Transportation Safety Board​'s investigator-in-charge was due to the scene Monday morning.

According to the Volusia County Sheriff's Office, the twin-engine Cessna 421 crashed at about 4 p.m. Sunday near West New York Avenue and Grand Avenue and caught fire.

When first responders arrived at the scene, they found the three people with no pulse, deputies said. Several witnesses told authorities they saw the plane go down.

The Sheriff's Office on Monday released the identities of the victims: Armand Girouard, 27, of DeLand; Ernendro Philippe, 32, of Kissimmee; and Shawna Carbonaro, 34, of DeLand. Girouard was the pilot.

The Sheriff's Office released body camera footage and 911 audio on Monday and said the crash investigation has been turned over to the Federal Aviation Administration and the NTSB.

NTSB spokesperson Terry Williams stressed the agency is in the “fact-gathering stage." A preliminary report is expected within 10 days, outlining the facts gathered by the investigator. It will not draw any conclusions about possible causes of the crash -- that will be included in the NTSB’s final report, which could take months or more complete.

The NTSB investigator will continue to work at the crash site Tuesday. At some point soon, the wreckage will be moved to a more secure location as the investigation continues, Williams said.