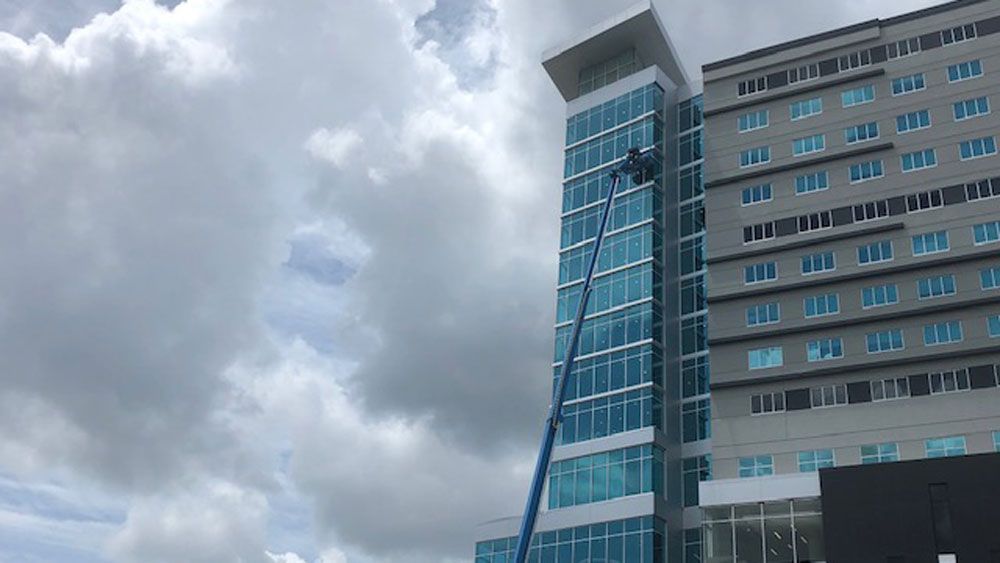 Cranes are still operating outside the UnionWest Building at UCF Downtown in Orlando, one week before classes start. (Julie Gargotta, Spectrum News)

ORLANDO, Fla. — School will soon be in session in downtown Orlando, as UCF Downtown, in partnership with Valencia College, opens its campus doors to students one week from Monday.

​“This is one of those transformative projects in the life of a city," said Thad Seymour Jr., UCF's interim president, about the new UCF Downtown campus.

Ahead of Monday's class time, the school took media on a tour of the new campus, located in downtown Orlando along Livingston Street. It is the cornerstone of the City Beautiful's Creative Village project, transforming a largely vacant property that waited for stakeholders to decide its potential for years.

As construction rumbled outside, with cranes dotting the air and barricades blocking thoroughfares, sleek classrooms sat awaiting students' arrival inside.

The 15-story UnionWest building, which houses 640 beds of student living, a recreational center, counseling offices and academic advising, is also home to a school in and of itself: the Walt Disney World Center for Culinary Arts and Hospitality at Valencia College Downtown.

“It’s a new facility, new equipment, new campus, new experience all together," said Gabriella Briones, a third year Valencia student who wants to one day own her own bakery.

The training center occupies three floors of the building and is outfitted with state-of-the-art equipment, according to the school, due in part to a $1.5 million donation from Walt Disney World Resort.

The theme park giant shared that the money was the single largest donation Disney made in 2019.

“Disney obviously has a very big hand in this school. It’s easier for us to get an internship there, there’s ways for us a job there, there’s a lot of opportunities and doors we can walk through because of Disney’s partnership with Valencia," said Briones.

Down the street, the Dr. Phillips Academic Commons are packed with classrooms and study centers; the tables and chairs are mobile and moveable, while lounge-like areas provide sockets.

“I do believe education is the biggest equalizer and that’s going to be right here," said Orlando City Commissioner Regina Hill.

"I have said many times, it's not about years or decades. This is about what we can do in core of an urban setting," said Seymour.