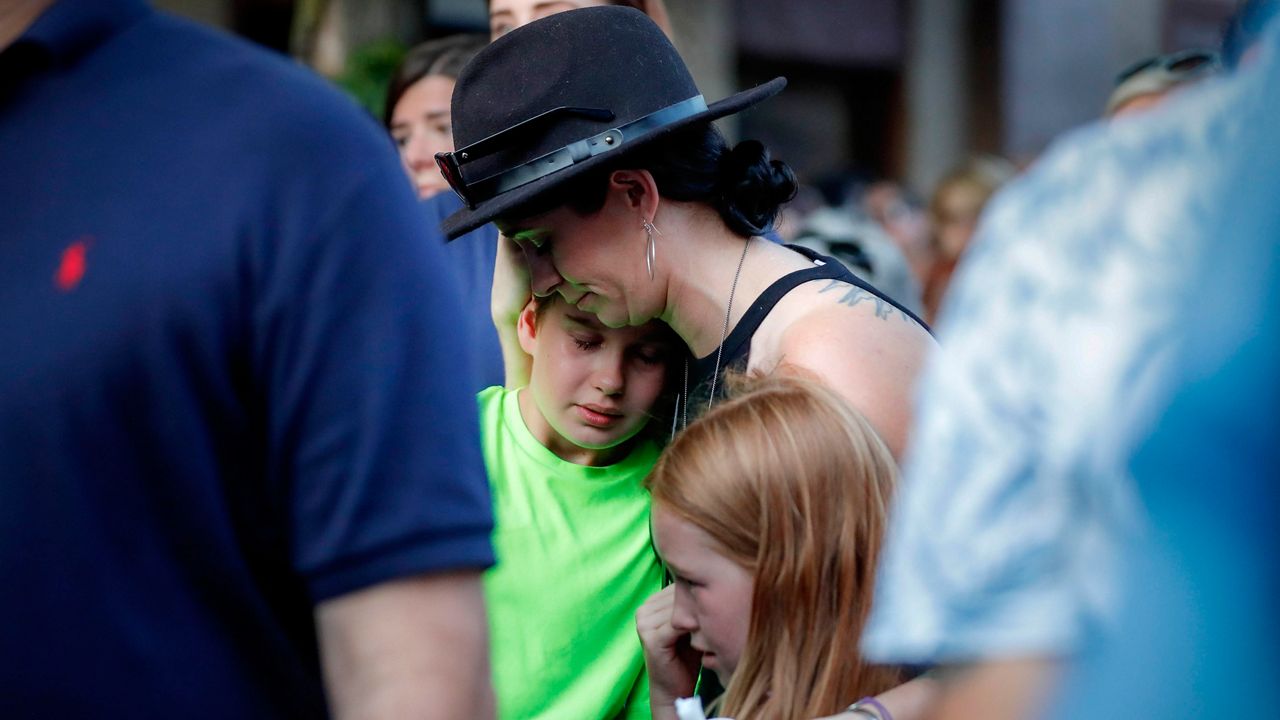 Mourners gather at the scene of a mass shooting during a vigil, Sunday, Aug. 4, 2019, in Dayton, Ohio. Multiple people in Ohio were killed in the second mass shooting in the U.S. in less than 24 hours. (AP Photo/John Minchillo)

ORLANDO, Fla. — Survivors of mass shootings in Florida are wrapping their heads around more tragedies — two deadly shootings in less than 24 hours.

At least 20 people in El Paso were killed Saturday in the mass shooting at a busy shopping area, according to Texas Gov. Greg Abbott. Hospital officials said another 26 people were injured and being treated.

Brandon Wolf survived the Pulse shooting in Orlando in 2016. His friend, Drew Leinonen, was one of 49 people murdered. He woke up to the news of the deadly shooting in Dayton, Ohio, just hours after the massacre in El Paso.

"I know what it's like to think about one day, your best friend being the best man at your wedding and the next day to be picking out flowers for that casket," Wolf said. "I know what that feels like. It is a pain I wouldn't wish on my worst enemy. And so my heart goes out to those who are grieving today."

Policy change, not thoughts.
Legislation, not prayers.
Action, not words.

El Paso deserved better. We all do.

Wolf is offering his condolences and support to the victims and survivors of the El Paso and Dayton shooting. But to everyone else, he wants more — he wants action.

"The really hard reality, the hard truth that people need to come to terms with, is there will be no legislative change until we change our legislators," he said.

By that, Wolf wants legislators who aren't influenced by gun lobbyists. And he wants more from politicians than thoughts and prayers.

Wolf has been petitioning for a ballot measure to ban assault weapons and high-capacity magazines in Florida.

Wolf is a co-founder of The Dru Project, in memory of Drew Leinonen. The nonprofit aims to spread love and promote gay-straight alliances. It has also given away tens of thousands of dollars in college scholarships.

"Orlando Mayor Dyer tweeted his support to El Paso Saturday, saying: "Truly heartbreaking to learn that yet another community has to endure great pain after a horrific, senseless act of violence."

Truly heartbreaking to learn that yet another community has to endure great pain after a horrific, senseless act of violence. Orlando sends its love and support to El Paso.

In February 2018, 17 people were killed in Parkland, Florida at Marjory Stoneman Douglas High School. Fred Guttenberg, who lost his daughter Jaime, tweeted about the need for political leaders to deal with the gun problem.

19 people killed. More families planning funerals or praying their lives ones survive. This country must face facts. WE HAVE A GUN PROBLEM. WE NEED ELECTED LEADERS WHO WILL DEAL WITH IT. To the families suffering today, I am here for you.https://t.co/yrDz2fRav9

Julie Gehring, of Orlando, is part of Moms Demand Action. The organization was formed after the Sandy Hook Elementary School shooting, where 20 children and six adults were killed in Connecticut.

Gehring is in Washington, D.C. with thousands of people who are pushing for tougher gun laws.

"Every mass shooting gathers attention," she told Spectrum News 13. "I have talked with so many mothers and fathers who have lost loved ones. It just takes one person to fundamentally change someone’s lives."

State Rep. Anna Eskamani in a news release said there will be a vigil Friday, August 9, to honor those who lost their lives in El Paso, Dayton, and other cities across the nation.

Gov. Ron DeSantis has also ordered flags to be flown at half-staff throughout Florida to honor the victims of the tragedies.

Sen. Rick Scott (R-Florida) tweeted his reaction to the El Paso and Dayton shootings, saying "white nationalism is a cancer on our country."

What we’ve seen in the last 24 hours in El Paso and Dayton is devastating. Hate and intolerance are corrupting too many of our young people.

White nationalism is a cancer on our country. We all stand united against this evil.

President Donald Trump also spoke publicly about the shootings for the first time before departing from the White House from Morristown Airport. He said, "Hate has no place in our country," and that he is "going to take care of it."

The President also authorized lowering all flags at half-staff at federal buildings in honor of those who were killed.

Today, I authorized the lowering of the flags to half-staff at all Federal Government buildings in honor of the victims of the tragedies in El Paso, Texas, and Dayton, Ohio....

Orlando Police Chief Orlando Rolon also weighed in on the mass shootings taking place within a hours of each other.

"It's very disturbing that these shooting happened 13 or 14 hours apart… the fact we lost 20 plus nine, maybe more," Rolon said.

The police chief says the city of Orlando has strong law enforcement presence here to try to protect its citizens. He reminds people as these shootings are unpredictable, we do need to be aware of our surroundings.

WATCH: Spectrum News 13 Reporter @MattMyNews13 spoke to @OrlandoPolice Chief Orlando Rolon about the deadly weekend shootings in Texas & Ohio. The police chief says amid the tragedy, we cannot allow attackers to "dictate how we live our lives." | https://t.co/m258iGt2KJ pic.twitter.com/vK4ZF8JB4r