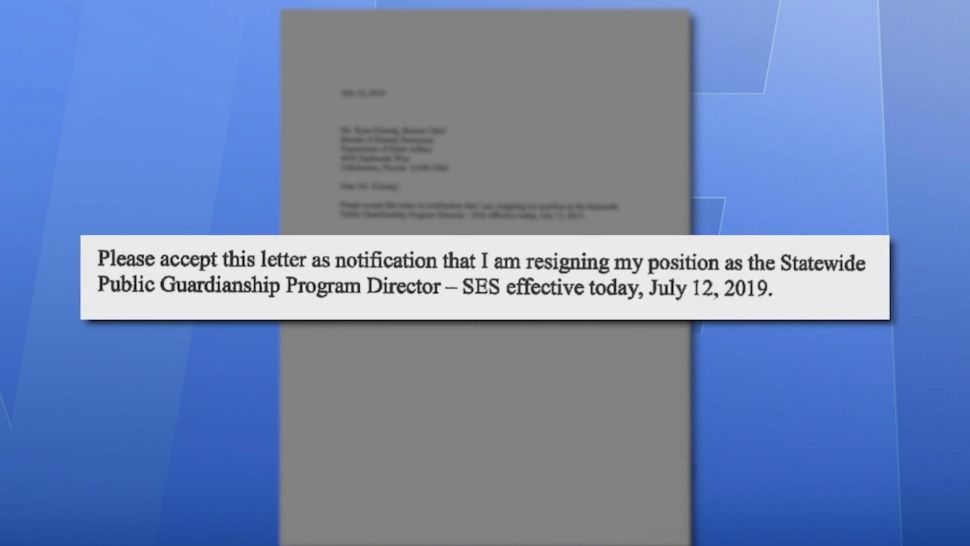 Carol Berkowitz stepped down as the executive director of the state's guardians office in a 1-sentence resignation letter July 12. (Spectrum News)

TALLAHASSEE, Fla. — The former executive director of the state's Office of Public & Professional Guardians resigned following the discovery of a backlog of more than 80 complaints against guardians, the secretary of the Department of Elder Affairs tells Spectrum News.

Secretary Richard Prudom said in a one-on-one interview Tuesday with Spectrum News Watchdog investigative reporter Curtis McCloud that mistakes were made, leading to the resignation of Carol Berkowitz, who stepped down July 12 in a one-sentence resignation letter.

"We have made mistakes in our office. We have not processed these complaints as efficiently and quickly as we need to," Prudom said. "We need to be more responsive to the complainants and their rights. I take personal responsibility for that."

Prudom said the backlog is no longer an issue, because he signed off on all of them over the past two weeks. He acknowledged that there is a problem within the system and is working with Gov. Ron DeSantis on a permanent solution.

"I’m really sorry. It should have never come to this, but now that it has ... we need to correct this," Prudom said.

Controversy over the state's guardianship program emerged after a Brevard County man, Steven Stryker, died in a Tampa hospital in May because his professional guardian had filed a "do-not-resuscitate" order against his family's wishes. The Florida Department of Law Enforcement is now investigating the guardian, Rebecca Fierle, who subsequently gave up guardianship of the hundreds of wards across the state in her care.

Prudom also said he's working with other state leaders on creating oversight and checks and balances for professional guardians.