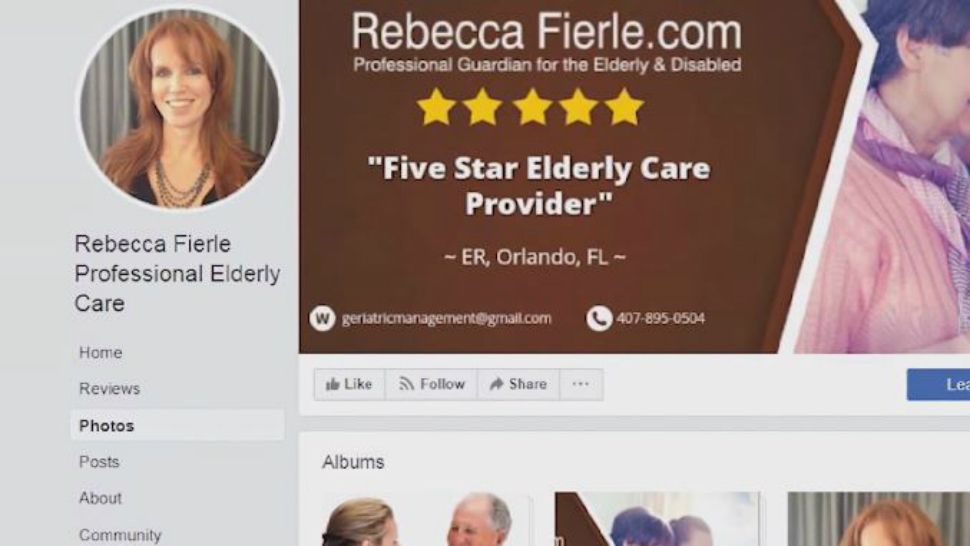 ORLANDO, Fla. — A county inquiry is raising more questions about an embattled professional guardian now at the center of a statewide criminal investigation.

A recent Orange County Comptroller’s investigation dives into how professional guardian Rebecca Fierle handled the assets and finances of her “wards,” seniors she was court appointed to care for.

Records show by early July, judges in 13 counties appointed Fierle to care for some 450 seniors. That’s in addition to Fierle petitioning to be appointed guardian in more than 400 cases since 2007 in Orange and Osceola counties alone.

Her staff won’t answer the door, except to state investigators.

But Fierle has submitted this letter saying she is resigning from all guardianship cases statewide @MyNews13 @BN9 https://t.co/mhqWHxAolW pic.twitter.com/DcHl5U9Pur

“We found the following problems prevalent through most, if not all of the cases,” the July report stated.

“She has a huge responsibility to protect these wards in her role as a professional guardian, and we see a number of instances where she was not protecting those wards,” said Wendy Kittleson, Deputy Director of County Audits at the Orange County Comptroller’s Office.

The findings of the comptroller’s July report allege Fierle failed to notify family of wards of court proceedings and asset sales.

“The Petition for Guardianship listed two individuals as next of kin,” the report states describing one specific case. “There is no evidence included in the file showing that the family members were notified of the guardianship case.”

The report continued, “The Clerk of Court filed an Observation that the next of kin were not noticed. To date, there is no evidence in the file that the family was ever noticed and the Observation was never complied with. In addition, the Ward had a joint bank account with one of the next of kin listed on the petition.”

“The Professional Guardian paid for vehicle repairs at Mickey’s Place for automotive repair, which is owned by a family member of the Professional Guardian,” the Orange County Comptroller report states. “The relationship to the owner has not been disclosed to the Court for evaluation of any conflicts of interest and ensure competitive pricing is obtained.”

In a third case, investigators say they found: “Conflicting services performed by Service Provider A for Inventory, Valuation, and Sale of personal property,” the report states. “Paid Service A $300 to prepare inventory and lists $0 value. The house contained multiple appliances, furniture, numerous jewelry items and four pages of various household items. In addition, a petition to abandon property was filed without noticing the next of kin.”

“There are a lot of instances in here where she is potentially not protecting the assets of the wards she is tasked with protecting,” Kittleson said.

State regulations require professional guardians to register annually with the Office of Public and Professional Guardians, providing a list of employees, all of whom are required to go through financial and criminal background checks.

“This is important because that wasn’t being done, so you have people that are having contact with wards going out and visiting them that aren’t having criminal background investigations,” Kittleson said.

The Orange County Comptroller’s investigation is now being used as part of a wider criminal investigation being led by agents in the Florida Department of Law Enforcement’s Orlando field office.

Fierle has been facing mounting criticism and questions since early July when a state investigation revealed she had placed “do not resuscitate” orders on many of her wards, often without their knowledge or against their wishes.

Multiple judges have since removed or accepted Fierle’s resignation in more than 100 guardianship cases since early July.

Ninth Circuit Judicial Court Judge Janet Thorpe wrote in a July 3 motion that Fierle had “abused her powers” in part by filing DNRs without family or court knowledge and permission, and failing to disclose to the court various conflicts of interest.

With the threat of being removed, Fierle’s attorneys filed voluntarily resignation in 98 cases in Orange and Osceola Counties. Similar filings have since been made in Seminole, Volusia, Pinellas, and Hillsborough counties where judges are also moving quick to remove Fierle as a guardian and revoking any DNR order she may have filed.

Some families of Fierle’s now former wards are now pushing for criminal charges to be filed.

“I definitely blame that choice she made on his death for sure,” said Kim Stryker, daughter of Fierle’s former ward Steven Stryker.

Stryker said her father had a chronic condition called esophageal stricture, which would often mean his throat muscles would get too tight leading sometimes to choking.

“(Fierle) ordered his feeding tube be capped the week before he died, so he went three or four days at least as far as I know without being able to eat safely before Monday, May 13, 2019, when he choked and stopped breaking, and because of the DNR, they were not able to resuscitate him,” Stryker said.

Stryker said she wants to see a criminal investigator into Fierle’s actions.

“I think what she did was criminal,” Stryker said. “These guardians have way too much power over vulnerable people and they need to be safe.”

A state investigation determined “Fierle’s decision to place a DNR order against the Ward’s stated wishes constituted the removal of care necessary to maintain the Ward’s physical health.”

“There’s an argument that I think the state would look into, and by state I mean criminal investigation, that these are intentionally killings,” Haas said. “There’s also argument as pointed out in the investigation that this is what’s referred to as aggravated manslaughter by culpable negligence or reckless disregard for human life, and that there could be a case looked into.”

Fierle is not facing criminal charges at this time.

Fierle and her attorneys have not returned repeated requests for comment.

Embattled professional guardian Rebecca Fierle’s employees won’t answer when we knock - but they did when this state investigator showed up to the door. @MyNews13 @BN9 https://t.co/YGOZ07qrAB pic.twitter.com/cmaWurZw7U

A spokesperson for Attorney General Ashley Moody told Spectrum News in an email that that their office is “fully aware of the matter, and due to its ongoing nature, we cannot comment further at this time.”

Moody’s spokesperson added they could not confirm nor deny whether an active criminal investigation was open.

“I’m afraid there are more people like her out there in the state of Florida who are not being kept tabs on,” Kim Stryker said, adding that she believes there needs to be a “top to bottom” review of Florida’s guardianship program.

“We are obviously concerned about some of the reports,” DeSantis said. “Secretary Purdom is pursuing it, and I told him to pursue it vigorously.”

DeSantis also said that his team will look at legislative means to ensure more oversight of the state’s guardianship program.

“Protecting vulnerable adults from harm is our utmost priority,” Florida Department of Elder Affairs Secretary Richard Prudom said in a statement. “Upon receiving these troubling complaints against Ms. Fierle, we immediately forwarded it for investigation. We are continuing to do everything possible under the law to hold Ms. Fierle accountable for her actions.”

The state’s guardianship program itself is now facing mounting questions.

It was revealed this week that one day after Judge Thorpe removed Fierle from 98 cases in Orange and Osceola counties, Carol Berkowitz, the director overseeing Florida’s 550 professional guardians, abruptly resigned. Her one-sentence resignation letter didn’t give a reason for her departure.