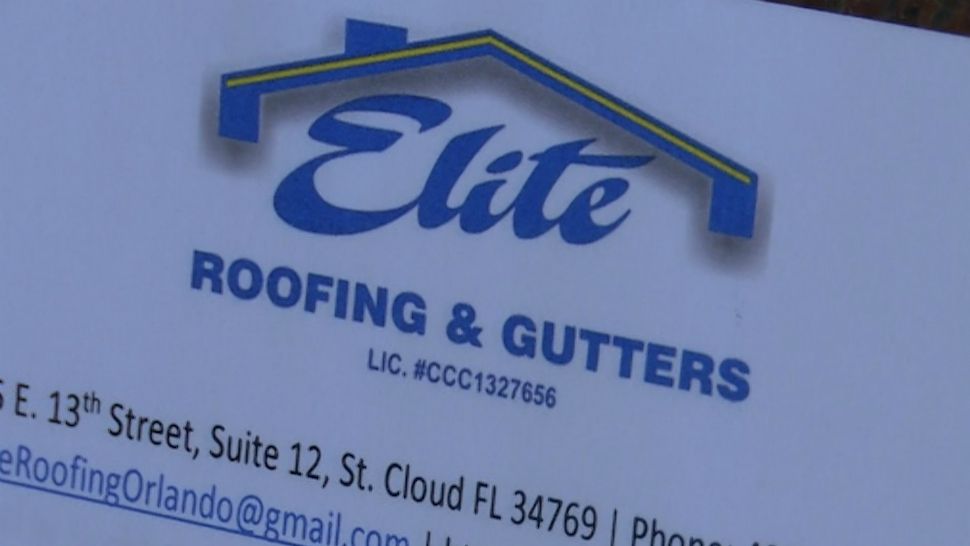 Elite Roofing and Gutters is accused of scamming a St. Cloud woman who wanted work done on her roof in 2018. (File)

ORLANDO, Fla. — A Florida roofing company owner is under investigation for allegedly scamming people, from Osceola County up to the Panhandle — but he's still licensed by the state and allowed to pull permits.

Our Spectrum News 13 Watchdog investigation found that Beville is accused of engaging in improper, and in some cases, criminal conduct against individuals and companies over the past 11 years.

In 2018, Carolyn Watson and her husband bought their dream house in Crystal River. In need of a new roof, the couple called Elite Roofing and Gutters Incorporated, giving Beville a deposit of $6,637 — half the total cost.

“They told us six to eight weeks was the waiting time, and (in) the eighth week, I said, 'I want an update',” Watson said.

Adding to an already stressful situation, Watson’s ailing father had just moved in when the roof began to leak.

Twelve weeks after handing over their deposit, Watson says they learned that Beville had never even ordered materials.

“That’s when I really got sick to my stomach, knowing there is seriously something serious, and that I was probably not going to get my money back,” Watson said.

It's an experience MaryAnn Crocker knows all too well.

“I am heartbroken that someone could do this to an invalid lady," said Crocker, who is legally blind, at the time.

It was after Watson saw our story with Crocker, she realized she wasn’t alone and filed a complaint.

“Then I realized something is really wrong,” she said.

After investigating claims by Watson and another person, the Citrus County Sheriff’s Office arrested Beville in April 2019, charging him with two felony counts of grand theft. The cases are now going through the criminal court system.

A third investigation is still ongoing, although no charges have been filed. The Florida Department of Law Enforcement is now conducting a statewide investigation.

A History of Legal Trouble

We found that Beville’s legal troubles extend beyond customers.

Beville and his company are being sued for business loans totaling hundreds of thousands of dollars.

“Speaking with Det. Ramos, he stated that Mr. Beville seemed almost shocked that it kind of caught up with him,” said Sgt. Matthew Baird with the Citrus County Sheriff’s Major Crimes Unit.

Florida Department of State records show that Beville started his business in 2006 as Top Knotch Roofing.

In 2009, he changed his company’s name to A Elite Roofing of Citrus County, and again in 2017 to Elite Roofing and Gutters Incorporated.

We found lawsuits against all three companies spanning the past 11 years.

“I believe he would change the names so he could continue his fraudulent activity,” Baird said.

When looking into Elite Roofing and Gutters's history, we found the company had an “A” rating on the Better Business Bureau website.

We asked the BBB whether they were aware of the recent felony charges against Beville.

BBB of Greater Central Florida President and CEO Holly Salmons says: “Only News 13 contacted us about this business.”

Afterward, the BBB removed the “A” rating, stating Beville had also failed to pay his dues. We also notified the BBB that Elite Roofing was continuing to display its now-invalid BBB accreditation on its front door.

We tried several times to speak with Beville and his attorney, without success. And when we arrived at Beville’s June 4 status conference, neither he nor his attorney showed up, having waived his appearance.

Citrus County Judge Richard Howard issued a warning to the attorney filling in.

“No more waivers of appearance. He has to be here next time,” Howard said.

Beville is still licensed by the state and allowed to pull permits for future construction projects.

The Florida Department of Business and Professional Regulations is the agency that approves business licenses. A spokesperson said the agency is investigating Elite Roofing and Gutters but declined to give specifics.

A Citrus County spokeswoman said that, because Beville has not been convicted of a crime, he can continue pulling permits.

Watson wants that to stop.

Beville is due back in court July 30 and is required to appear.

FDLE and Citrus County Sheriff’s Office says if you think you are a victim, call them.