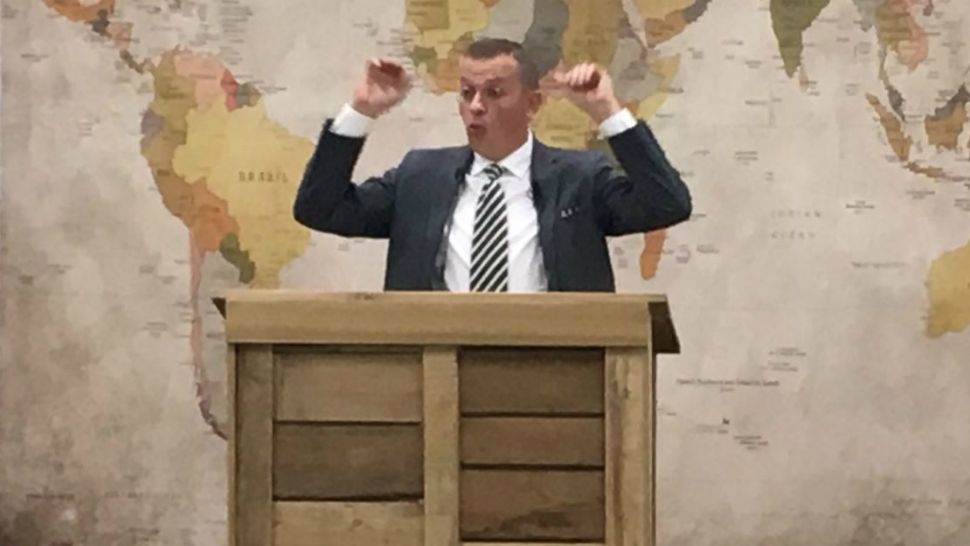 Pastor Patrick Boyle of Revival Baptist Church says of the gay community and its supporters: "I don’t have any qualms with saying I hate them." (Spectrum News)

CLERMONT, Fla. — Amid Pride Month for the LGBTQ community, a Clermont church is among several hosting a "Make America Straight Again" conference in Central Florida this weekend.

"They are beyond reach, the Sodomites," said Pastor Patrick Boyle of Revival Baptist Church, off U.S. 27. "We are not trying to reach them. We are trying to warn society that if we embrace that, you are going to lose your children ... The schools are telling them it's an alternative lifestyle choice."

In the past few weeks, Boyle says he has received thousands of emails, calls, and messages on his church’s Facebook group from those who support the LGBTQ community.

He says those who call him extreme are calling the kettle black.

"So it's interesting!" Boyle said. "They are going to be out there protesting love, love, love — yet if we can make a compilation of the voicemails from these crowds, it's all but love ... They hate us, and I don’t have any qualms with saying I hate them."

Fernanda Figueroa, though, doesn’t agree with Boyle. Figueroa is in the transitioning process and has her own idea on how God and His message can be interpreted.

"You cannot use the Lord's name to slander a community for your homophobic or transgender agenda," Figueroa said.

Another Central Florida person of faith, Pastor Terence Gray of Saint Mark AME Church in Orlando, said events like this are pushing people away from the church, because it's forcing people to fit a certain mold.

"The scripture says, 'Let them grow together in the day of harvest. I'll do the separating.' If that is God's message, then let's do our job to show God's witness and God's purpose to the people without trying to send somebody to Hell, without trying to tell somebody you have to do it my way," Gray said.

Boyle is expecting some type of protest at his conference, which begins Friday, but he said that won’t sway him from changing his views at all.

The time and location for the conference will not be released by the church until Friday afternoon.