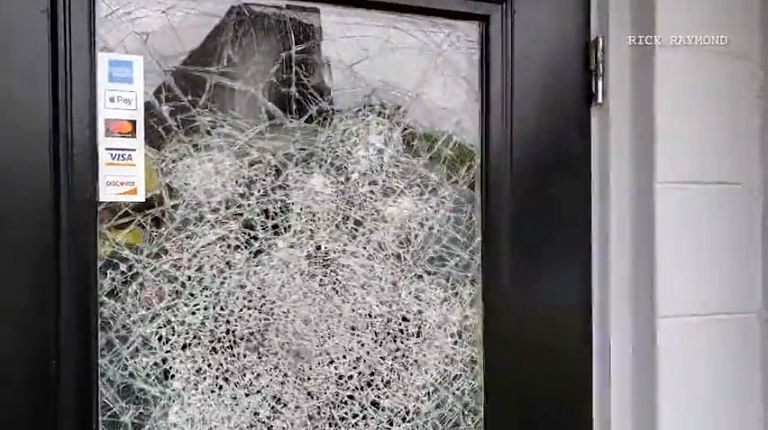 DAYTONA BEACH, Fla. — A pair of would be burglars attempted to break in to Daytona Beach Spy Shop of all places. The whole ordeal was caught by the store’s many surveillance cameras.

Private Investigator Rick Raymond, the store’s owner, said this is the first time anyone has attempted to break in to the store, which sells so many gadgets for catching people doing things they shouldn’t.

“They’re not astronauts, I can tell you that. These guys are not bright at all,” Raymond said.

According to police, two people in a silver Chevy Camaro dressed in masks pulled up the business early Sunday morning.

One of the suspects, with his face covered, attempted to break the front door window with a hammer.

“I started counting the strikes to the window with this hammer, and he got to 30-something strikes —had to have been tired out turned. Like they were going to leave, and then he came back and hit it another 20 odd (times). So it was a total of 56 full-on hits with this hammer,” said Raymond as he watched security footage of the attempted burglary.

The glass, which Raymond said is hurricane-resistant, never gave way.

“That was a solid piece of polymer, about a half and inch thick, with cracked glass embedded in it, but there is not one hole in that window at all,” Raymond said.

Raymond believes the suspects did not think their actions all the way through.

“You know we are going to have pretty good security at a spy shop, you know you’re going to be on video, and then had they made it inside, that’s when their day would have gotten ​a lot worse,” he said.

Raymond said he is happy that he spent the extra money on the hurricane resistant glass and plans to upgrade to even stronger glass.