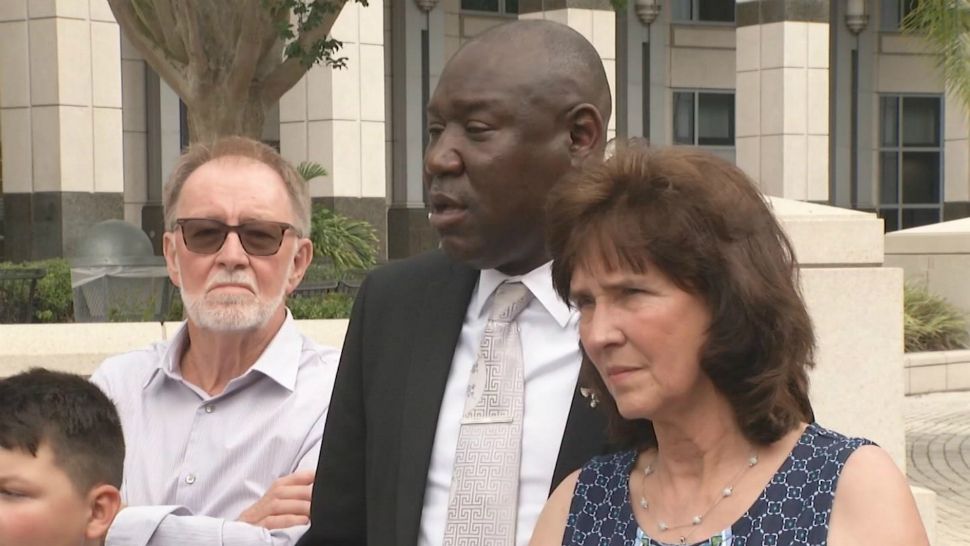 Hester Burkhalter, 69, of Hickory, North Carolina (right) and attorney Ben Crump speak during a news conference Tuesday at the Orange County Courthouse in Orlando. Burkhalter would like a public apology from Disney World and the Orange County Sheriff's Office over her CBD oil arrest last month. (Spectrum News)

ORLANDO, Fla. — Attorneys for a great-grandmother arrested in April at Walt Disney World on Tuesday demanded a public apology from the company as well as Orange County Sheriff’s Office.

Hester Burkhalter, 69 of Hickory, North Carolina, was arrested April 15 outside the Magic Kingdom, on what she said was the third day of a weeklong vacation.

Disney security found a small bottle of cannabis-based CBD oil in Burkhalter’s purse as she was going through guest security screening. Security then called a nearby Orange County Sheriff’s deputy.

"She had her small purse. She laid it on the security table, (and) they looked at the content. She had a bottle of cannabis oil, CBD oil, that was prescribed by her doctor for her chronic arthritis," said nationally known civil-rights attorney Benjamin Crump, who is representing Burkhalter and her family, during a news conference at the Orange County Courthouse in Orlando.

She was trespassed from Disney World, jailed for about 12 hours, charged with possession of hashish, and fined $2,000.

“They treated her like a common criminal,” Crump said.

Attorneys for Burkhalter dismissed the assertion that her CBD oil contained THC — the ingredient responsible for marijuana's "high" — saying it is widely known that field presumptive tests are often inaccurate.

Burkhalter maintains she has a prescription for the CBD oil, issued by her doctor, but she said the deputy refused to listen to her. The Sheriff's Office arrest report makes no mention of a prescription or whether a deputy asked for proof.

“If they would have just exercised common decency and pulled her to the side and said, 'What is this?...' but that’s not what happened,” attorney Michele Rayner said.

Is CBD oil legal in Florida?

“(The bill) decriminalized the use of CBD in all 50 states, in theory, but until the state implements a law for the growth of hemp and the extraction of CBD oil from the hemp, you’re dealing in a gray area,” Rosado said.

If you have a medical marijuana card from your doctor, you can legally have CBD oil in Florida, because Florida’s current laws don’t distinguish between CBD oil and marijuana.

“You have to have your medical cannibis card, which is issued by the Florida Department of Health and Office of Medical Marijuana use,” Rosado said.

Attorneys for Burkhalter said the deputy also refused to provide medical assistance when she complained of not feeling well.

“She started vomiting, and he didn’t offer her any medical relief," Crump said. "Not only did he treat her like a common criminal, he treated her like somebody that was not worthy of dignity and respect of a cherished grandmother."

Attorney Jennifer Synnamon said Tuesday that about 12 hours after Burkhalter was arrested at the Magic Kingdom, the State’s Attorney Office decided to drop charges, finding no basis for a case.

Calling Burkhalter’s arrest unlawful and unethical, the attorneys said they will sue Walt Disney World and the Orange County Sheriff’s Office if the two entities don't offer a public apology.

A spokeswoman for Walt Disney World told Spectrum News that the issue is a law enforcement matter, adding that the trespass order barring Burkhalter from Disney property had also been lifted.

The Sheriff’s Office said in a statement that it thinks Burkhalter was arrested lawfully, adding, “…although CBD oil is illegal without a prescription, our top drug enforcement priority and focus at the Orange County Sheriff’s Office is to get deadly drugs, like heroin, and fentanyl, off the streets of our community.”

Two weeks after Burkhalter’s arrest, the Sheriff's Office issued new guidance for deputies outlining the state’s law on CBD. The guidance says that “…because of the confusion surrounding CBD, deputies are encouraged to consult on-call Narcotics or Legal prior to effectuating an arrest or seizing CBD.”