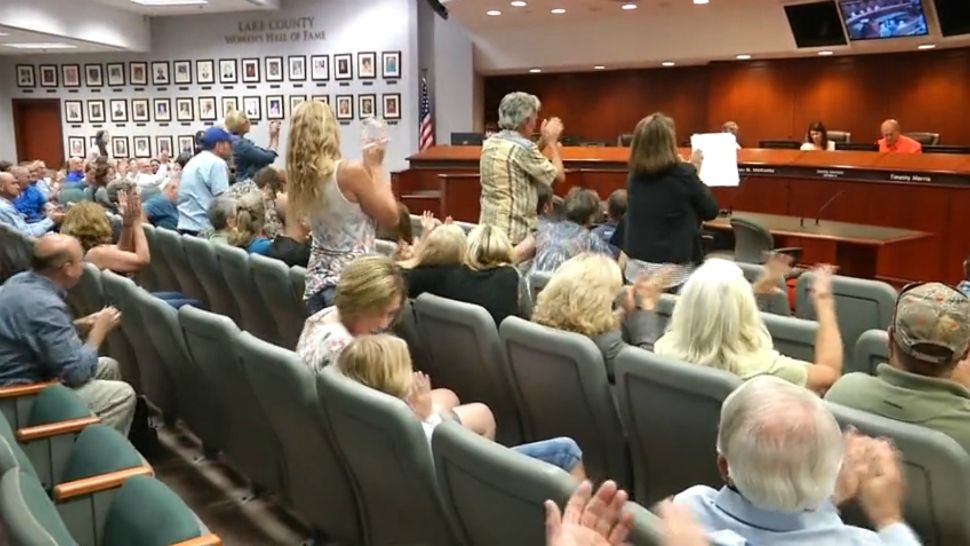 Lake County residents stand and applaud during a county zoning board meeting Wednesday in which board members voted on the construction of a company's building that would house migrant workers. (Dave DeJohn/Spectrum News 13)

TAVARES, Fla. — A plan by a Lake County farm to bring in and house up to 200 migrant workers in a dormitory-style building was turned down during a contentious board meeting Wednesday.

The county zoning board voted 4-1 against the construction of the dorm, which would house Mexican laborers for a company called Liner Source.

Seats at the meeting were packed with residents who opposed the building, while representatives from Liner Source were on hand to respond to their concerns, many about safety.

Most of the meeting attendees agreed the proposal would violate the “one home, one family, per 5-acre” zoning requirement. But what the Liner Source Company is after is a “conditional use permit."

NOT IN MY BACKYARD! Residents are boiling mad about a proposed migrant camp going up in a rural area in Lake County. Find out the results at 5pm on Spectrum News 13 at 5pm... and at 10pm for a longer version. @MyNews13 pic.twitter.com/fOiTecZYW9

The company wanted to put up a dormitory style building that would house about 200 immigrants working under the H-2A visa program. That program allows them to work legally in the United States.

"Liner Source is going to use something called E-Verify through Homeland Security. E-Verify is simply HR verifying. It does no background checking and no criminal checking," resident Jenny Rennard said. "They offer a person a job, the person accepts, and in three days, they use something called E-Verify, which just says can they or can't they work."

Representatives from Liner Source did not wish to comment on the outcome of the meeting.

The company plans to appeal to the Lake County Commission, which will next take up the issue May 21.