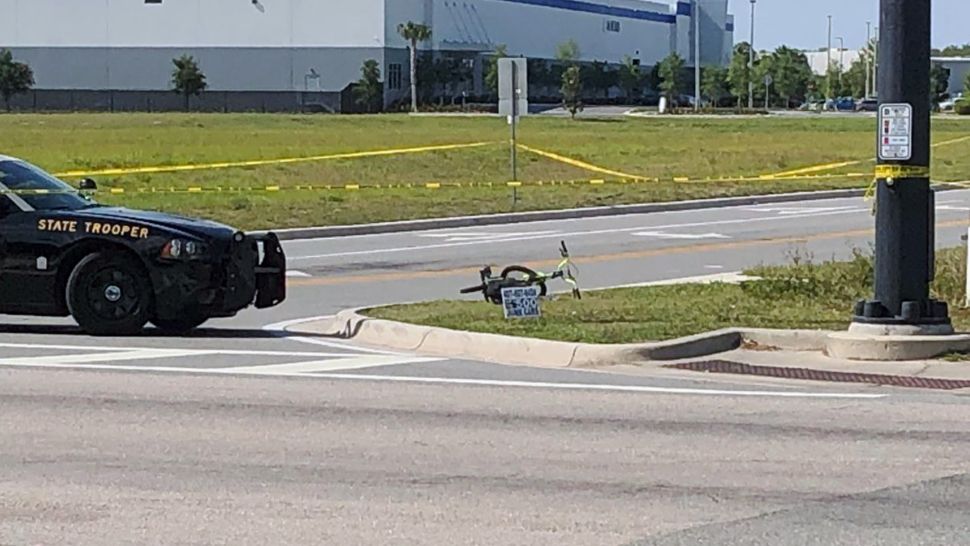 The Florida Highway Patrol stated Kevin Pope, 10, had just left Wetherbee Elementary School and was riding his bike in the crosswalk when a semitractor trailer struck him. (Eric Mock/Spectrum News 13)

ORANGE COUNTY, Fla. — Authorities have released the name of the 10-year-boy who was struck and killed by a semi truck while riding his bike home from Wetherbee Elementary School on Wednesday.

Investigators are still searching for the semi driver who hit 10-year-old Kevin Pope.

We’ve learned the young boy who was hit and killed was riding his bike home from Wetherbee Elementary school. @FHPOrlando says the truck driver might not have known he hit the boy, they don’t know if charges will be filed against the driver once they find him/her @MyNews13 pic.twitter.com/nZRHTIntYc

The Florida Highway Patrol says the crash happened just down the road from Wetherbee Elementary School, at the intersection of Landstar Boulevard and Wetherbee Road.

Troopers say that the boy had just left school and was riding his bike in the crosswalk. He had the "walk" signal, they said.

A semi had a green light and was turning when the right side of the truck's trailer hit the boy, with its right rear tires running him over, investigators said.

The semi did not stop.

Pope was taken to the Arnold Palmer Hospital for Children, where he died.

Safety at the intersection

According to Florida Highway Patrol, there is at least one crossing guard on the opposite side of the intersection of Wetherbee and Landstar Boulevard.

The Orange County Sheriff's Office is responsible for deciding where these guards go. A spokesperson told Spectrum News 13 that they have asked Orange County Traffic Engineering to reassess the intersection to determine if additional crossing guards are needed.

Statistics from FHP show since January 2017, there have been 24 crashes at the intersection -- none of those were fatal.

On Thursday morning, Smith walked his son to school.

“This morning I had to talk to him, and pray with him, because he didn't want to come to school today,” Smith said.

Neighbors say this area of South Orange County continues to grow, and traffic is dangerous.

"It's really busy," said Zafira Jameer, who lives nearby. "It's gotten even busier, because I live in Wetherbee for 16 years and I've never seen traffic so bad, and everybody is in a hurry.”

Search for the driver

Florida Highway Patrol has canvased the surrounding industrial area, checking about 200 trucks for the driver responsible for this fatal accident.

Troopers said the semi was white with black or blue lettering on the cab, with a white trailer.

They said it's unclear whether the driver knew they hit the child, but they need to find that person.

FHP says charges are pending. If you have any information, troopers ask that you call FHP immediately.

Besides grief counselors, administrators are encouraging parents to talk to their children about what happened.

A GoFundMe account has been set up for the family, with a $5,000 goal.

This Gofundme.com site is not managed by Spectrum News 13. For more information on how the site works and the rules, visit www.gofundme.com/safety.