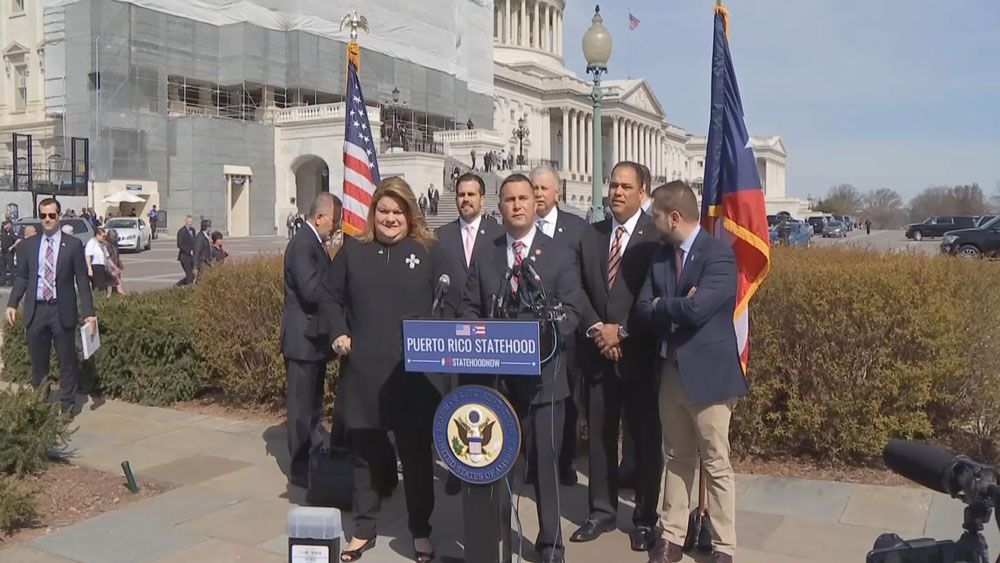 WASHINGTON — A bipartisan group of lawmakers in Washington are pushing a bill to make Puerto Rico the 51st state.

The bill in the U.S. House was unveiled Tuesday by Reps. Darren Soto, D-Kissimmee, and Jenniffer Gonzalez-Colón, R-Puerto Rico.

“I have come to the conclusion that the current status is certainly untenable anymore,” Rep. Soto said in an interview with Spectrum News.

This is the first bill that would directly make Puerto Rico a state without any conditions. If this measure becomes law, it would take effect no more than 90 days after the bill’s passage.

“Puerto Ricans need their own U.S. Senators and representatives to fight for their needs and hold Washington accountable,” Soto said

This measure would grant the island congressional representation and stronger influence in Presidential elections. If passed, it would happen without a referendum from Puerto Rican voters.

“3.3 million U.S. Citizens are disenfranchised, don’t have the power to vote, don’t get equal resources and are treated with injustice that is simply unacceptable,” said Gov. Ricardo Rosselló, (D) Puerto Rico.

In the past seven years, Puerto Rican voters have voted to become a state twice. But those referendums were purely symbolic, because any change requires congressional approval.

While Puerto Rico does have a representative, Gonzalez-Colón, she cannot vote on final bills, even if they affect Puerto Rico.

.@RepJenniffer: “This is not a right or left issue, this is a civil rights issue.” pic.twitter.com/zLWRqFEj4d

“I am supportive of following the will of the people of Puerto Rico. I’ve been working with Jenniffer González-Colón but on that bill - Darren Soto didn’t call me,” said Sen. Rick Scott (R) Florida in response to a question from Spectrum News, asking if he supported Soto’s bill.

The island also does not get proper representation in Congress, compared to other states. Puerto Rico is home to roughly 3.2 million people. That's larger than the populations of 21 other states.

This effort comes as President Trump’s public feud with Puerto Rican leaders intensified this week after he complained about the amount of disaster relief going to the island during a closed door meeting with Republicans.

“Let’s cease the insults and the attacks. We are not your political adversaries, Mr. President, we are your U.S. citizens.” Rosselló said.

Partisan clashes over aid continues to hold up progress on a $13.45 billion disaster relief package. Rep. Soto says these disagreements would be nonexistent if Puerto Rico was properly represented.

“As we speak, the Senate is waging a large debate over the SNAP program and the funding for it for Puerto Rico," Soto said. "There wouldn’t even be a debate over that if Puerto Rico was a state because they would already be getting these funds under snap. So you see the vulnerability the island has when it’s treated differently."

.@ricardorossello: “Only really after the hurricane, did the nation start to see the injustice.” pic.twitter.com/WL0DNCAr4I

"Six-hundred million dollars that is intent helping needy hungry families, predominantly children, are held up in a political debate in the Senate because the current status allows that to happen," he said.

Currently this measure does not have a companion bill in the U.S. Senate. The bill is likely to gain enough support in the House, but it has an uncertain future in the Republican-controlled Senate.

The President has said he does not support statehood for Puerto Rico in the past.