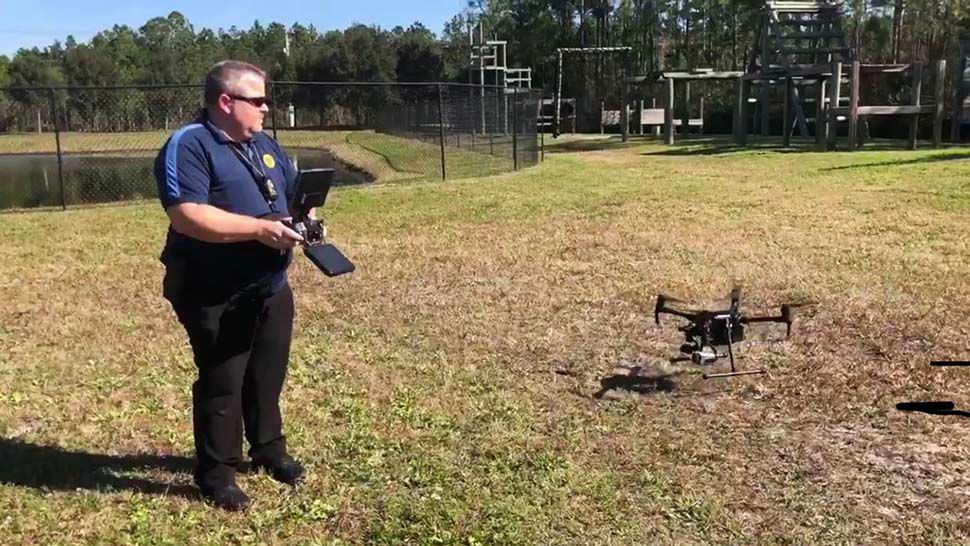 The Daytona Beach Police Department will be using drones during the Daytona 500 as part of an added security measure. (Nicole Griffin/Spectrum News 13)

Daytona Beach Police to Use Drones During Daytona 500

DAYTONA BEACH, Fla. -- For the first time, Daytona Beach Police will be using drones as part of their Daytona 500 security measures.

Four FAA-certified officers, who took drone courses at Embrey Riddle, will be flying the machines.

"Daytona hosts more large events than anywhere else I can think of in Florida, said Sgt. Tim Ehrenkaufer, of Daytona Beach Police Department's drone pilots. "Between Bike Week, two races, Biketoberfest, Spring Break, and we have the truck event that comes in every year, this is one of the reasons we wanted them. We need to get up in the air and see where the crowds are at."

@DBCops1 are getting ready for the #Daytona500 They’re using #drones for the first time this year to keep crowds safe and catch bad guys in the act! I’ve got the full story for you coming up on @MyNews13 pic.twitter.com/5dTkpovPik

The drones are relatively new to the department. The City Commissioners approved the purchase of four drones for $76,000 last April. But the taxpayers are not the ones footing the bill.

"We were able to tap in to the drug forfeiture money, which of course costs tax payers nothing, because it's money we took from dopers and used that money to buy this equipment," Ehrenkaufer said.

Primarily, the drones will be used for keeping an eye on traffic and crowds.

"We'll be able to give real time reports beck to our command staff of where the crowds are forming, where the parking lots are full, where we can start shifting people to alleviate some of the traffic concerns," Ehrenkaufer said.

But they also plan to use them to watch for crime and any other threats that could pop up.

"Sometimes there are suspicious packages left outside of the race track itself, out in the parking lots in the fields, roadways, said Ehrenkaufer. "This gives us the opportunity  from a large distance to zoom in, look at this package and determine if this could be some kind of explosive device or jus somebody left their cooler laying there."

According to Ehrenkaufer, the department has waited seven years to use drones at the race, and now that they can, NASCAR fans should feel more secure.

"With the shootings that have been happening, the problems that have been going on throughout the whole country, I think one more added step of security definitely can't hurt to make people feel better," he said.