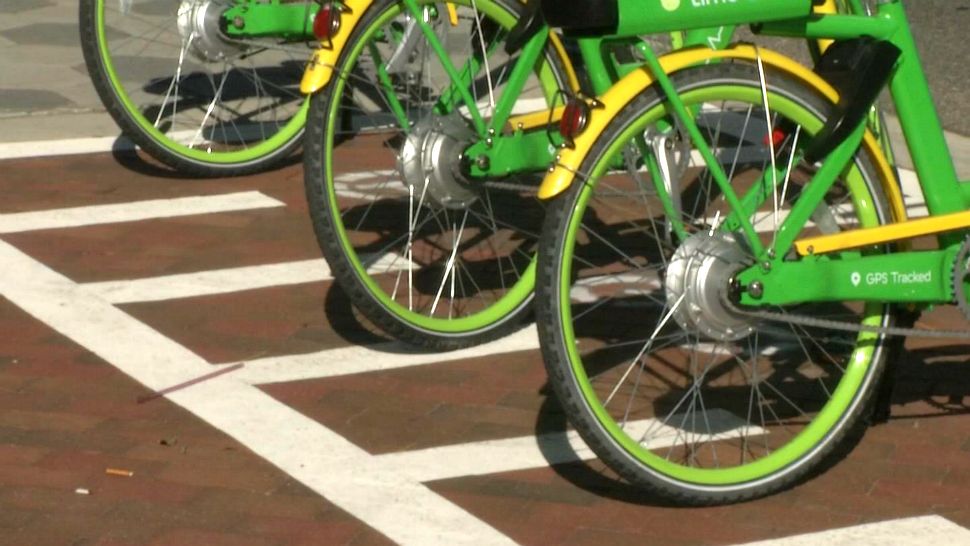 Lime bikes are being tested in downtown Orlando for a 1-year trial period. They can be pedaled but also have an electric motor. (Spectrum News 13)

Orlando Creates Marked Spots for Lime Bikes After Some Complaints

ORLANDO, Fla. — If you spend any time in downtown Orlando these days, you’ll probably notice lots of green "Lime" bikes, which have become a popular way to get around the city. But the bikes haven't come without complaints.

Danny Chopra says he noticed something a little strange in his front yard.

"I walked out, and I see two bikes sitting there just randomly," Chopra said.

Someone left two Lime bikes on the corner in front of his home, just south of downtown Orlando.

"That’s kind of ridiculous," he said, "It's weird when you drive by, and it’s in front of my house."

Unlike Orange-colored "Juice" bikes that people have already used in Orlando for a while now, the Lime bikes have a motor-assist that can power the bikes to up to almost 15 mph. They can also be just pedaled.

But the other big difference between the two is that the Lime bikes are "dockless" — they don't need to be returned to the same spot where they're picked up and can be left anywhere. They operate via an app and are GPS-tracked.

Lime is operating its bikes in Orlando on a one-year trial period that started late last year.

"Typically, the calls we’ve been receiving are improperly parked bicycles, and we notify the vendor and they take care of it very quickly," said F.J. Flynn, the deputy director of City of Orlando Transportation.

Lime said if it gets complaints, it works to address them within a couple of hours.

"Maintenance is going to be an issue, because they are so wildly popular, but I think the company is a great success, and they’re only going to get better," said Brooke Jordan, a Lime bike rider.

Jordan says she enjoyed finding bikes left in her neighborhood.

"They don’t stay for long in the residential areas," Jordan said. "I can understand why it would be a little frustrating for some folks, but not so much for me, because it’s worked out well in my favor. We picked up three bikes in the neighborhood and rolled down to Lake Eola."

Chopra didn’t file a complaint. He said the bikes in his front yard were there for more than a day.

"I figured they’d be at a stand or something," Chopra said. "I just think it’s a little awkward. If I wasn’t educated on it, I’d have no clue what those bikes were sitting there for."

The city just recently created marked parking spaces that they hope riders will use instead of leaving bikes in spots that block pedestrians.