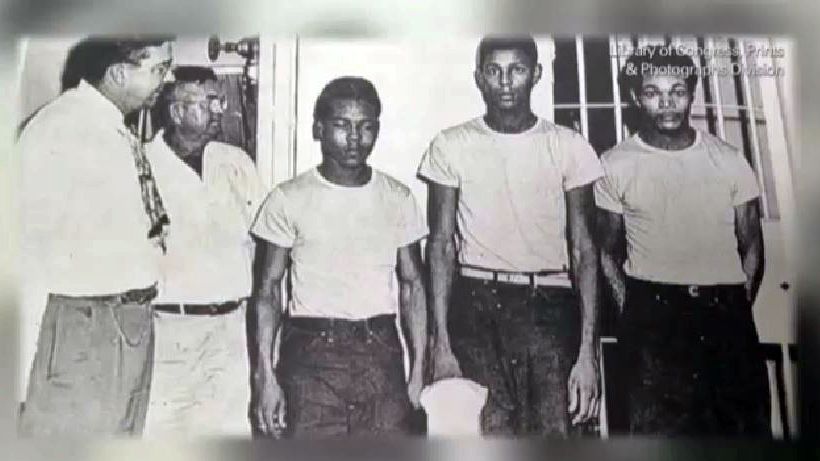 Sheriff McCall with three of the "Groveland Four" suspects next to him. (Spectrum News image)

While the City of Groveland and the Florida Legislature has apologized, on Friday there could be closure by way of a pardon that would clear the men's names forever.

Four African American men were wrongly accused of raping a white woman, then 17-year-old Norma Padgett, in 1949 in the Lake County city Groveland. She claimed to authorities she was assaulted by four black men.

One of the men, Ernest Thomas, was shot and killed by a posse before ever making it to trial. The other three men, Charles Greenlee, Samuel Shepard, and Walter Irvin were convicted by an all-white jury with dubious evidence.

They were eventually granted a retrial by the Supreme Court, but before the trial, Shepard and Irvin were gunned down by Sheriff Willis McCall. Shepard ultimately died.

McCall claimed the handcuffed men tried to attack him.

"Acquittals were unheard of in the South for blacks that were accused of those types of things. They were just trying to stop them from getting the electric chair," said Paul Perkins Jr., who's father represented the men in their second trial.

Norma Padgett is still alive. Spectrum News asked Perkins why she wouldn't recant her story now to clear the men's names. He says a witness and a medical doctor who examined Padgett testified there was no evidence she'd been raped.

"I can't explain it and wouldn't try to. I don't know if she's convinced herself, or there's so much pressure on her," he said.

Perkins added, "Imagine if she was to recant her story now. The notoriety that would be put on her on her family -- negative notoriety in fact."

Gov. DeSantis has said he wants to consider a pardon for the men. Florida Agriculture Commissioner Nikki Fried has also been a vocal advocate for clemency.

The state's clemency board consists of the governor, attorney general, agriculture secretary, and chief financial officer.

Perkins says he's optimistic about DeSantis and his cabinet's discussion to grant a posthumous clemency for men, saying that in his own personal conversations with the men's families, the pardon would go a long way for them.

The Central Florida Urban League, which has advocated for the Groveland Four and their families for decades, says they’re “eagerly awaiting” the results of the clemency board meeting.

On Friday, January 18, the group will host a panel discussion with author Gilbert King, who wrote a book detailing the Groveland Four case. Read the full release for more information.

Information from the Associated Press was used in this story.