1 of 4
The aftermath of a fiery crash on Interstate 75 is seen in a screen capture from drone video Friday. The crash south of Gainesville left 7 people dead, including the drivers of 2 semitractor-trailers and 5 children in a church van heading to Disney World. (Tony Rojek/Spectrum News) 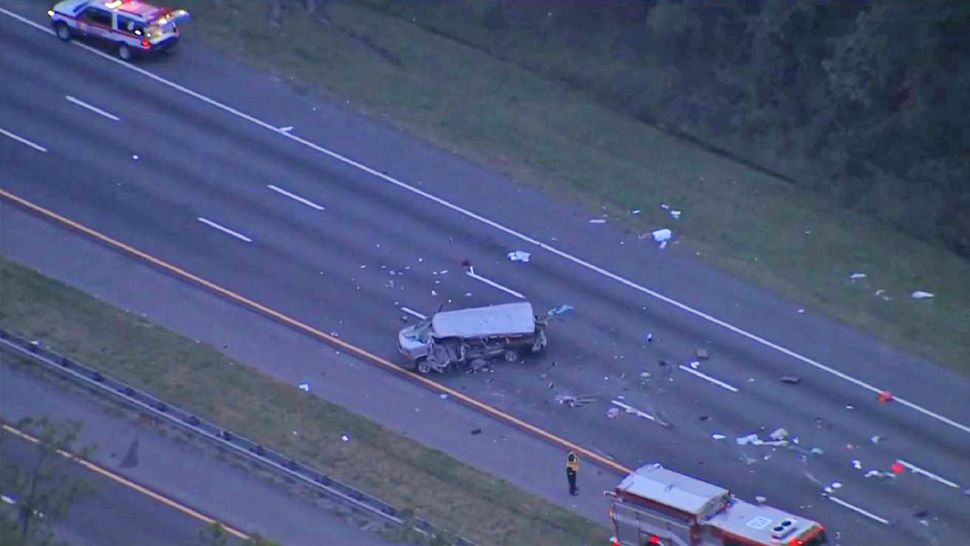 2 of 4
Sgt. Thomas Dillion of the Florida Highway Safety and Motor Vehicles confirmed that the passenger van involved in the crash was a church van "that was en route from Louisiana to Orlando." (Sky 13) 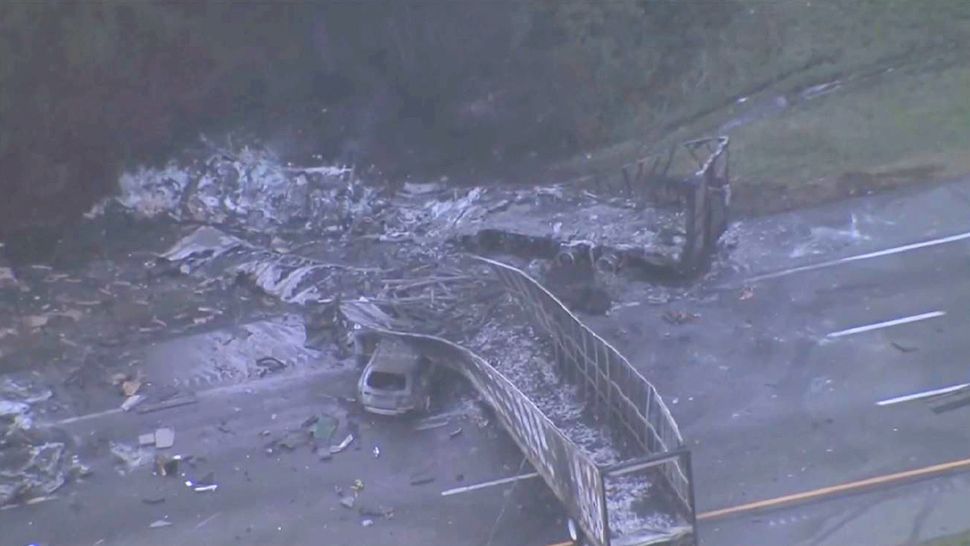 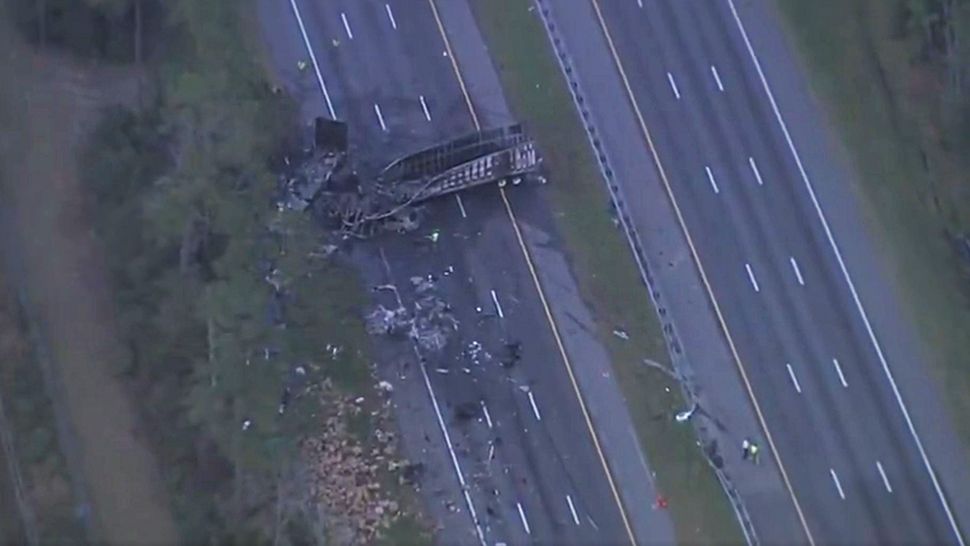 4 of 4
A major vehicle crash on Interstate 75 in north Central Florida killed 7 people and sent at least 6 to hospitals, authorities said. (Sky 13)

FHP: 5 Kids in Church Van On Way To Disney Among 7 Killed in I-75 Crash

ALACHUA, Fla. — Five children in a church van heading to Disney World were among seven killed in a fiery crash on Interstate 75 near Gainesville, troopers said Friday.

All southbound and northbound lanes on I-75 have reopened after the crash on Thursday.  FDOT crews worked overnight Saturday to repair a portion of the roadway near mile marker 394 that was damaged in the fiery crash.

The deadly crash happened at about 3:45 p.m. and involved the church van — which was full of people headed from the Marksville area of Avoyelles Parish, Louisiana to the Orlando area — two semitractor trailers and one midsize sedan, troopers said.

"My information was that they (in the van) were destined for Disney," FHP Lt. Patrick Riordan said Friday.

According to FHP investigators, one of the semi trucks and a passenger vehicle collided in the northbound lanes. After that collision, both of those vehicles traveled through the guardrail, crossed over the median and into southbound I-75.

In the southbound lanes, the semi truck that crossed over then struck a southbound semi truck and the church van. After the rigs hit each other, they caught fire.

The van overturned, ejecting some of the occupants.

"We had a fifth vehicle that came through and struck either some of the occupants that had been ejected or some of the debris in the roadway," Riordan said.

The crash left seven people dead, which included the five children, plus the adult male drivers of the two semi trucks.

The five children who were in the church van were all from Marksville, Louisiana:

The two semi truck drivers were:

"My heart breaks for all involved," Troy Roberts of the Florida Department of Transportation said.

Contributing to the severity of the crash was 50 gallons of diesel fuel that spilled across the interstate during the crash.

"In a homicide investigation, we look at a lot of things. We look at certain cause and effect. We look at drivers, weather, we look at roadway, we look at tires. There are many things that come into an investigation of this magnitude. Absolutely will be looking into drivers and what contributions or causes they were involved in," Riordan said.

According to the Associated Press, court records show one of the truck drivers, Steve Holland, was ticketed several times between 2000 and 2014 in Florida, Pennsylvania, Ohio, Indiana, and Virginia for violations including speeding, driving an unsafe vehicle, driving an overloaded vehicle, and not carrying proof of insurance.

Troopers said they haven't determined whether the occupants of the church van were wearing seat belts.

One resident who lives in the area said the crash sounded like a sonic boom.

"There are accidents on I-75 all the time, (and) we've had more deaths here on I-75 on this stretch than you could imagine," said Roger Stephens, an Alachua County resident.

The crash also created a huge debris field that is taking awhile to pick up.

Troopers in a news release stated they had not confirmed the number of people transported to two hospitals, though Sgt. Tomas Dillion of the Florida Highway Patrol said Friday morning that eight people were hurt and taken to UF Health Shands Hospital and North Florida Regional Medical Center.

The Avoyelles Parish School Board in Louisiana issued a statement about the crash.

"We are deeply saddened by the news of the terrible accident that a church youth group from our parish was involved in," a message on the Avoyelles Parish School Board's Facebook page said. "... No family (including the APSB family) should have to go through this. We will help however we can. For now, please know that our thoughts and prayers are with these families. Please also know that we will do everything that we can for our students and staff most affected by this tragic event. All of our love goes out to each of them."

The FHP has not released the names of the victims.

Thursday's crash was the worst crash on I-75 in Alachua County since January 2012, when 11 people died in a chain-reaction crash attributed to heavy fog and smoke on the roadway. The state responded by installing cameras, sensors, and large electronic signs to help prevent similar crashes.

"There are no words to convey the sorrow we feel for those involved in yesterday’s tragedy," Walt Disney World spokeswoman Jacquee Wahler said in a statement. "We extend heartfelt condolences to the families and loved ones impacted by this tragic accident."

Report: One victim was a pregnant woman

A pregnant woman was one of three adults and nine children in the church van, according to a Facebook post from an affiliated Pentecostal church. The children ranged in age from 8 to the mid-teens.

The post was by the Lighthouse United Pentecostal Church Omaha via Rev. Kevin V. Cox, who's identified as the church's Louisiana district superintendent.

The post erroneously stated that the pregnant woman had given birth.

The AP reported that an unidentified volunteer at the Avoyelles House of Mercy church in Marksville said the congregation lost "half of our babies."

The left lane has been opened and the Gainesville Transportation Management Center tweeted that the center lane of I-75 was open.

After rush hour, FDOT crews planned to reclose the center lane so they can resurface that part of the road, which was damaged by the fire and crash.

Roberts said emergency crews would work through the night to repair the section of I-75 that was damaged by the fire, though rain was expected Friday afternoon, which could slow repair work.

Asked whether the barrier was designed to prevent vehicles from moving into opposite lanes, Roberts said he could not speculate on that and that their focus right now is to repair the roadway and get all the lanes back open.

"... but that is one of the things we will look at in the coming days, any other safety measures that could have possibly kept this crash from happening," Roberts said.

Jerry Hume, Anthony Leone and Audrea Huff contributed to this story. Information from the Associated Press was also used.