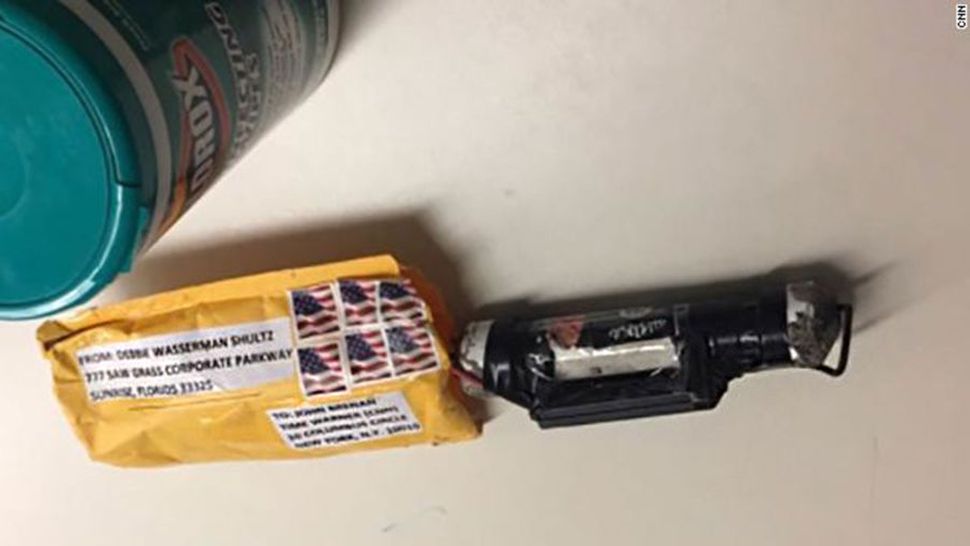 1 of 3
This is the explosive device was sent to CNN on Wednesday, October 24, 2018. The return address was from the office of Democratic Rep. Debbie Wasserman Schultz. (New York Police Department) 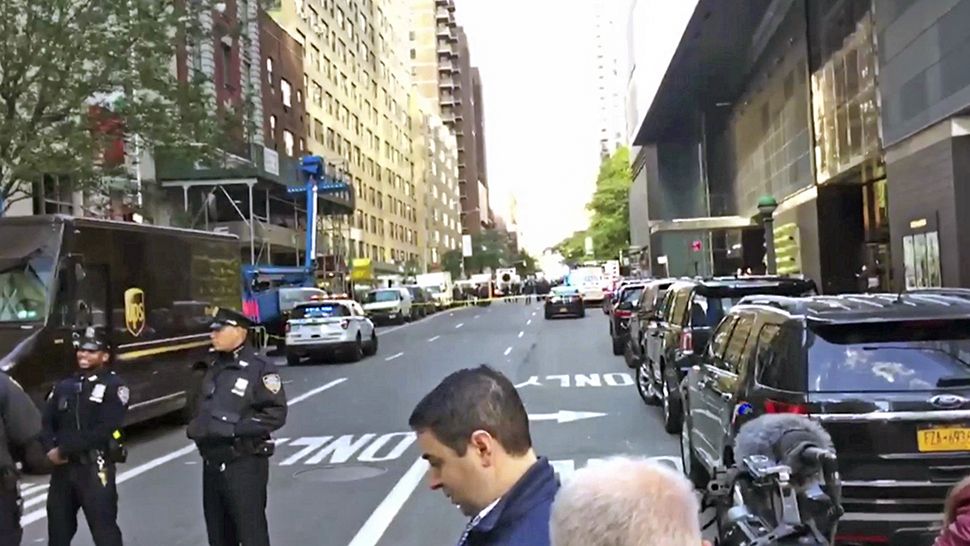 2 of 3
Police work near CNN's offices after they were evacuated because of a suspicious package on Wednesday, Oct. 24, 2018, in New York. (AP Photo) A law enforcement official says the pipe bombs that were sent to several prominent Democrats and CNN were packed with powder and shards of glass.

The official says the devices were made from PVC pipe that was about six inches long and covered with black tape.

The official says each device also had a small battery, similar to a watch battery. They didn't say whether the powder was explosive.

A second package addressed to Rep. Maxine Waters appears similar to bombs sent to Democrats in New York and Washington, D.C., and has been intercepted at a Los Angeles mail facility, according to a law enforcement official.

The official, who spoke to AP on condition of anonymity, said the package has similar markings and characteristics to the others that had been discovered this week.

The U.S. Capitol Police confirmed it is investigating a package sent to Rep. Maxine Waters. It was found at a facility that screens congressional mail in Maryland earlier Wednesday.

Capitol Police spokeswoman Eva Malecki said the Capitol Police are also working with local law enforcement agencies in Florida. All of the packages had a return address of Rep. Debbie Wasserman Schultz, a Florida Democrat.

Meanwhile in New York City, Police Commissioner James O'Neill says they were reviewing security video to try to identify a courier that may have delivered the package containing a pipe bomb to CNN's office.

The FBI released a full statement regarding the suspicious packages sent over the last few days.

It says it is investigating 5 of the packages found in the last two days. It makes no mention of a package reportedly sent to Rep. Maxine Waters in Washington, D.C.

#FBI Dir. Wray: "This investigation is of the highest priority for the FBI. We have committed the full strength of the FBI’s resources and, together with our partners on our JTTFs, we will continue to work to identify and arrest whoever is responsible for sending these packages."

The FBI says five packages are being analyzed at the bureau's lab in Virginia.

The agency says each package had a return address of "DEBBIE WASSERMAN SHULTZ," a misspelling of the Florida congresswoman's name.

The FBI confirmed all of the packages had printed address labels and six stamps.

Wasserman Schultz says two of her district offices, in Sunrise, Florida, and Aventura, Florida, were evacuated after reports of a suspicious package at the Sunrise office.

Aventura police had Miami-Dade police investigate a suspicious package at that office, and it was deemed safe.

Wasserman Schultz says she will "not be intimidated by this attempted act of violence," adding, "This appalling attack on our democracy must be vigorously prosecuted."

She said she is "deeply disturbed by the way my name was used" in the attack, but will continue her work in Congress.

The Time Warner Center in New York City, where CNN is headquartered, has reopened and people are going back inside.

The Washington D.C. police tweeted out a picture of one of the packages that have been intercepted. They are asking residents to call 911 if they see one.

Multiple packages containing possible explosive devices, similar to the one pictured below, have been located in NY & DC.

If you see any suspicious activity similar to these incidents, please do not hesitate to call 911. #DCPolice #HereToHelp pic.twitter.com/Op3PJDxJm7

The addresses are blurred, but it appears the return address on the package includes "Sunrise, Florida." Packages sent to CNN Headquarters and to former Attorney General Eric Holder had return addresses for Rep. Debbie Wasserman Schultz's Sunrise office.

Multiple media outlets are reporting a similar package was addressed to California Democratic Rep. Maxine Waters, and was intercepted at a mailing facility in Maryland. The package is being investigated.

In South Florida, Aventure Police say they are investigating a package sent to a government office building where Rep. Debbie Wasserman Schultz has a satellite office. This is being done as a precaution because her Sunrise office received a package.

"As we speak, the packages are being inspected by top explosive experts, and an investigation is underway. We will spare no resources or expense in this effort," President Donald Trump said during a signing ceremony for the opioid bill in Washington, D.C.

"We have to unify, we have to come together and send one very clear, strong, unmistakable message that threats or acts of political violence of any kind have no place in the United States of America," the president said.

The president said the statement is a bipartisan sentiment that he's heard from all sides.

"This egregious conduct is abhorrent to everything we hold deal and hold sacred as Americans," he added.

"We're extremely angry, upset, unhappy about what we witnessed this morning."

"We cannot tolerate those cowardly attacks and I strongly condemn all who choose violence," she said.

“The safety of the American people is my highest and absolute priority.”

He says he just concluded a briefing.

“As we speak, the packages are being inspected...and a major federal investigation is now underway.” pic.twitter.com/AWr3rtHh4z

The device that was sent to New York Gov. Andrew Cuomo's office was not an explosive device, but a flash drive, according to the New York Police Department.

CNN President Jeff Zucker said that the powder found inside the package in the mail room of the New York officer will take time to examine to determine what it is. However, Zucker, also mentioned that it will take time to know when the building is safe to enter.

The San Diego Union-Tribune, which was forced to evacuate earlier in the day due to a suspicious package, was allowed back open. The five boxes that were discovered outside were filled with everyday items.

During a news conference on Wednesday afternoon, New York City Police Commissioner James P. O'Neill confirmed that there was a suspicious package at CNN's headquarters and that it was a live explosive device, accompanying with an envelop with white powder.

"We've seen this before. We've seen worse, and we will not be intimidated," said O'Neill.

No other threats were received in the city, but there will be an increased in police presence.

New York Gov. Andrew Cuomo praised law enforcement for its service and professionalism. He also mentioned that a number of packages that were detected at the Clintons' home.

"This is the world we live in," he said and mentioned the 1993 terror bombing of the Twin Towers and said that New York is an international icon and target. "Terrorism will only work if you let it work."

Cuomo said that New Yorkers are tough and will not allow terrorists to win. He also called the packages a terroristic attempt, but did not say if it was a national or international threat.

Cuomo admitted that a device has been sent to his office in Manhattan.

A FBI special agent said the investigation actually began on Monday night with a package delivered to Clintons' residence in Westchester County. Then, the device was intercepted late Tuesday night that was headed for the Clinton residence.

An identical package addressed to Obamas sent to Washington.

The devices appear to be pipe bombs.

While not naming anyone, officials urged political leaders to not threaten journalists. During a speech earlier in the week, President Donald Trump spoke about how Greg Gianforte, now governor of Montana, body slammed a reporter, with the president saying, "Any guy that can do a body slam, he's my kind of guy."

The San Diego Union-Tribune staff and other businesses have evacuated after a suspicious package was spotted.

The Sunrise Police Department tweeted that it is investigating a suspicious package near Sawgrass Corporate Parkway and is advising people to stay out of the area of NW 8th Street and NW 136th Avenue.

The Broward Sheriff's Office tweeted that the bomb squad is on the scene.

A news conference about the suspicious package will be at 12:45 p.m., Wednesday. You can watch it here.

According to an official who was not authorized to publicly talk about the investigation, the device was a "functional explosive device," the Associated Press reported.

On Wednesday morning, another package, addressed to Obama at his Washington, D.C. home, was intercepted as well by the agency, the Secret Service reported.

"The packages were immediately identified during routine mail screening procedures as potential explosive devices and were appropriately handled as such. Both packages were intercepted prior to being delivered to their intended location. The protectees did not receive the packages nor were they at risk of receiving them," commented the Secret Service.

The Time Warner Center, headquarters of CNN, has also been evacuated over a suspicious package.

Law enforcement officials are not taking any chances and are trying to determine if these incidences are related.

They evacuated The Time Warner Center after finding a suspicious package in the mail room there.

There were reports Wednesday morning that a suspicious package had been addressed to the White House, however, the Secret Service is saying that is not the case.

They did intercept packages addressed to Hillary Clinton in West Chester County and a package that was found at a mail-sorting facility addressed to former President Barack Obama. All former presidents' mail is screened away from their homes.

During a speech at a gathering in Florida on Wednesday, Clinton said her family is fine and thanked the men and women of the Secret Service for stopping the package before it could get to their home.

"Every day, we are grateful for their service and committment. And obviously, never more than today. But it is a troubling time, isn't it?" she said, adding that she is worried about how the world is changing.

She said it was a difficult time for the country and that Americans need to come together.

Spectrum News has been told that authorities had to detonate these packages themselves; the procedure is that they move the package off site to an area where they can safely detonate them to see what exactly is inside.

These incidents could be linked to a pipe bomb that was sent to liberal billionaire George Soros' home. The package that was sent to Soros, who is a major donor to the Democratic party, actually did make it into his mailbox.

That mailbox is located far away from his home and officials were able to safely detonate that one as well.

In Florida, the Sunrise Police Department is investigating a possible suspicious package at a city building where Rep. Debbie Wasserman Schultz has an office in.

"These terrorizing acts are despicable, and anyone responsible will be held accountable to the fullest extent of the law," stated White House spokeswoman Sarah Huckabee Sanders in a statement.